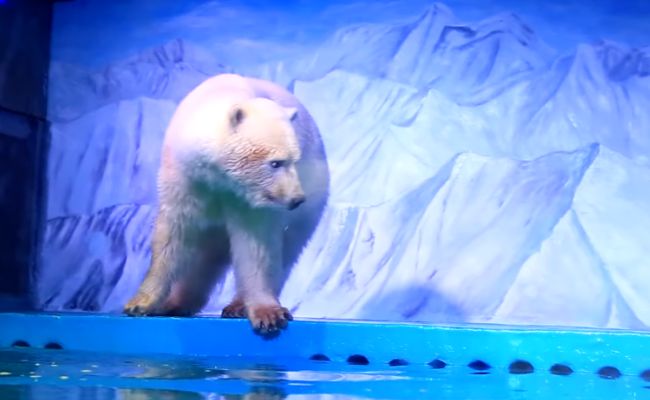 The polar bear has not been moved but there are good news for her. She will be temporarily move to a zoo during an upgrade to the mall. Pizza, the three year old female polar bear, caught the attention of the world when pictures and videos of her standing in the corner of the aquarium surfaced. The malls social media account said that Pizza the polar bear will temporarily leave and return to her birthplace.

The pictures and videos of the polar bear living at the mall first surfaced in July and petitions have asked the mall to find her a new home. Animals rights groups have also asked for the polar bear to remain at the zoo, where she will live while the upgrades are done to the mall.

Last month, experts mentioned that Pizza the polar bear was showing signs of mental decline after seeing her behavior on video. The move might only be for a few weeks or months but it is good news for the polar bear as she will finally get to see something other than the aquarium. She will reportedly be reunited with her parents while the mall and ocean theme park area are renovated. There are currently at least three petitions asking for the animals there to be moved or for the aquarium to be closed. Animal rights groups are asking for Pizza’s move to be made permanent.