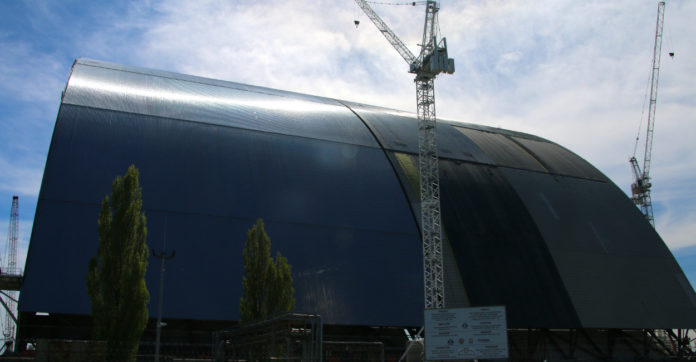 A giant shield is now covering the scene of the worst nuclear accident in history. The steel shield, designed to stop radiation leaks, began moving to the damaged reactor a few days ago.

The steel shield, which was built away from the site because of the dangerous radiation still above the reactor, began moving a few days ago but only a few feet at a time. On Tuesday, Ukraine President Petro Poroshenko, diplomats and those who worked on the shield attended a ceremony to announce that it had been completed and pay tribute to those who risked their lives building the sarcophagus right after the accident.

The Chernobyl disaster, which happened 30 years ago, killed 28 of the site’s 600 workers in the first four months after the accident. The explosion happened in one of the four nuclear reactors at the Chernobyl power station. Estimates say 50 people lost their lives as a direct result of the accident but estimates say thousands more were affected.

Construction of the sarcophagus began just three weeks after the accident. But it’s been 30 years since the concrete structure was built and the shield was completed to prevent a collapse of the sarcophagus from affecting the area.

The shield started sliding towards the reactor a few days ago and now that it’s in place, workers will now focus on dismantling the sarcophagus. The concrete structure will be removed by remote controlled cranes and all work is scheduled to be completed in a year.

More than 350,000 people were told to evacuate nearby areas after the explosion. Most areas remain empty as the radiation levels were too high to return. The residents of Pripyat were first told they would be evacuated only for three days but the town remains empty after 30 years.

Suma Chakrabarti, President of the European Bank for Reconstruction and Development (EBRD), said the old shelter had now disappeared but that they were never going to forget the human toll of the 1986 accident.

The dismantling of the sarcophagus and the rest of the work will be completed in November 2017.