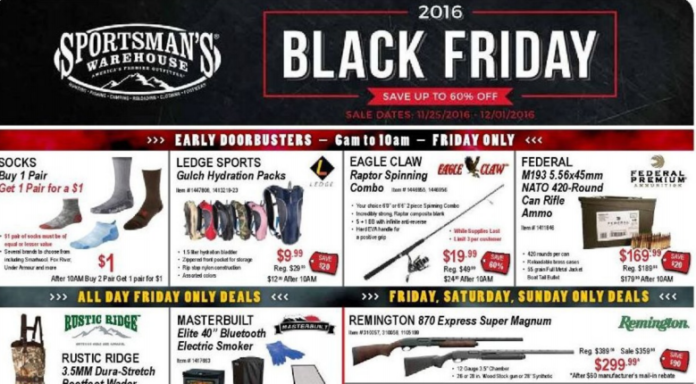 Sportsman’s Warehouse bills themselves as “America’s Premier Outfitter” and if you live on the West Coast, that’s very true. They have 18 locations, mostly around the Southwest. If you’re looking for Black Friday deals on any sort of firearm, camping or fishing equipment. They also have sales on ammunition and outdoor clothing.

The Sportsman’s Warehouse Black Friday ad for 2016 was just leaked online, and they offer massive savings on many of their more expensive items, including generators and smokers. To see all of their sales, tap the image at the end of the article, but for some of the highlights, read below.

The biggest deals at Sportsman’s Warehouse are on their firearms, but they have plenty of other sales on firearm accessories and ammo, fishing poles and reels, and thermal underwear and coats. And one thing that’s great about these deals is that most of them are valid through the end of the month.

When does Sportsman’s Warehouse open for Black Friday?

Sportsman’s Warehouse will open Friday, November 25, 2016, at 6:00a.m. and stay open until 9p.m., when they normally close. But again, almost all of these sales are valid until December 1st.

All of these deals are only available in-store.

If you keep your receipt, you can return the item within 30 days for a full refund. Unfortunately, you can’t return these items: 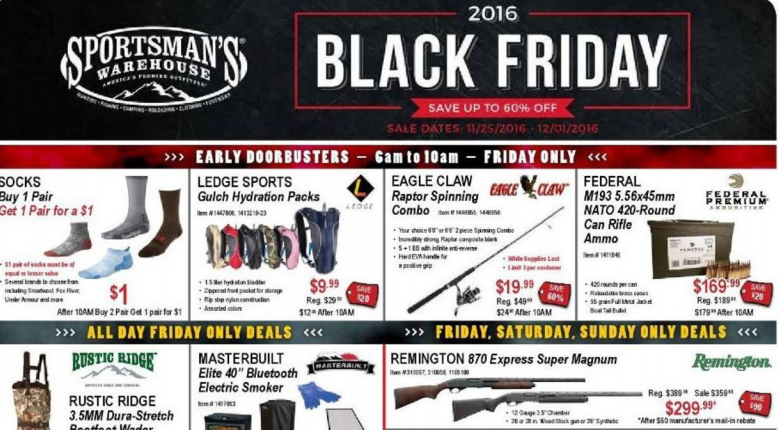 Morgan Sennhauser
Morgan Sennhauser is a thoroughbred millennial, who has focused on working against censorship and surveillance in Africa and the Middle East. Now living in North Carolina, Morgan spends his time advocating for minority groups in impoverished regions, and writing about related topics.
RELATED ARTICLES
Sports