Syria: East Aleppo’s Last Hospital Out of Service After Airstrikes 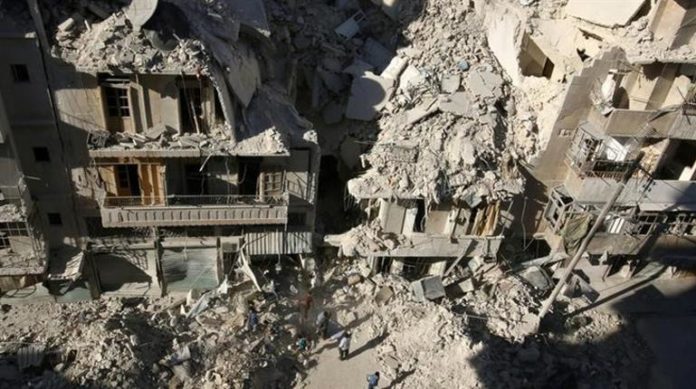 Five hospitals have been destroyed by the recent airstrikes in east Aleppo. The last operating hospital was destroyed on Saturday, leaving the population without anywhere to go for a surgery or treatment. Doctors and nurses at the hospitals helped evacuate babies and patients to safety after the airstrikes.

The last operating hospital in east Aleppo had to be closed after an airstrike hit the area. On Friday, the city closed four other hospitals that were also destroyed by airstrikes. Reports say the airstrikes have left the city of Aleppo without a single hospital working at full capacity. A total of five hospitals in the area have been forced to close in the last few days.

Medecins Sans Frontieres (MSF) said that there have been more than 30 attacks on the hospitals since July. Organizations and agencies helping the population said the recent airstrikes in the area were war crimes. David Nott, a surgeon who volunteers to work in disaster and war zones, said that they all have been repeatedly attacked over the last few days. He added that at least two doctors had lost their lives.

Most of the hospitals, which had been working with low supplies, have been forced to close with the recent airstrikes. Those that were working were not in full capacity but the latest attack has left the city without a hospital. East Aleppo has a population of 250,000 people and it was reported earlier this month that the area had just 30 doctors. The total population of Aleppo has dropped in the last few years and estimates say it is now under two million. The 250,000 people are thought to be trapped in east Aleppo, which has been affected by airstrikes in recent months.

The population of east Aleppo is said to have little food and medical supplies but recent clashes have made it difficult for organizations to help the residents. No aid has entered the city since July and aid workers distributed the last available food rations two days ago. Agencies are now looking to reach a deal that will allow them to deliver aid to the 250,000 people living in east Aleppo.

All hospitals in east Aleppo are now out of service and with just 30 doctors working in the area, the situation could get worse for residents as there is no access to surgery or medical care. Estimates say between 300,000 and 400,000 people have lost their lives since the Syrian civil war began in 2011.