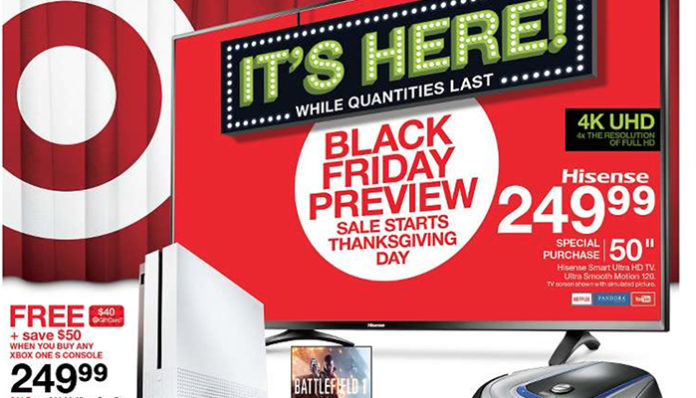 Originally founded at the start of the 20th century by businessman George Dayton, Target was originally established under the name of “Goodfellow Dry Goods” in 1902 prior to eventually being renamed to “The Dayton Company” in 1910. Since their humble beginnings, the company has grown to become one of the biggest discount retailers (second only after Walmart) in the United States. Since the opening of their first store under the name of “Target” in Roseville, Minnesota back in 1962, the company has expanded to encompass well over 1700 store locations across the countryーwhich is not all too surprising considering the fact that they gross an annual amount of approximately $3 billion. Serving millions of Americans every year, Target sells a wide variety of items from clothing, electronics, house ware supplies to furnitureーanything that you’d need in a home, they’d have it!

A regular participant in the annual Black Friday events, Target has once again slashed the prices of hundreds of items this Thanksgiving season. For those of you who are tech-savy, you can even gain early-access to their incredible deals both in-store and online with the use of their Cartwheel app. With so many offers and discounts to be had at the store of red and white, there’s no doubt that Target is going to be jam-packed with eager shoppers on the three day weekendーto make sure that you’re able to grab everything that you’d like off the shelves in time, it’s highly recommended that you visit your local location early. According to their 2016 Black Friday ad, Target will be opening their doors for Black Friday at 6PM on Thursday, November 25th, 2016. Remember to get there early to beat the line-ups and build-ups of cars in the parking lot!

Whether you’re shopping for a new Fit Bit for yourself or Christmas presents for others, Target has got you coveredーeverything from Xbox Ones to Giant-Sized Jengas, and more! In addition to their fantastic deals, they will also be offering exclusive doorbuster discounts on items such as The New Nintendo 3DS, Kindle Readers, Smart TVs, Playstation 4 Games, and so much moreーall the more reason to be one of the first ones in line as quantities are limited. For your shopping convenience, we have compiled a list of some of Target’s best offers to be had this Black Friday weekend. Of course, we won’t be able to mention everything (otherwise you’d be scrolling for hours); everything on our list are therefore simply highlights. If you’d like to view the full scan of Target’s 2016 Black Friday ad, you can do so at the end of this article.

Offering users a wider range of controls compared to earlier models, The New Nintendo 3DS has a faster processor and presents flawlessly smooth graphics. The limited edition Super Mario edition of the console is available in two classic coloursーblack and white, both of which feature a subtle print of the Mushroom Kingdom. Be sure to get your this Black Friday, they probably won’t be getting cheaper than this anytime soon.

Impress with friends with this modern, app-enabled hoverboard! Available exclusively at Target, not only is it capable of playing music via Bluetooth, but it also features customizable LED lightsーhow’s that for eye catching? With the use of the Jetson Ride Ready App, you can even track your logs and share your rides easily through social media! What if you lose the hoverboard? No worries, it even comes with its own “Lost My Hoverboard” feature.

Keep an eye on your little one with this two camera baby monitor! Complete with infrared night vision and a room temperature display, it can be used within a 1000 foot radius. Featuring two way communication, you’ll be able to talk as if you’re in the same room as your baby. The video monitor measures to be 4.3″ diagonally, and can be zoomed and tilted.

Lightweight and easy-to-use, this Dyson vacuum runs nicely on all floor-types and is great at navigating around narrow areas and furniture. It comes complete with two separate toolsーa head with soft bristles for dusting and another designed for the cleaning of stairs and corners. Made from the same types of materials as those used to create riot shields and crash helmets!

Perfect for those just getting into photography, this DSLR bundle includes the Wi-Fi ready Canon T6 bodyーthe latest entry-level device released from the Japanese company. Complete with two separate lens, the 18-55mm and 75-300mm, there are definitely some nice photos waiting to be taken. On top of everything, the kit also comes with a 16GB SD Card and a bag to store the camera in!

Now you can play some of the latest games from Sony on the slim Playstation 4 console system! Wifi-enabled, you can even battle against your friends from across the world online. Aside from the matching wireless DualShock 4 controller that it comes with, a copy of Uncharted 4 will also be included in the priceーtalk about savings!

Track your exercise, calories burnt, heart rate and sleep patterns with the Fitbit Charge HR. The activity wristband will continuously log your everyday activityーfrom steps taken to distance ran, and more. On top of being able to access your real-time stats during your workout, you can even sync them wirelessly to your smartphone or computer. Every beat counts.

Enjoy some of your favourite entertainment content in ultra high definition with this 50″ inch Samsung TV. With the use of Micro Dimming Pro and Wide Color Enhancer technology, it delivers much greater clarity and a fuller spectrum of color. Powered by a Quad-Core Processor, the smart TV features built-in Wi-Fi and is Netflix ready. Comes with two USB and three HDMI ports.

Say goodbye to manual vacuuming! This bluetooth enabled robotic vacuum uses modern Questnav technology to maneuver itself around obstacles such as furniture while ensuring the surface that it’s on gets a thorough cleaning. Smart enough to avoid falling with its built-in sensor, it can run for up to 90 minutes at a time before needing a recharge at its docking station.

Engineered with the power of dual-driver acoustics, these sleek and lightweight headphones are designed to offer its users premium sound and peformance. Water-resistant with a comfortable fit, you can easily take hands-free calls and switch songs with its no-slip grip. Available in a number of colors including green, blue and red.

Easily watch your favourite movies and TV shows in 1080 high definition! The Apple TV connects wirelessly via AirPlay to stream your entertainment in stunning detail on your television. With built-in Wi-Fi, you can effortlessly buy or even rent the latest titles onto your HDTVーyour options are truly endless!

Featuring a powerful quad-core processor, this Android-running tablet comes preloaded with popular apps and is ready to be used as soon as it comes out of the box! Complete with a stunning 10.1″ LCD display, you can play games and even watch movies and other videos. This exclusive bundle also comes with a wireless Bluetooth keyboard, noise-cancelling earbuds and a soft neoprene carrying case.

Immerse yourself in an extraordinary sound experience with these wireless Solo 2 On-ear Headphones. With its noise-cancelling ear cup paddings, you’ll be that much closer to what you intend to hear. Foldable and compact, it’s the ultimate accessory for any music lover. Even if its battery runs out, you can plug it in for unlimited wired listening.

Easy to fly, this standard drone is perfect for beginners. Capable of flying for up to 25 minutes from a single charge, its advanced stabilization technology offers some of the best movie quality available. Its integrated aerial camera takes stunning 12 megapixels photos and 2.7K videos in high definition. You can even enjoy its view from a live 720P HD video feed!

A copier, printer and scanner all in one, this HP machine features automatic two-sided printing, a LCD color display as well as dual paper traysーyou can even easily print from your mobile phone! Complete with an SD Card slot, you can easily access your media. Why have three separate devices when the HP Envy 5663 can do everything?

Now you can purchase and play some of your favourite 3DS titles for cheap! Some of the games available include Pokemon Alpha Sapphire, Pokemon X, Super Smash Bros for Nintendo 3DS, and Kirby Planet Robobot. Limited quantities, titles may vary from store to store.

The Legacy Edition features two gamesーModern Warfare Remastered and Infinite Warfare. The perfect gift for every Call of Duty fan, it comes with three separate game modes: Multiplayer, campaign and zombies. For those who like to team up, you can even play with (or against) your friends online through Wi-Fi!

Featuring lowered prices (50% off) for dozens of PS4 and Xbox One games, now’s your chance to add to your collection. Some available titles include Madden NFL, Gears of War 4, Skyrim, Fifa17, Grand Theft Auto, Mafia III, and more! See your local store for additional titles.

Enhance your game experience with the official PS4 Dualshock Wireless Controller. With a revolutionary touch pad, build-in speakers and a integrated light bar, it offers exciting new ways for you to interact with the in-game world. Easily rechargeableーsimply plug it into your console system, or with any standard micro-USB charger.

Keep in mind that these are only some of the items listed on Target’s 2016 Black Friday adーthere are so many fantastic deals, we almost ran into some difficulty when choosing which ones to highlight! Considering that Target practically sells everything from food, to clothing to electronics, there really isn’t much nothing to lose by visiting one this Thanksgiving weekendーyou could get everything that you want, all in one store! How convenient. So why not grab a coffee, and take a good look at their 40 page flyer, chances are there’s at least one thing that you could do with having (especially with its unbelievably marked down prices)!

When does Target open for Black Friday?

Target will be launching their 2016 Black Friday deals on Thursday, November 24, 2016 although there are also some offers to be had on Wednesday. Please view the complete ad scans for more details.

On Thanksgiving day, Target will be opening its doors at 6PM for one of the busiest shopping days of the year. Depending on the specific store, they will be closing anywhere from 10PM to Midnight that night. On Sunday, November 26, 2016, Target’s holiday hours will be going into effectーplease look up your local store hours on their official website as it varies location from location.

Similar to previous years, Target will be offering Black Friday deals both online and in physical stores.

Most items returned in new condition will be eligible for a full refund or exchange within 90 days of the original purchase. Some exceptions apply, please visit their website or ask a store associate for more details.

If you’d like to view the complete ad scans for Target’s 2016 Black Friday blowout sale, you can do so by clicking the image below: 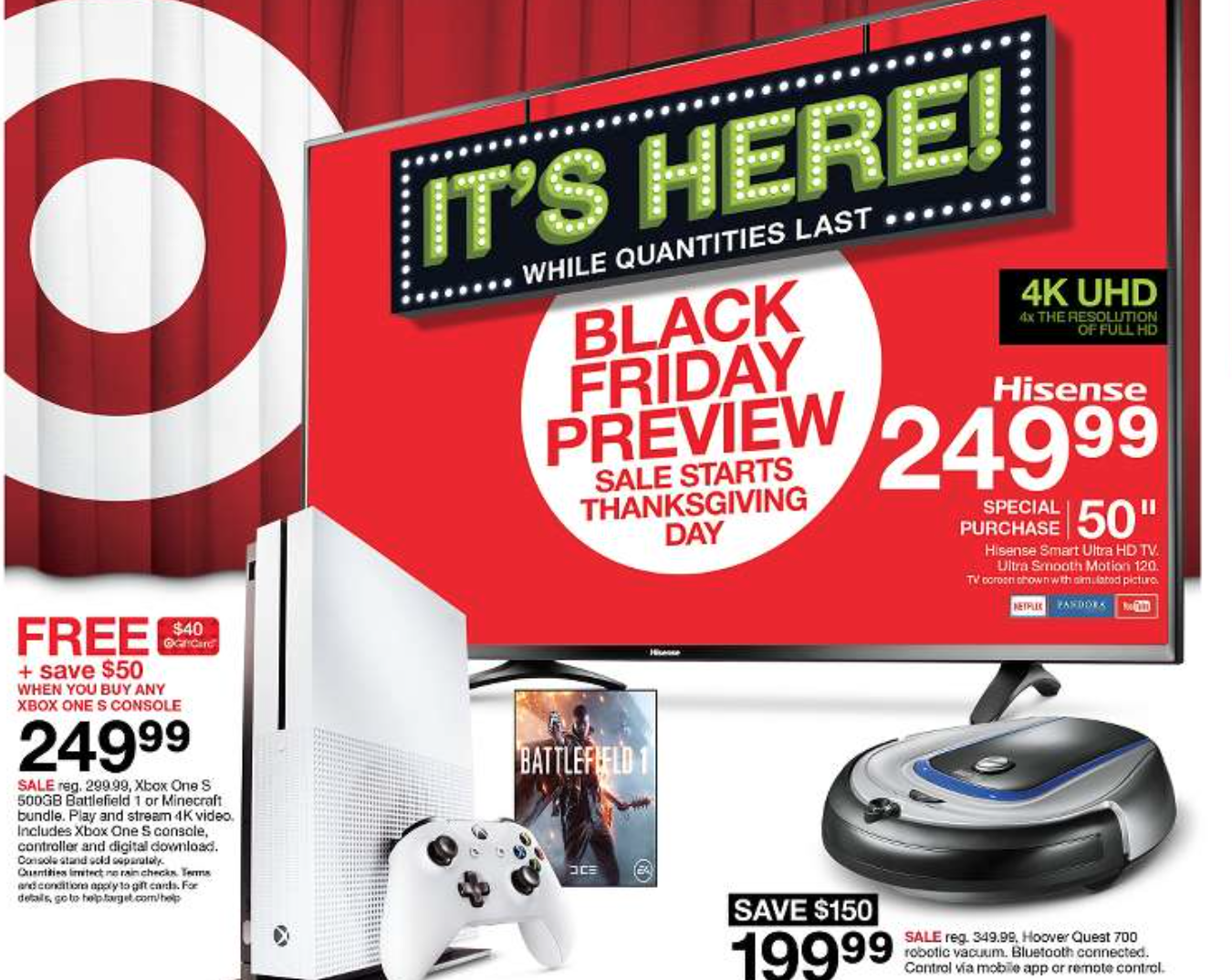