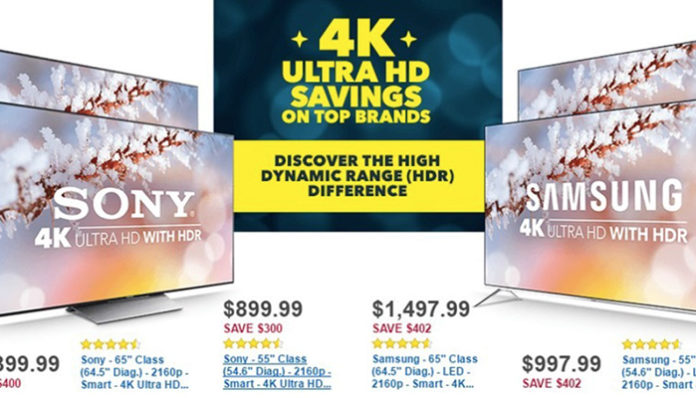 Black Friday is fast approaching and most of us are trying to locate the best dealsーit is one of the country’s biggest sale events after all. This upcoming Thanksgiving holiday, stores all around will be dropping their prices, making it an incredible opportunity to snag up some amazing deals. From books to laptops, everything will be coming down in price this coming weekend. While countless items will be reduced, electronics tend to be especially popular amongst shoppersーin fact, many of us probably wait to buy them exclusively during the annual Black Friday event. Taking into account their regular (costly) price tags, it’s no surprise that individuals grab them during Thanksgiving, when they’re discounted to be only a fraction of their normal cost. While there’s no doubt that there are thousands of electronic bargains to be had, we’ll be focusing our attention on Black Friday LED TV deals in this article.

Thinner and considerably more lightweight than their CRT counterparts, LED televisions have significantly exploded in popularity within the last decade. The most widely produced and sold type of TV display, LEDscreens are quickly becoming a staple in the average household. More compact than the previously popular plasma TVs, LED televisions are more compact, take up less room, and are not prone to burning in. Perfect for watching movies, playing games or even tuning to the local news, LED TVs are one of the fastest sellers in terms of modern electronics. Still continuing to climb in popularity, LED TVs are manufactured and produced by a number of big-name electronics companies such as Sony, Samsung, LG, Aquos, Panasonic, to name a few. However while they’re great for enjoying entertainment, LED televisions can be costlyーespecially if it’s one from a well renowned brand. Of course, as you go up in screen sizes, the price tag will also consequently go up as well.

Although it’s not uncommon for high-quality LED TVs to cost in the hundreds, sometimes even in the thousands depending on the screen size, they are typically offered at discounted prices during Black Friday. One of the most popular sales-items, LED televisions are sold by multiple retailers across the country including Best Buy, Walmart, Newegg, Meijer, Target, Kohl’s and more. If you’re not feeling up for lugging a LED TV home from the store, you can even order them directly from the companies’ online website. Regardless, if you’re looking to purchase a new TV or even upgrade from an old CRT display, now’s your chance to do so without emptying the contents of your entire wallet. To help you out with your television-shopping, we’ve compiled a list of some of the best LED TV deals that 2016 Black Friday has got to offer its shoppers.

Get endless entertainment with this Toshiba 49 inch Smart LED HDTV. Wi-Fi enabled, you can easily stream your favourite movie titles on its vivid, 210P Ultra High-Def display through popular apps such as Youtube and Netflixーit even comes with built-in Chromecast. Designed to be viewed from multiple angles, it also includes 3 HDMI inputs and 1 USB port for easy connection to other devices.

Enhance your television experience with this 4K Ultra HD Smart LED TV brought to you by LG. With multiple built-in apps, you can easily stream your favourite titles or even browse the web through Wi-Fi. Featuring a breathtaking 60 inch 4K display, you can play games or watch moves in 4x the resolution of full HDーmaking it a perfect addition to any home theatre. Supports Dolby surround for cinema-quality audio.

Boasting a stunning 1080P 55 inch screen, this Sharp Smart LED HDTV comes installed with the Roku smart platform, which allows you to access endless entertainment through Youtube, Hulu, Netflix or over 3000 other streaming channels. Featuring plasma-like contrasts, it is fitted with two speakers for a virtual surround sound experience. Includes 1 USB port and 3 HDMI inputs for easy connection to other devices.

The perfect size for a living room or bedroom, this LG 4K 1080P Smart LED HDTV delivers optimal performance in all lighting conditions. With its 40 inch HD display, you can view Blu-ray movies at the highest level of details in the comfort of your own home. Comes with a 60Hz refresh rate for smooth video even in fast-motion scenes. Includes 2 HDMI inputs and 1 USB port.

Featuring PurColor technology, this Samsung 55 inch 4K Smart LED HDTV delivers stunning graphics in life-like detail. With Smart View 2.0, you can easily bring your TV entertainment to your smartphone or vice versa. Complete with built-in Wi-Fi, streaming movies and music has never been easierーall the apps are there in one place for you to use. Includes 2 USB ports and 3 HDMI inputs.

Turn your living room into a home theatre with this Vizio 70 inch 4K Ultra HD LED TV. Loaded with thousands of popular apps such as Hulu and Netflix, streaming videos is both easy and convenient. With its 70 inch LED display screen, it offers nothing but vibrant contrast and superior picture performance. VIZIO Smart Cast app compatible, it also comes with built-in Chromecast. Includes 4 HDMI inputs and 1 USD input for easy connection to other smart devices.

Stream videos and movies on this LG 50 inch 4K Ultra HD Smart LED TV. Capable of delivering ultra 2160P high definition, you can watch your favourite TV shows at 4x the resolution of full HD. Perfect for entertainment of all sorts, it is also Wi-Fi enabled for easy streaming over the internet. For convenient connection to other devices, it comes with 1 USB port and 3 UHDMI inputs.

Affordable yer powerful, this Insignia LED 720P Smart TV comes built-in with the Roku Smart Platform for convenient access to unlimited entertainment. Fitted with two 8W speakers, it features a quick 8ms response time for minimal blurring even during fast-moving scenes. Boasting a 32 inch vivid color display, it is perfect for bedrooms or even dorm rooms. Comes complete with a remote and 3 HDMI inputs.

Considering their wide variety of LED TVs that will be on sale this Black Friday, it may be worth driving down to your local Best Buy to view the different models that they have available in person. As mentioned in the above list, they will also be putting out a handful of 4K Ultra High-Def LED TVs that are currently rising in popularity. With their amazing pricing, we can guarantee that quantities will not last long- so be sure to get there early to snag one for yourself! From what it says on their Black Friday flyer, Best Buy will also be offering free home delivery for all LED TVs greater than 51 inches in size, so that’s always an option should you not want to lug one home yourself.

With an advanced refresh rate of 120Hz, this 55 inch TCL LED Smart HDTV delivers stunning graphics in beautiful 1080P High-Definition. With dual-band wireless support and three HDMI inputs, you can easily connect your other devices for convenient video streaming. Designed to be modern and sleek, it comes with a built-in digital tuner so you can watch HDTV programs, where available. Wall-mountable.

Powered by a quad-core processor, this 50″ 4K Smart 2160P LED HDTV delivers your favourite content both quicker and easier. With High Dynamic Range, its 50 inch LED panel offers greater details and a fuller spectrum of vivid colours. Features UHD Dimming technology and a built-in digital tuner. With built-in Wi-Fi, you have access to millions of popular apps as well as the Smart Hub gateway.

Energy Star-qualified, this 1080P LED HDTV from Emerson boasts a stunning 50 inch LED panel with crystal clear, HD 1920 x 1080 resolution. With a 60Hz refresh rate, you’ll get nothing but flawlessly smooth video, even in fast-action scenes. Comes complete with an auto volume leveller, and a built-in digital tuner. Easily wall mountable, it is fitted with 3 HDMI inputs for easy streaming from other devices

Enhance your TV-viewing experience with this Element 1080P LED HDTV. Boasting a sizeable 50 inch LED display, it has a response time of 8.5ms and a refresh rate of 60hz for a smooth video performance. Fitted with built-in integrated stereo speakers, it offers a native HD resolution of 1920×1080. For added convenience in terms of connectivity, it comes with 3 separate HDMI inputs.

Packed with features, this Vizio Smart LED HDTV offers brilliant image quality for an affordable price. Featuring a 60 inch full array LED display, it is backlighted behind the entire screen for a greater performance. With built-in Wi-Fi and access to thousands of apps, streaming video or even music is a breeze. Energy star certified, the HDTV comes fitted with 2 HDMI inputs.

Featuring direct LED backlighting on its 60 inch display, this Samsung 4K 2160P LED HDTV offers bright and vivid graphics with minimal glare, thanks to its ultra-clear panel. With wireless connectivity, you can easily watch videos, play music or surf the internet with its built-in web browser. Reliable and fast, its built in V-chip also enables you to block content based on TV programming ratings.

If you’re looking for a reasonably sized LED TV for an affordable price, Walmart is the way to goーnot only  are they discounting some of the bigger brands such as Samsung and Vizio, but they’re also putting forth more cost-effective brands such as Element and Emerson. Their amazing deals will only be available on Thanksgiving Day, so mark your calendars if you don’t want to miss out!

Enjoy some quality entertainment on this 55 inch LG 4K ULED Smart TV. Boasting 4 times the resolution of full high-def, it displays movies and videos in jaw-dropping detail. With High Dynamic Range Pro technology, it offers some of the most vivid colours of the rainbow in crystal clarity. Features the easy-to-use webOS 3.0 platform for easy access to content such as Youtube and Netflix.

That’s it for our list of LED TV deals for this upcoming Black Fridayーif you’re in the market for a new television, hopefully one of the many above models caught your attention. Lugging a 50+ inch TV home can be understandably, be a bit of a hassle. Lucky for us many of the big-name retailers offer delivery servicesーin some instances, it’s even free! If you’re thinking of purchasing an LED TV online, it may be a good idea to take a look at the actual product in-stores firstーsometimes seeing the item in person is different from reading its description on a website. Nonetheless, LED TVs are definitely a hot product this Thanksgiving weekendーthey’ll definitely go quick, so you better hurry to the stores this upcoming holiday!