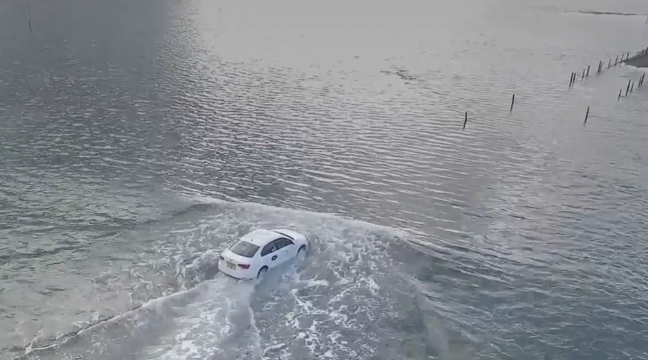 The Holy Island causeway is known for its rising tide and even though there are warning signs and crossing times, some drivers always try to beat the rising tide. One of the latest to race against the rising tide was an Uber driver.

The road is popular because of its rising tide, which covers it completely during some hours of the day. There are crossing times provided so drivers can know when it’s safe to cross. The driver thought it was a good idea to cross even though part of the road was already covered by the water.

This isn’t the first time that a driver tries to cross as the rising tide is covering the road with water. In the past, rescue teams have warned drivers that they are putting their lives at risk when attempting to cross during the rising tide. The road is covered by water two times a day and safe crossing times are displayed at both ends of the road.

The road has warning signs and safe crossing times but each year, a number of drivers try to race the rising tide. Many of them are caught by the water and have to stop to be rescued. The road also has refuge boxes, which were built so that stranded drivers can wait to be rescued. The car stopped right next to one of the refuge boxes as they waited.

It was not the greatest idea to try to race against the rising tide but rescue workers quickly showed up to help the passengers and driver.