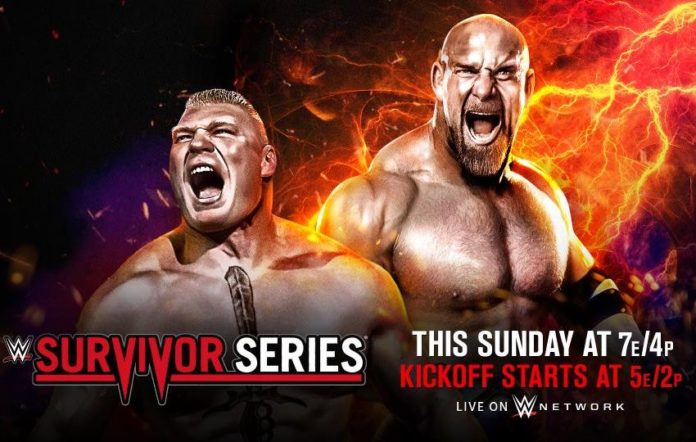 WWE Survivor Series is just one day away and fans can’t wait to see the return of Goldberg, who has returned to the company after 12 years. The event will also have a number of matches between WWE SmackDown and Raw. WWE Survivor Series will only have two title matches but championships and divisions could transfer with wins from the superstars competing in them. Here are all the matches for WWE Survivor Series:

Brian Kendrick recently won the WWE Cruiserweight Championship but the match at WWE Survivor Series will not only be for the title but also the division. WWE SmackDown chose Kalisto to compete against Kendrick. If the champion wins, the Cruiserweight division stays on WWE Raw but if Kalisto wins, all of the division will move to WWE SmackDown.

The Miz vs. Sami Zayn

Brock Lesnar and Goldberg will face each other for the second time. The first match happened 12 years ago and many didn’t think a second match would happen. The two superstars left the company after their match and Goldberg had not returned to the company since. A second match was confirmed after Paul Heyman issued a challenge on an episode of WWE Raw last month. On the following episode, Goldberg made his return to the WWE and accepted the challenge. The match was added to WWE Survivor Series a few days later.

Goldberg won the first match against Brock Lesnar 12 years ago, will he win again on Sunday or will Brock Lesnar get another big win?

Last month, Shane and Daniel Bryan challenged Raw to three elimination matches for WWE Survivor Series. WWE Raw accepted the challenge and the two brands began choosing and competing to be part of the matches. One of the three matches where WWE Raw and SmackDown will compete is the 10 vs. 10 tag team elimination match. Heath Slater and Rhyno were chosen as the captains for WWE SmackDown since they are the WWE SmackDown Tag Team Champions. The WWE Raw Tag Team Champions, The New Day, were also selected as captains.

For the match, Team SmackDown will have Heath Slater and Rhyno, Breezago, The Hype Bros, The Usos and American Alpha. Team Raw will have The New Day, Karl Anderson and Luke Gallows, Cesaro and Sheamus, The Shining Stars and Enzo Amore and Big Cass.

WWE Raw and SmackDown women’s division will also compete in one of the three elimination matches. The captain of the SmackDown team was decided in a match between Nikki Bella and Natalya. Nikki won the match and Natalya was later added as the team’s coach. Earlier this month, it was announced that WWE SmackDown Women’s Champion Becky Lynch, Alexa Bliss, Naomi and Carmella would also be part of the team.

For Team Raw, Charlotte was chosen as the captain. During the same episode, it was also announced that Bayley and Nia Jax would be part of the team. On the following episode, Sasha Banks and Alicia Fox were added to the team.

For the men’s elimination match, Team Raw has Kevin Owens and Chris Jericho as co-captains. It was also announced that WWE United States Champion Roman Reigns would be part of the team. The fourth spot on the team was given to the winner of the 12 man battle royal, Braun Strowman. It was announced on an episode of WWE Raw two weeks ago that Seth Rollins would also be part of the team.

WWE World Champion AJ Styles was chosen as captain for Team SmackDown. Randy Orton, Bray Wyatt, Dean Ambrose and Baron Corbin, who was later replaced by Shane, were also added to the team. James Ellsworth was also added as the team’s mascot.

WWE Survivor Series will take place on Sunday, November 20, and will start at 7 p.m.