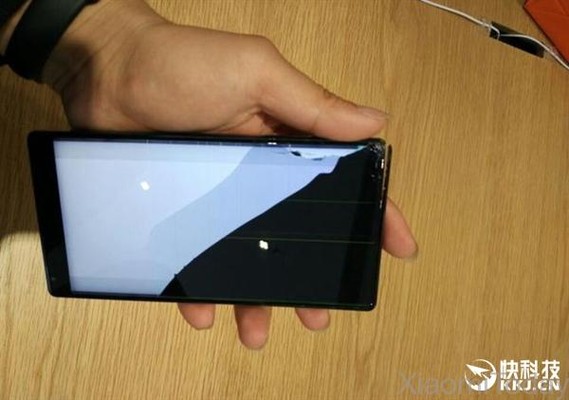 Last week, Xiaomi announced the impressive Mi Mix smartphone. The company has already released a number of phones this year but the Mi Mix easily stands out from the other because it has a 6.4-inch edgeless display with a 91.3 percent screen to body ratio.

The Xiaomi Mi Mix looks like a phone that could easily become a fan favorite in China and other countries where it is released. The official release date will be in two days but some have already been given the opportunity to try the new phone.

The Xiaomi Mi Mix looks great but the edgeless display also means that will be fragile. The borderless design means there is no space to save the screen from a drop. The phone is not on sale yet but someone appears to have dropped the phone in one of the stores. The accidental drop did not show good results.

That’s not very good news for one of the first phones to have an edgeless display. Most smartphones are already fragile without the edgeless displays, so those thinking about buying the Xiaomi Mi Mix will have to be very careful. The two versions of the phone will come with a case, so users will have something to protect their Xiaomi Mi Mix.

The edgeless display is one of the most impressive parts of the phone but the specs are good too. The phone has a Snapdragon 821 processor and 4GB or 6GB of RAM. The camera is 16 MP and the first version offers 128GB of storage. The phone has a 4,400mAh battery.