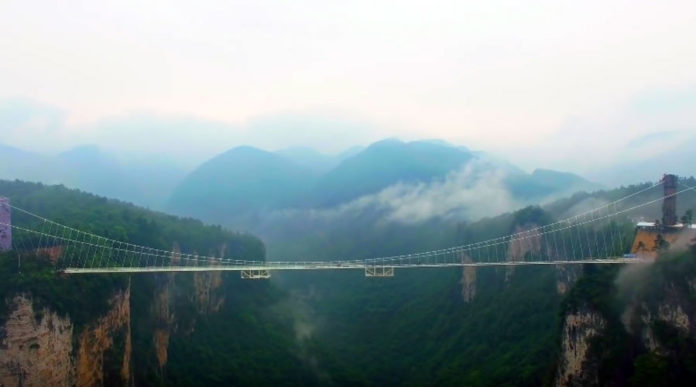 China recently opened a glass bridge that was visited by thousands of people in its first week. The bridge, which has a floor completely made of a very strong glass, connects one side of the mountain to another and holds a number of world records.

The glass bridge has caught the attention of everyone but China is already planning to build an even more impressive bridge. The new bridge will be built in a way to make it appear as if it wasn’t there. The glass bridge is already an impressive structure but this one could also be visited by thousands when it is completed in the future.

The designer of the new bridge plans to cover it with reflective stainless steel, making it seem like there was no bridge connecting the mountains.

The bridge will take some time to be completed as the plans were just revealed but visitors currently have the Zhangjiajie Grand Canyon Glass Bridge, which holds the record for the highest and longest bridge in the world. The bridge opened in August but there were so many visitors during the first two weeks that it was closed for an urgent upgrade.

The glass bridge, which connects two mountains, has a glass floor and is 1,400 ft long and 984 ft high. China has a few other scary bridges but the Zhangjiajie Grand Canyon Glass Bridge is easily one of the scariest as it allows visitors to see how high they’re walking with its glass floor.

The Zhangjiajie Grand Canyon Glass Bridge is a very safe bridge, despite having a glass floor. Before it was opened to visitors, park officials invited the media and a few other people to test the bridge. The floor is completely made of glass and park officials wanted to prove its strength, so they gave reporters and everyone there a sledgehammer to hit the glass. The sledgehammers left some marks on the glass floor but no parts broke.

The strength of the glass was proven again when an SUV was driven over the glass floor. The Zhangjiajie Grand Canyon Glass Bridge is an impressive structure but it looks like China has plans for another unique bridge.

The new bridge will reportedly be built in Zhangjiajie in Hunan province, the same city where the Zhangjiajie Grand Canyon Glass Bridge is located. Thousands have visited the new glass bridge, so the transparent bridge will probably be a huge success for the city once it’s completed.