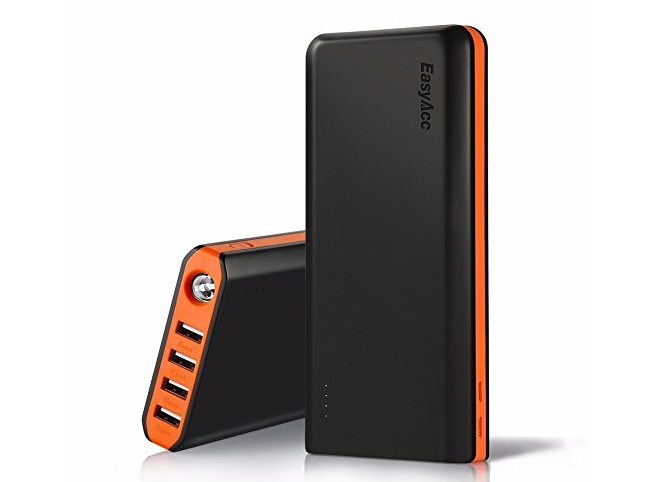 One of the most common issues among people living in this digital era? Keeping devices charged. I would hazard a guess that most people own something that needs to be charged in some way. Whether it’s a gaming controller, a smartphone, a laptop, or a tablet, there comes a time when it needs to be plugged into the wall to replenish its energy. Unfortunately, not all of us lead lives that allow us to have regular access to a power outlet. Maybe you’re someone who travels a lot, or maybe you’re looking to keep your devices charged during a camping trip or something similar. A few years ago, you would have been out of luck, unless you were looking to lug around an enormous battery. Luckily, technological advancements have yet again caught up to help us take care of this inconvenience.

In recent years, portable power banks have seen a massive increase in popularity. I remember back when the popular Pokemon Go app was released, increased smartphone use meant that a lot of people were running to their local tech store to pick up a portable charger. If you’re in the market for a new power bank, you may run across the EasyAcc Monster 20000mAh Power Bank during your research. In this article, I’ll be breaking down the functionality and hardware behind this popular power bank. I’ll tell you all that there is to know about the battery, while also being sure to let you know whether or not I think the battery is worth your time and money. Let’s get a closer look at this nifty gadget. 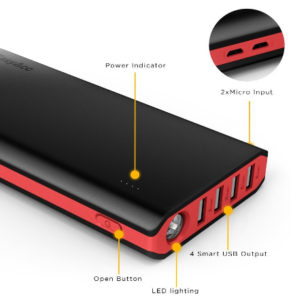 What I like about power banks is that they aren’t all that complicated. If you take this power bank as an example, there isn’t much to it. This bank uses a high capacity 20000 mAh battery, which means that it’s capable of using up a lot of charge. EasyAcc advertises that this capacity should allow for the battery to fully charge an iPhone 7 six times before it needs to be refilled. That’s a pretty substantial amount of energy, and it’s even more impressive when you consider the fact that this battery isn’t all that large. The input ports for this battery also ensure that, when you are going to charge the bank itself, it won’t take too long. A full recharge is said to take about 6 hours. This may seem like a long time, but it’s actually a lot faster than batteries of this size typically take. 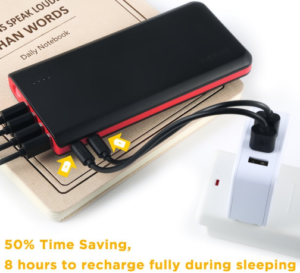 The 4 USB ports for this power bank are nice, too. Most inexpensive power banks are capable of charging one, maybe two devices at the same time. The four ports on this bank make it to where it could plausibly be shared by an entire family. Going on a road trip? Don’t bother buying everyone their own portable charger. Just plug all of your devices into this handy bank. Another issue that people will often encounter when charging multiple devices at once is safety. It isn’t always safe to plug multiple devices into one power source. However, EasyAcc built this bank with that exact issue in mind. Safety features will help to protect your power bank and your devices from overcharge, over current, and short circuiting-related technical issues. With the EasyAcc Monster Power Bank, all you really have to do is plug in your devices, hit the power button, and let it do its job. You have no reason to worry about anything else.

How well does it actually work?

Of course, when you’re dealing with a device that is going to be interacting with something as valuable as your smartphone, you want to make sure that it actually works. The last thing that you want is to plug your smartphone into a power bank, turn the bank on, and have your precious smartphone catch on fire or something crazy like that. So, does the EasyAcc Monster Power Bank actually do what it’s supposed to do? You might be happy to know that, yes, it actually does do precisely what is advertised. This power bank has been praised for its sleek design and high build quality. Unlike a power bank that you may pick up at a convenient store, this one is hardy and strong. It’s the kind of gadget that you can buy and reasonably expect to keep for a very long time. 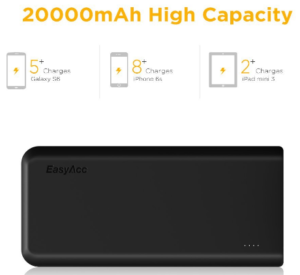 The Monster Power Bank is also designed in a very intelligent way. Many features exist to ensure that the user experience is as convenient and simple as possible. For instance, a light indicator along the body of the battery can tell you how much charge is remaining. Many inexpensive power banks do not have this feature, which makes for a lot of guess work on the consumer’s part. Another convenient feature with this bank is the flashlight along the bottom, which can be enabled with two clicks of the power button. Basically, this makes it to where you can easily connect your devices to the power bank if you’re ever in a dark place. Again, this makes this portable charger especially well-suited for those who travel a lot. This particular application also makes it useful in emergency situations. If your power goes out, you can still charge your devices.

At $35, the EasyAcc Monster Power Bank is a bit more expensive than most portable chargers. Like I’ve said before, you can easily pick up a portable charger from your local big box retailer or convenience store for less than $20. However, those chargers aren’t nearly as high-quality as this one. To begin with, they’re typically only able to charge 1-2 devices at a time. If you ever see yourself needing to charge more than that, then this 4 USB power bank may prove to be useful. Not only that, but more inexpensive power banks, due to their small size, don’t have a capacity nearly as large as this one. The whole point of a portable charger is that it allows you to charge things without having to use a power outlet. What’s the point of buying a portable charger if its capacity is so low that you need to recharge it every couple of hours? 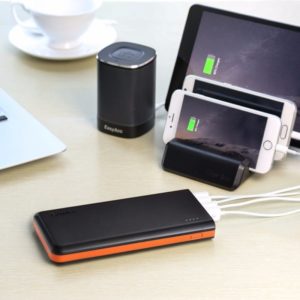 When it comes down it, in terms of functionality, build quality, and effectiveness, you can’t get much better than this EasyAcc charger at this price point. So, if you’re scrambling to pick up a new power bank for whatever reason, I highly advise that you check this one out. Although its features make it very well-suited for people looking to charge their devices in more “extreme” settings, it’s still easy enough to use that I think that just about anyone could get something out of it. I would say that more than half of the portable chargers that you can buy out there just aren’t worth what you’re paying, so this power bank is really one that you would be ridiculous to pass up.