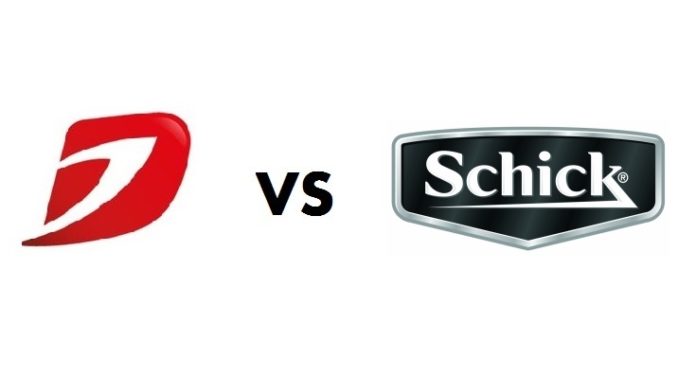 I think this might be my final head to head razor review. I am sad to say goodbye to the series, but I at least know I have a whole slew of Lucky Tiger brand stuff to test out in the coming weeks. In the mean time I’ll be pitting the Schick Hydro 5 Sensitive, one of the flagship Hydro 5 models, against the Dorco Pace 7. The Seven bladed behemoth straight outta Korea. It took me a fair while to get my hands on the Pace 7, and at this stage of the game it feels almost unfair to compare it to an older fie bladed design, but neither Schick nor their partners in near global monopoly Gillette offer a blade any more comparable. So I’m stuck.

Schick, based in the United States, began in the early 1900s, then and now operating under the name Schick., but the European wing of the firm have been operating under the name Wilkinson’s Sword for nearly 300 years. Always an impressive claim. The US firm is responsible for many innovations, and their early double bladed razor propelled then company.

Dorco is a newer company first started in the 1950’s in Korea. The firm has made a name for itself world wide with their low cost, a firm that is challenging the current status quo, and price setting the juggernauts Schick and Gillette have forced on the market. Their most recent offering, the Pace 7, is one of the most advanced razors on the market.

The core business model between the two firms is very similar. An old school approach, with both selling a variety of blades and handles, different from the currently quite popular subscription model. I am a fan of both models, but the main difference between them tends to be the price. Subscription services are usually much cheaper, and while that is true if you compare them to Schick, it is not the case when compared to Dorco.

Now to the shaving style. I have been honing this style for a while, and have become quite comfortable doing it. It is a five step three pass shave on day one, followed by the same shave a few days later with the now dull blade.

This is not my first Hydro blade, I previously compared the Hydro 5 vanilla to the Pace 6 Plus, and it was at a disadvantage even then. I feel like that disadvantage has been multiplied a little now. Due to the shaving style that I espouse, the more blades the smoother the shave. I know for certain that a simple one pass shave works wonderfully with the Hydro 5.

I have to start by saying how much I like the Hydro 5 handle. It has a goo amount of heft to it. If you have read my previous reviews you know that i like a good bit of weight to my razor, I feel it aids in the smooth single strokes that i go for. The ridges on the Hydro 5 are fantastic. The gel reservoir makes the first pass so easy, if you have tried shaving with longer hair you’ll know what I mean about the early tug. It just doesn’t happen here. The sensitive variant seems to have a slightly more cooling effect, likely menthol, and this was a stroke of genius. I cannot go into specifics about the make up of the lubricating gel, as they do not release that information.

Onto the shave, and I must say, it was fantastic. There are few blades out there that can provide this kind of shave, the gel reservoir makes up for the relatively rudimentary nature of the blades themselves. It allows a five bladed design to deliver an experience on par with a six, or even a seven. The second and third passes went by fairly easily too, though that final pass did lead to some irritation, having to go over areas a forth and fifth time to remove the hair.

Hydro 5 is one of my favorite trimmers on the market. I am not sure what they did, but it just works. I have used a fair few, even a few from the Dorco stable, and none have allowed me to remove all of the hair beneath my nose. The Hydro 5 is one of the best out there and the sensitive version would be my go to blade if it weren’t for the existence of the Pace 7.

The Pace 7 handle is not quite as weighty as the Hydro 5, and to me that is a minor black mark. I said before that i like heft to what I’m holding, and I didn’t get it from the handle here. ergonomically speaking it was lovely, all smooth curves that fit into the hand well, the ridge grips were in all the right places too, and even with a loose grip I felt in control of the blade. The lubricating strip is joined by a honeycomb guard at the bottom, which makes it a little easier to shave against the grain. The strip contains Argan oil and Calendula extract, the former for smoothness and the latter for its anti inflammatory properties. A cool combination.

Now to the shave itself, It was amazing. From first stroke to last it was sublime, my go to word for the Dorco shaving experience. That first pass would have done me, well nearly. I call this the closest one pass shave on the market, and if you are looking for a razor that can leave you photo ready in under ten minutes, then this is the one to go for. For those of us who want to finish our shave, the second and third passes were great too. The third in particular stood out, that honeycomb mesh guard made it all the easier to glide, single strokes against the grain. I found that afterwards there was exactly no irritation, and try as I might, most other blades always leave me with something a little red.

One last thing, the Pace 7 does not have a trimmer blade. I have it on good authority that this is due to the weight of the seven bladed design, in addition to the precision required when building the things. It is a thinner cartridge than is liked, no bad thing as it allowed it to reach those areas that I would use a trimmer blade on anyway, but it is still a mark against it, and one for the Hydro.

Now to the dull blade for each of them. I ave found that the more blades a build has the better the latter day shave, and usually that is the case, but I had a fair few problems with the Hydro 5. That gel reservoir was not built to last, and shaving a few days later was a chore. it still got the job done, but the magic that I felt the first time I used it had vanished.

The same could not be said for the Dorco. the Pace 7 was, in a few ways, better a few days later. one of the issues I had with the Pace 7 was the care I had to take when shaving, this is seven very sharp blades after ll, but I found with the slightly blunter blades I could let loose a little and sprint though the shave. With my three passes the end result tends to be the same regardless, so I was left laughing.

Overall, the Pace 7 has this section. The Hydro 5 suffers from a failing gimmick on the third day of use, while the Pace 7 gets by with more blades.

This is one of the most important differentiating factors. You could provide the best product in the world, but if the price is wrong, then no one will buy it. The Schick Hydro 5 sensitive will cost you close to $28 for the handle and ten refills. A fairly high price for what I would wager is a mere 20 shaves, give or take. The Pace 7 is a little cheaper, with the same costing you $19. The pricing of the big name brand razors, think Gillette and Schick, are based on market share. They account for the vast majority o razor sales in the US, and sue to that have been able to slowly raise the price, leading to very wide profit margins. The younger upstarts, don’t have to cost a premium, so it will be interesting to see how Gillette and Schick will respond.

Where some firms have expanded their line to include balms, ointments, exfoliants and all the other shaving accoutrements that I simply adore. I would like to see the brand expanded, let the Dorco experience encompass all aspects of your shave. As it stands it is a moot point between them.

Well it doesn’t take a genius to see which of these is the better product. But does that translate into sales? Probably not. Too many folks are brand loyal these days, even in the face of faceless corporations jacking up prices exponentially. I understand that the value of a product is whatever someone is willing to pay, but I feel we have reached the point where we have to stop being willing to pay a premium for products that simply aren’t worth the price. The Hydro 5 Sensitive, and its siblings, are fine razors made unfine by an unfair price. The Pace 7 is priced well, and may well provide you with the best shaving experience of your life.