Jeremy Scheinberg and Chris Harden were both fathers who were looking for a fun way to teach their children about STEM topics. STEM stands for science, technology, engineering, and math. They developed an adorable plush robot called TROBO, which reads children fun stories about the STEM topics from a speaker in it’s tummy. The toy has a bluetooth connection which allows it to connect to smart phones and tablets. TROBO was funded on Kickstarter in 2014, but would they get an investment from the Sharks? Let’s take a look. 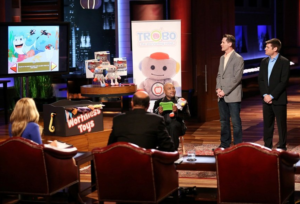 Chris Harden and Jeremy Scheinberg walked out into the Shark Tank and onto the stage in their suit jackets and button up shirts. They introduced themselves, and told the Sharks that they were seeking $100,000 in exchange for a 10% equity stake in their company, TROBO. Jeremy described TROBO as a storytelling robot from Florida. He asked the Sharks how many times they’ve seen a stuffed toy that just repeats the same phrases repetitively until the child gets tired of it, and the toy sits at the bottom of their toy chest. The camera cut to an overflowing toy box with “worthless toys” on the front of it.

Chris said that they had the solution to this dilemma, and brought out an adorable stuffed robot, along with a tablet. He described the stuffed robot as a TROBO, and said that TROBOs were wirelessly connected toys that were able to read kids stories about math and science. They could be connected to either tablets or smartphones. Chris continued, stating that children could read along on the devices, and interact with the app in the form of pictures and puzzles. Jeremy followed up by saying that the stories could be personalized. The child could name the character after themselves if they wanted to, and they were also able to create an avatar based on themselves, kind of like a video game.

Chris singled out Daymond, and told him that it was time to meet his new robot best friend. Daymond walked up to the stage as Chris handed him the robot, and told him that he’d be listening to the story “What do Sharks eat?” The title and an avatar of Daymond was featured on the big screen television on the stage. Lori and Robert both “awwwwwed” at the cuteness of it. Chris has Daymond sit on a child’s stool, and Mark told him “Good luck getting out of that seat!” In a sarcastic manner. Chris handed him the tablet, and tucked the stuffed robot into his arm.

Chris told Daymond to hit the right arrow on the tablet to begin the story. The story started in a robotic way, saying that some sharks will eat anything, and prompted Daymond to help the shark ease her tummy ache by dragging the food items from her “tummy” to the garbage can. Daymond did as he was told, yawning as he did so. Daymond asked if he could keep a wine glass as he hovered it over the Sharks mouth, but Chris told him that it needed to go into the garbage as well if he wanted to complete the puzzle. Daymond told the shark to take a little sip before he moved the glass to the trash bin.

Chris thanked Daymond, and took the tablet and the robot. Daymond walked back to his real seat as Chris said that TROBO would stick around year after year while helping parents teach science at an early age. Jeremy and Chris ended their presentation by telling the Sharks to get ready for TROBO in unison. Chris began handing out personalized TROBOs which featured an embroidered tag with each Sharks name on it. Lori said that her’s was very cute. Robert looked over his TROBO, and asked if he could control the tablet from the stuffed robot, or if it was simply where the sound came out. Chris told him that the sound came from the robot, but that was it.

Robert wanted to clarify that the only purpose that TROBO served was sound, aside from the regular stuffed toy responsibilities. Jeremy said that there was a more emotional connection between the TROBO and the child, in addition to the robot being a speaker. Robert asked who created the content, and Jeremy told him that they crowdsourced the stories and the pictures. Jeremy said that they pitch a story topic, and hold a contest for people to submit their stories and the winners get paid.

Kevin followed up by asking how much it cost for the TROBO. Jeremy told him that the TROBO retails at $59.95 for the plush robot and the first 5 stories. Kevin groaned a little bit. Daymond asked the two what their sales were, and Chris deflected a little bit, saying that they had buyers who placed orders, and they were “in talks” with reps from med-box retail stores. Daymond wasn’t having it, and asked them more firmly what orders have been placed. Jeremy told him that they’ve gotten orders from small boutique stores. Daymond asked what the total was, and Chris told him 600 units. Daymond asked how many trade shows they attempted, and the pair told him two shows.

Lori asked if any stores showed great interest, and Chris tried to brush the question off by saying that they did not expect an overwhelming response because they were courting smaller stores. Daymond told the entrepreneurs behind TROBO that there were already a lot of storytelling apps and smart toys out there. He asked Chris and Jeremy what made them different from everyone else. Chris told him that they have been featured in 45 different publications, and magazines. Daymond pointed out that they’d gotten that level of coverage, but the orders did not reflect the same level of interest.

Chris said that the stores were risk-adverse. He told Daymond that they’d been in the industry for a year and a half. The makers behind TROBO had many skills in the manufacturing field, but selling was new to them, and that’s why they were looking for a Shark. Robert asked if there was a subscription fee per month to get more stories, and Chris told them that it cost $4.95 per story, and then would switch to a subscription model. Robert told him that if they were able to generate more interest, they might be able to become a platform for publishers trying to sell to the kids.

Mark told them that he was not a fan of the idea. Mark said that he did not think the content was compelling enough, and he went out. Kevin told them that they would not get anywhere trying to sell a $60 stuffed toy with a speaker in it. He continued ripping their price structure apart, letting them know that the content for TROBO was not feasible at $5 each story. There is already tons of free content for children available online. Kevin said that he has experience in the toy space, and in order to get a big volume of orders, they need to go after Target and Walmart instead of the smaller stores. Kevin insisted that the larger stores would refuse to put the toy on the shelves, even for $50, which was $10 less than their current suggested price. Kevin went out.

Chris sounded upset as he asked Kevin if he’d ever heard of Teddy Ruxpin, which sold for $70 back in 1985. Apparently Teddy Ruxpin sold $95 million, which is impressive for the eighties. Kevin pointed out that Teddy’s mouth moved. Daymond said that it was a time when technology was not up to the standards of 2015. Daymond said that he thought TROBO would hit a dead end, and he went out. Chris thanked him.

Lori was up next, and told them that she also thought that the price point would be a challenge to them selling to large retailers. Lori pointed out that TROBO went to a toy fair, and did not have any large toy retailers jumping on board. She said that large toy stores dont hold back on purchasing something new and exciting. Lori said that she took that as warning to her as an investor, and she went out.

Chris addressed Robert, who was the last remaining Shark. He pointed out that they had not discussed patents yet, which the Sharks look for in their teams. Chris started going through his sad life story, which involved him as child whose mother was on welfare, and his father went to prison. Chris claimed that he learned an important lesson from his mother, who taught him that he should commit to his education every day, and that would allow him to get out of his situation. Chris began to tear up, and explained that he got out of that situation because of education, and the opportunities that afforded him. He said that he could offer the Sharks two people who could execute like no one else, and “a dude who has a FIRE in his belly like they’ve NEVER seen!” He asked Robert to think about that, and requested that all of the other Sharks to reconsider.

Daymond smirked, but Robert thanked Chris for his passion. He said that he could identify with him, as he too came from hard times. He came from a family who hadn’t gone past high school, and he chose to drop out of university. His father confronted him about that, and told him that he loved him, but would murder Robert if he did not go back to school. This explained Robert’s commitment to education. Chris begged him to work with them. Robert said that he was not impressed with the toy, but could see it working as a content delivery business. He said that he has a connection with Dreamworks, and they may be interested in providing great content, and selling plush toys. He made them an offer of $100,000 for ⅓ of the business, which was contingent on getting the deal with Dreamworks.

Kevin asked why Dreamworks would need them, and Robert said that they already have the technology and the store in place. Robert said that it was a way to deliver content. Chris said that they appreciated the offer, but the makers behind TROBO were having trouble with the valuation. Chris asked if Robert would be willing to go to $166,000, which would be a valuation of $500,000. Robert took a moment to consider, and he agreed. Chris hugged hm, and welcomed Robert to Team TROBO. Robert and Kevin talked back and forth with the stuffed robots as Jeremy and Chris walked off the stage. Kevin told Robert “TROBO thinks you’re screwed!” In a high falsetto. Let’s see if he’s right.

TROBO Now in 2018 – The After Shark Tank Update 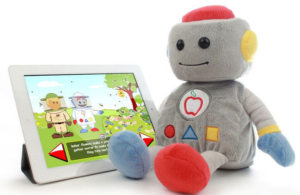 Now in 2018, TROBO has been featured in mass media such as People Magazine, TechCrunch, Fox, CBS, Examiner, and Philly.com. They were also declared the winner of the Best of Toy Fair 2015 by Popular Science magazine.