Phil Dumas started out with an unusual interest. He was obsessed with the mechanics behind locking mechanisms, and how to improve on a technology that was more than a millennium old. He started his company Unikey Technologies and integrated a standard house lock with smartphone technology. Let’s take a look, and see if the Sharks would see the value in this kind of technology. 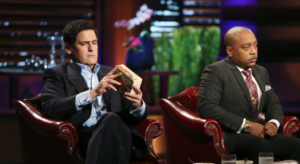 Phil Dumas walked out onto the Shark Tank and into the stage. He introduced himself and said that his company was Unikey Technologies. He asked the Sharks for a $500,000 investment in exchange for a 33% investment stake in the company. Phil said that his passion was access control, which he acknowledged sounded weird. He said that the interesting thing about the market is that the key hasn’t changed over the last 1100 years. He wanted to revolutionize the key by incorporating it into the mobile phone. Phil said that you could take your bulky keychain and get rid of it. He tossed an example key ring over his shoulder.

Phil did the demonstration. He said that as long as he was in the range of the lock, he was able to control it. Phil handed his phone to Mark, who was out of the range of the door. He walked back over to the door and showed the Sharks that while he was able to lock it with the button, he was not able to unlock it since the phone was not in range. Phil showed them that once he walked back into range, he was able to open the door again. He said that the other unique thing about Unikey is that by having the key on the phone, you would be able to send and receive keys both on an extended used, or a one-time basis. If you have a friend coming to town, you can text them a unique key. If you have a maid service on a particular day of the week, there he would be able to work for just the period the maid was supposed to come over. A permanent key could be sent to your kids or your spouse. You’re able to control the keys and delete them at any time.
Robert said that he did an excellent job with this presentation, and asked Phil if the Unikey Technologies could be retrofitted to an existing lock or if the user would have to get brand new keys locks and doors. Phil told him that the key was two bolts in and two bolts out on a new lock. Phil said that the user would have to buy a new lock. He continued, stating that he was working with Black & Decker at the moment. Kevin asked if he could use the original key on the lock if he wanted to. Phil said that you could., so if your phone dies, or you don’t have it with you, you would be able to use a standard key. Damon wanted to know if Unikey Technologies was patented. Phil said that they had an all-inclusive Provisional Patent filed. He stated that part of the investment was to take that to a nonprovisional status.

Kevin asked if Phil’s strategy was to license the technology to a larger producer that already makes locks. Phil said that it was. He stated that he is working with Black & Decker on a licensing structure that would include his technology with their locks as well as their marketing. Kevin has what the next step with Black & Decker was. Phil said that he was planning on dropping everything off to Black & Decker tomorrow, and they were going to presented at the closed-door executive meeting the next week. Barbara asked him what he was planning on selling it for. Phil said that he was planning on getting it to market at $149 to $199. He said the ultimately; it was up to Black & Decker what they charge for it. Kevin wanted to know what the price difference was between Unikey Technologies and a regular locked. She let him know that it was about $30. Kevin said that the difference between the two was $100, which was pretty staggering. Kevin wants to know if he should be worried about the price difference since the economy was still bad.

She let him know that he had nothing to worry about. He insisted that people were still buying Technologies. Robert said that he was very interested. He wants to know why I feel then just go to Black & Decker to raise the money from them in exchange for a one-year exclusive in the market. Phil said that Black & Decker does not pay for development. He continued, stating that they were willing to pay a royalty agreement. Phil said that they also had the option to take it to Market themselves, and make a lot of money on the internet.

Mark asked for what the soon to be royalty would be if he made a deal with Black & Decker. Phil said that he would want to go for about seven and a half percent of gross sales. Kevin said that based on his investment ask, Phil was saying that the business was worth one point five million dollars. He wanted to know where Phil came up with that value. Phil said that even when it was pre-revenue, a million dollars was very reasonable for a tech company with technology like Unikey Technologies. Kevin asked how much more money he was going to need to get the first Unikey Technologies sold. She said that he was going to need 1.1 million dollars to hit profitability. Phil stated that he was planning on doing two rounds of investment. Robert said that it wouldn’t get him to profitability, he would just get him to the end of proof-of-concept.

Phil stated that the first $500,000 would be used for the patent protection. The next thing he would need would be engineering, and equipment. He said that the absolute minimum to take it to the next level would be the $500,000 investment. Daymond points out the $500,000 was a lot of money. Robert asked Phil to agree that the entire concept of Unikey Technologies is hanging on the deal with Black & Decker. Phil said that the deal with Black & Decker was just one channel, but he wasn’t putting all his eggs in one basket. Robert asked if the only risk that he would be taking would be putting the money in, growing the technology, and making sure it worked. Phil said that he would make sure that Robert got his money back if he had to sell all of it himself. Mark left at that.

Barbara wants to know how he was going to assure them that they would get a return on investment. Phil said that he came from the private equity field. He had a degree in mechanical engineering. Kevin stated that he was in great pain right now because he liked Phil, and how he told the story about making it happen. His concern was that the housing market was a total disaster. Phil’s product cost three times as much as the current solution that goes in every door today. They’ve gotten a lot of development risk, and they don’t get the marketing a Black & Decker passes. Phil said that they weren’t directly linked to the new Home Market since people buy aftermarket products for home automation.

Kevin said that there are a bunch of different deals and life. He stated that Unikey Technologies was one where he loves the story, but was feeling the risk. Kevin put $100,000 down and wanted 50% of the company. Robert said that he liked the fact that Phil loves something is boring as locks. Robert stated that he’d give Phil 1 million dollars in exchange for 75% of the company that deal was contingent on getting Black & Decker in with the deal. Phil would only get 25% of the enterprise. Robert said that he needed Black & Decker as a proof-of-concept. He needed them to prove the market.

Barbara made an offer because she said that she would get annoyed now every time that she had to pull out her keys. She said that she would give him $250,000 exchange for 25% of the business and only if he could get Mark Cuban in for the other 25%. Daymond told him that he had an excellent presentation. Daymond had some exit wounds from other deals that he’s done. Daymond offered him the full $500,000 in exchange for 40%. Mark prefaced the deal that he was making on the understanding that he knew that once he made his offer, so would have to raise another $600,000. Mark said that he loves Barbara, but didn’t think that Unikey Technologies was her wheelhouse. He said that Kevin strength is beating people up over the numbers. Mark stated that he was willing to take up Kevin’s contribution of the $100,000 and provide the other $400,000. Mark asked for 45% equity.

Phil told Mark that he came in wanting to do a deal with him. He countered with 40% equity. Mark looked over at Kevin. Mark said that he would split the difference at 42%. Robert asked Phil to consider his deal again. He was eliminating the need for another round of Investments. Robert said that it was more cash, and twice the money he was asking for. Mark stated that Phil should know from his background and experience in that it’s not just about the equity number is, they also the assistance that the Sharks would be providing. Phill said that he understood, and they would have a deal at 40%. Mark wants to know how he was going to be protected in the next round of investments. Jill said that they would get two seats on the board of directors. Kevin asked if he already had other people on the board of directors, but still told him that he was the only one. The Sharks would have control of the board, and he would have control of the stock. He said it would be a balance of power. Kevin and Mark agreed, and they had a deal. Robert looked upset and stated that it was a bad deal. Let’s see if he was right.

Unikey Technologies Now in 2018 – The After Shark Tank Update 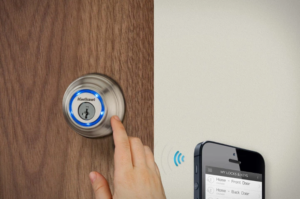 Unikey Technologies has expanded since their initial appearance on Shark Tank, and they appear to have kept pace with the technology as it has improved through the years. Unikey Technologies now has many partnerships with large corporations such as Kwikset, Nest, Honeywell, Haven, and Weiser. Some of their current products include the Kevo and the Kevo Plus, which are smart locks that allow you to lock and unlock your house from your phone. The Kevo Plus even lets you unlock your door remotely, without having to be in the vicinity. There are new products on the way such as the TouchKey and a Commercial Reader for storefronts.