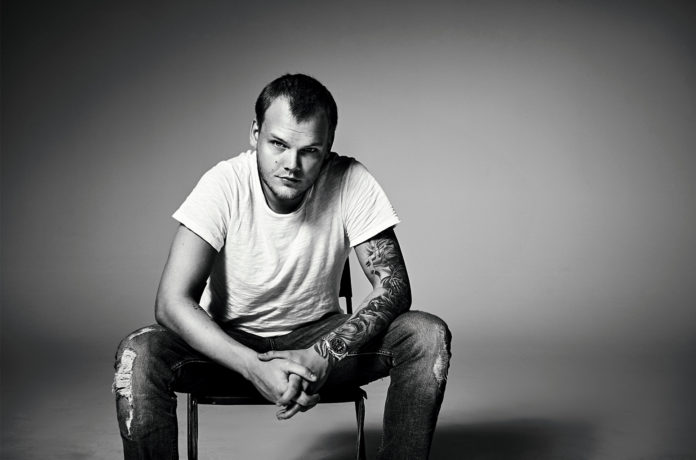 In less than a decade, Avicii has managed to become one of the most promising producers in all of the music industry. Although his music hasn’t been in the mainstream for very long, he has still been able to acquire a level of recognition and fame that a lot of people would only dream of. Avicii, also known by his birth name of Tim Bergling, was born in Stockholm, Sweden on September 8, 1989. He has released a variety of hit songs over the years that have absolutely propelled him into stardom. Tim has millions of fans around the world, and he regularly engages with them through his various social media accounts. 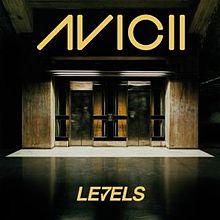 Tim got his start in the music industry at a relatively young age in 2007, when he signed with the Dejfitts Plays record label. A couple of years after that signing, in 2010, he released the song “Seek Bromance”. Although the song didn’t get much airplay over here in the United States, it became a big hit over in countries like France, Sweden, the United Kingdom, and Belgium. Bergling carried the success of this track into 2011, when he released the single “Levels”. This song saw an even greater degree of international success, topping charts in Austria, the United States, Norway, Denmark, Germany, Ireland, and many other countries. Avicii received some critical acclaim, too, when he worked with David Guetta to produce the track “Sunshine”, which would go on to be nominated fro a Grammy Award for Best Dance Recording.

Another one of Tim’s big releases during this time period was “Silhouettes”, which released in early April of 2012 and featured the vocal talents of Salem Al Fakir. “Silhouettes” performed well in countries like Finland, the United Kingdom, the United States, Sweden, and Belgium. Later that same year, Bergling released “I Could Be the One” with Nicky Romero. Like many of his previous songs, this one became an international hit, charting extraordinarily well across the globe. Around this time, he was also nominated for a Grammy Award for Best Dance Recording for the song “Levels”. Although he wouldn’t actually win the award, the damage was done, so to speak. Avicii was rapidly becoming one of the most popular producers and DJ’s of our time.

In the years to follow, Tim Bergling would release several different tracks and collaborate with many different big names. In June of 2013, he released the single “Wake Me Up”, which was meant to be the lead single off of his debut album. This would become one of his most popular songs to date, with critics and casual listeners enjoying the track’s cheerful and experimental sound. “Wake Me Up” would go on to top charts in over 20 different countries. A few months later, he released the single “Hey Brother”, which was also a massively successful track. (The commercially successful release of “Hey Brother” made it to where Avicii had four different songs top the UK Dance Chart within a single year.) In October of 2015, Avicii released his second studio album entitled Stories. 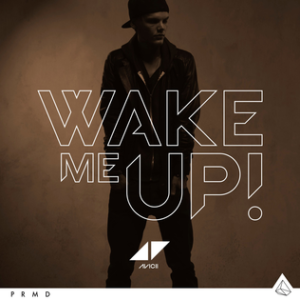 Due to his increasing popularity, Stories was able to feature greater talent than some of his earlier releases. Stories featured artists like the Zac Brown Band, Brandon Flowers, Matisyahu, Robbie Williams, and Salem Al Fakir. The album was very well-received, and Bergling saw his fan base continue to grow. He announced that he had begun work on his next album in early 2016, and he is currently slated to release it some time this year, in 2017. Avicii is set to release this album with Universal Music Sweden, who he signed with very recently. Although he started out small a few years ago, today, Tim Bergling has worked with several major musical artists since then. Most notably, he helped Coldplay produce a track off of A Head Full of Dreams, their seventh studio album. Without a doubt, he is one of the more promising producers in the industry right now. 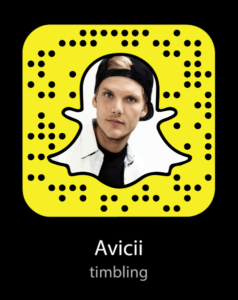 If you want to add Avicii on Snapchat, then you can just use the app to scan the snapcode above. If you don’t want to do that, then you can search him by his Snapchat username or click the link right here.

If you’re interested in checking out Avicii’s personal, official Facebook page, then you can look him up under the username @avicii. You can also check his page out by clicking here.

Avicii has nearly 2 million followers on Twitter. If you aren’t one of those 2 million people, then keep in mind that you can follow him by simply searching for him under the username @Avicii. Take a look at what he shares with his followers by clicking the link here.

If you want chat with Avicii on Kik, you’re out of luck. Unfortunately, the music producer has yet to release any details regarding his Kik account to the public. If you’re chatting with someone who claims to be him, then you’re probably being tricked.