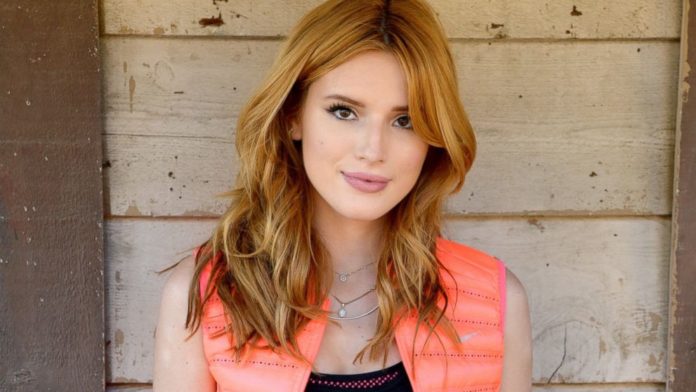 She’s only 19 years old, but Bella Thorne is already one of the more popular young stars in entertainment today. Following high profile television roles in shows like Big Love and Shake It Up, she has been able to take her career to astounding heights. Bella was born in Pembroke Pines, Florida on October 8th, 1997. She has amassed a strong and loyal fanbase, who praise her work in television, film, and music.

Growing up, Bella was inclined to take an interest in entertainment at a very young age. Both of her parents were actors, and so in just 2003 she was able to make her first screen appearance, as more or less an extra in the movie Stuck on You. Thorne wouldn’t acquire her first major television role until 2007, when she was brought on as a recurring cast member in the show Dirty Sexy Money. Just one year later, she acquired a large role in the series My Own Worst Enemy. My Own Worst Enemy didn’t last for very long, but Thorne was able to work alongside actors like Christian Slater and Taylor Lautner. Not only that, but she was also able to win a Young Artist’s Award for Supporting Young Actress. By many, this was considered to be her “breakout” role. 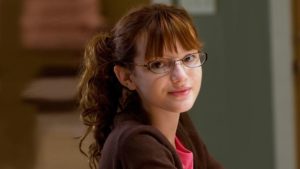 In the years to follow, she dabbled in a couple of other smaller projects. She guest starred in an episode of October Road. She had a major role in the USA Network webseries Little Monk. Bella also appeared in two movies: Forget Me Not and Raspberry Magic. The latter would premiere at the Cinequest Film Festival in 2010. During that very same year, she acquired a recurring role in the HBO series Big Love. Big Love, which is widely considered one of the best television shows of all time, featured the work of people like Bill Paxton, Chloe Sevigny, Ginnifer Goodwin, and more. This high-profile part would allow Bella to take on even large ones in the future.

Bella Thorne’s Disney Career and Beyond

In her claim to mainstream fame, Bella Thorne was cast as dancer CeCe Jones in the Disney Channel sitcom Shake It Up. Shake It Up would end up receiving three seasons, for a total of 75 episodes. Bella worked alongside Zendaya, who would also see her career take off as a result of the show. Through Disney, Bella was able to do all different kinds of things with her career. In 2012, her and Zendaya released the EP Made in Japan, which was a commercial and critical success. Bella was also able to star in the 2012 Disney television film Frenemies. Following her monumental success on Shake It Up, which would go on to win her a couple of accolades, she looked to pursue a more mature, diverse career. She began in 2014, by playing Adam Sandler’s daughter in the movie Blended. She also saw a large role in the 2014 comedy Alexander and the Terrible, Horrible, No Good, Very Bad Day. 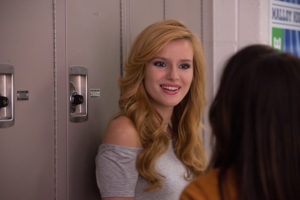 Although her fans were looking forward to seeing an album release, she ended up just putting out an EP called Jersey. Thorne cited concerns that the album didn’t sound quite as she thought it should, and so it was cancelled. However, Jersey was well received enough, and it was able to coast along Billboard’s Hot Dance Club Songs chart for several weeks, with its peak position being at number 10. During this time, Bella also had a large part in the MTV television series Scream. Bella also had a large part in The Duff, a critically and commercially successful teen comedy. Over the next couple of years, she will see some other major roles, too. She is currently set to star in an American remake of the Japanese film Midnight Sun. 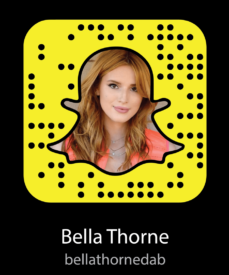 If you would like to follow Bella Throne on Snapchat, then you can just use the app to scan the snapcode above. Otherwise, you can just click the link right here.

Are you interested in checking out Bella Thorne’s official public Facebook page? Then all that you need to do is look her up under the username @bellathorne. Alternatively, click the link here.

Bella has over 6 million followers on Twitter. In case you aren’t one of those 6 million people, then you should know that she goes under the Twitter handle @bellathorne. Take a look at her page by clicking the link right here.

Given her status as a young female celebrity, it isn’t all that surprising that Bella Thorne runs a successful Instagram account. Her username on the platform is @bellathorne, and you can check her account out by clicking the link here.

Bella doesn’t actually have a Kik account. Due to rampant impersonators, she has actually taken to Twitter on more than one occasion to caution her fans. If you’re talking with someone on Kik who claims to be this former Shake It Up star, then they’re probably lying.