Blake Lively has seen a wide variety of roles in both television and in movies, and she is undoubtedly one of the most popular young actresses of this generation. Her career started small in 1998, but it has only grown since then. From Green Lantern to The Sisterhood of the Traveling Pants, she has appeared in plenty of different high-profile Hollywood productions. Blake was born in Los Angeles, California on August 25th, 1987. If you’re interested in learning more about this Hollywood star, then read on. 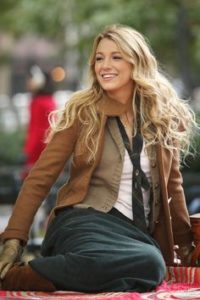 Blake grew up in the Tarzana neighborhood of Los Angeles, and she was surrounded by people who worked in the entertainment industry right off the bat. Her father, Ernie Lively, was an actor, and her mother, Elaine Lively, was a talent scout. When she was very young, she used to accompany her parents to their acting classes when they didn’t want to leave her with a sitter. This early exposure to the craft would prove instrumental to her development as a performer. While Lively was attending Burbank High School, she was cast in a major role in the film The Sisterhood of the Traveling Pants, a film adaptation of the novel of the same name. Blake would film her part in this role while she was still in high school. (She had appeared on the screen before, but they were mostly just cameo appearances or small, small roles.)

Just one year later, she starred alongside the likes of Justin Long and Jonah Hill in the comedy movie Accepted. The movie didn’t do all that well, and it received poor reviews, but Blake was praised for her performance. In both of these movies, Lively stood out among her co-stars as someone capable and naturally gifted. She saw her dramatic breakthrough in Elvis and Annabelle, a relatively small movie that was primarily shown at festivals and through HBO. Her phenomenal performance in this starring role caused other major productions to seriously look at her as someone who could boon a major movie or television series. As it turns out, she would do exactly that when she appeared in the show Gossip Girl between 2007 and 2012. This long-term, recurring role allowed her to acquire the exposure that she would need to take her career even further.

Starting in 2010, Blake really saw her career kicked into a whole other gear. In 2010, she had a prominent role in Ben Affleck’s movie The Town, which would go on to become a commercial and critical hit. It would end up earning co-star Jeremy Renner an Academy Award nomination for Best Supporting Actor. In 2011, she starred alongside Ryan Reynolds in the movie Green Lantern, where she depicted Carol Ferris. Although the movie notoriously flopped, it would still prove to be really important for Blake. Her and Reynolds would end up dating shortly after the film premiered, and today they’re married with two kids. Green Lantern may be seen as the laughingstock of superhero movies, but hey, at least she got something out of it! 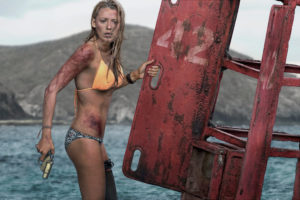 In the years to come, Blake would continue to see roles in movies that would go on to become very successful. 2012’s Savages received mixed reviews, but was a modest box office success. The Age of Adaline in 2015 also received mixed reviews, but its box office performance was solid and Blake Lively’s performance was seen as one of the best parts of the movie. One of Blake’s biggest performances came in 2016’s The Shallows, a survival horror movie. Critical response to The Shallows was positive, and critics raved about Lively’s stirring, emotional performance. It almost ended up making $119 million on a $17 million budget, which obviously makes it a huge box office success.

Blake Lively Outside of Film

Although Lively is best known for being an actress, that isn’t all that she does. She prides herself on her talents in the kitchen and in the home, and she has expressed interest in becoming a restaurateur as well as a professional interior designer. Over the years, she has made appearances in The Martha Stewart Show, Martha Stewart Weddings, and Elle Decor. A couple of years ago, she launched her own online home magazine called Preserve. People were excited about it, but in late 2015 she made the decision to close the site down and seek a relaunch sometime in the future. So even if she decides to retire from acting, rest assured in knowing that Blake Lively is talented in more than just one area. 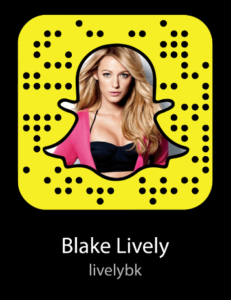 If you want to add Blake Lively on Snapchat, then all you really need to do is scan the snapcode displayed above with your app. If you don’t want to do that, then you can just click the link right here.

If you want to take a look at Blake Lively’s official, public Facebook page, then you can just look her up under the username @BlakeLivelyOfficial. Alternatively, you can also click this link here to view it.

Blake has over 600,000 followers on Twitter, but if you aren’t one of those 600,000 people then I highly recommend that you follow her. You can look her up under the username @blakelively, or by clicking the link right here.

Blake Lively is very popular actress, and like many other popular actresses she has a successful Instagram account. Take a look for yourself by searching for her under the username blakelively. You can also click the link here to view her account.

Unfortunately, Blake Lively doesn’t have a Kik account that is publicly available at this time. If you have met someone on the social media platform claiming to be Blake, I would take their claim with a hefty grain of salt.