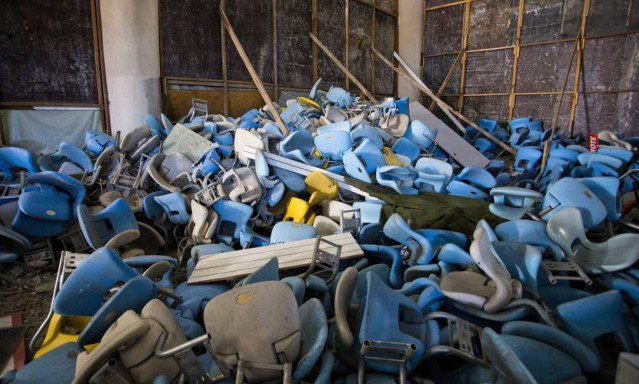 The Maracana Stadium is one of the most iconic football stadiums in the world. The stadium, opened in 1950, has seen great games and was recently part of the sporting events hosted by Brazil. The opening and closing ceremony of the 2016 Rio Olympics took place in the stadium. But it appears that the stadium has now been abandoned due to a contract dispute.

The Maracana stadium is the biggest in Brazil and renovations have been done in the past to keep it in good condition for sporting events. But the famous pitch is now looking like it needs another renovation as it has been abandoned for months now. The stadium, which also hosted a total of seven World Cup matches in 2014, has lost thousands of seats, which have been removed and placed in other areas of the stadium.

In some areas of the stadium, parts of the ceiling have fallen down. The conditions of the stadium are not very good, despite being used a few months ago for the football tournament of the 2016 Rio Olympics. Work to keep the stadium in good condition has been suspended after companies involved were found guilty for corruption. The companies were reportedly increasing the costs.

The dispute between the company in charge of the stadium and the Olympic organizing committee is also not helping the stadium. The dispute has left the stadium without any maintenance.

The stadium has been used by Rio’s football clubs in the past but since the renovations, the cost to have matches there has increased. The stadium has been renovated three times in seventeen years and while millions have been spent on getting it ready for sporting events such as the World Cup and Olympics, the stadium is now abandoned as football clubs in the city don’t have the money to stage matches there.

The stadium was opened in 1950 to host the World Cup and was where Brazil faced Uruguay in the final group stage match. Over 200,000 people attended the game and that number remains the highest attendance ever at a football match.