Chris Brown is an R&B singer with seven albums and an eighth one on the works, more than a hundred singles, and 63 awards with 200 nominations. He is best known for songs like “I Can Transform Ya”, “Run It!’, and “With You” to name a few.

Born on May 05, 1989, in Tappahannock, Virginia, Brown had an early exposure to music thanks to the records his parents owned. He had a knack for dancing and singing which he developed through practice and talent shows. Eventually he attracted the attention of a scout who was sent by the production team Hitmission Records. Brown’s singing chops was enhanced with the help of a vocal coach and the team also aided him in the creation of his demo tape. One of these tapes landed on the desk of Tina Davis, the then-A&R vice president of record label Island Def Jam Recordings. Davis summoned Brown to New York for an audition which he immediately got after an impressive performance.

Negotiations with the label continued until Davis lost her position. Upon learning of her dismissal, Brown called Davis and she became his manager. She distributed his tapes to the other record labels until she decided that Jive Records was the best bet for Brown due to the label’s commendable handling of budding artists. Brown worked on recording songs and, out of the 50 he made, 14 were picked by Jive for his debut album. Chris Brown was released in 2005 and was commercially successful despite mixed reviews. Two years later his second album Exclusive fared better in the ears of critics and earned Brown numerous nominations from different awards.

Brown’s subsequent albums namely Graffiti (2009), F.A.M.E. (2011), and Fortune (2012) sold well despite failing to appease critics. He made a comeback in 2014 with X which amassed positive reviews, and his latest album Royalty (2015) was met with ambivalence. Brown is currently working on his next album Lost & Found (Heartbreak On A Full Moon) with new singles “Party” and “Grass Ain’t Greener”, although there is no set release date yet.

Brown made his big screen debut in the 2007 drama film Stomp the Yard. He also appeared in a few episodes of television series The O.C. during the same year. Some of his other film appearances include Into the Woods (2008), Takers (2010, he also served as executive producer), and Battle of the Year (2013).

Brown owns his own clothing line named Black Pyramid plus 14 branches of popular hamburger chain Burger King. In 2007 he established the label Chris Brown Entertainment / Culture Beyond Your Evolution (CBE), and seven years later he launched his own modeling agency named Legendary Faces. He currently serves as an ambassador for Philipp Plein, a luxury brand.

Last May 2016 Brown was approached by German apparel retailer Snipes for a design collaboration for their summer collection.

Brown is well-known for his past relationship with singer Rihanna which started around 2008 and split in 2009 after the notorious assault issue. The two got back together in January 2013 and finally parted ways two months later. Brown was also linked to model Karrueche Tran and singer Natalie Mejia.

In 2014 Brown welcomed his baby daughter Royalty with former girlfriend Nia Guzman. The two were locked in a court battle over Royalty which ended in joint custody. Brown is reportedly dating Krista Santiago but it is yet to be confirmed if they are really an item. 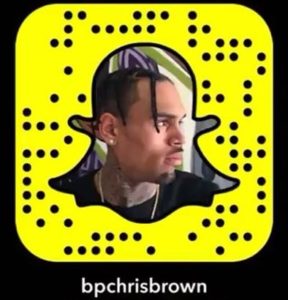 Chris Brown’s Kik Username or Code – Brown doesn’t have a Kik account as of 2017. If he makes one we’ll update this page so stay tuned. Be wary of accounts that use his name as they are most probably posers or fanmade.