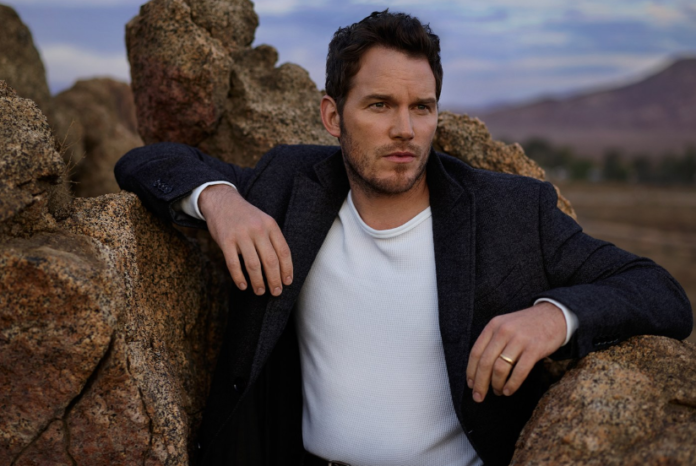 Within a relatively short period of time, Chris Pratt went from being a goofy television actor to being one of the most successful stars in Hollywood. Due to his work in major films like Jurassic World, Guardians of the Galaxy, and The Lego Movie, he is probably one of the hottest and most rapidly rising actors out there. Chris was born in Virginia, Minnesota on June 21st, 1979. Although this guy didn’t grow up dreaming to be a big action movie star, he has definitely reached that level of stardom today.

Chris Pratt grew up with a blue collar family in a blue collar part of the country. He was raised predominantly in Lake Stevens, a town in Washington. His mother worked at a supermarket, and his dad was a miner. In high school, Chris wanted to become successful, but he still hadn’t decided what he wanted to be when he grew up. In high school, he was a slightly above average wrestler. Upon graduation, he attended community college for a very short time. He actually ended up dropping out before the first semester even ended, and Chris eventually found himself living out of a van in Maui, Hawaii. Although he obviously didn’t want to be homeless, Pratt has said that he was never really in danger in his life situation, and that he actually kind of enjoyed having so few responsibilities. 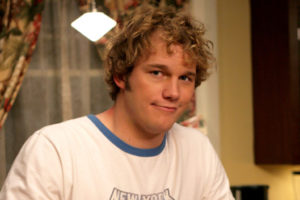 When Chris Pratt was “discovered”, he was a waiter at a restaurant in Maui. Rae Dawn Chong, an actress and director, wanted Pratt to appear in her directorial debut. As a handsome and athletically built young guy, it’s really not a surprise that people would be drawn to Pratt as a potential actor. This small role got Pratt really interested in the entertainment industry as a whole, and in the years to follow, he would only work to develop his career in the field. He appeared in a variety of minor productions, including The Huntress and The Extreme Team before he was able to obtain a long-term television role in Everwood, where he played the character of Bright Abbott.

Chris was on Everwood through 2006, appearing in a total of 89 episodes throughout the show’s duration. Later that year, he picked up a recurring role on another teen drama, The O.C.. He only appeared in 9 episodes, but it was definitely better than nothing. Chris dabbled a little bit in film, with small roles in movies like Walk the Talk, Wieners, and Wanted. However, television seemed like the real place for him at the time. He attempted to audition for the role of Captain James T. Kirk for the 2009 movie Star Trek, but he found himself humiliated and outclassed by his competition for the role. Thoroughly humbled by his experiences, Chris eventually found himself in a role that would change his career forever. 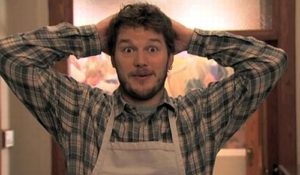 Chris was cast as Andy Dwyer in the show Parks and Recreation, an NBC comedy that starred the likes of Aziz Ansari, Amy Poehler, Rashida Jones, and Aubrey Plaza. Andy was meant to be a short-term character, but the producers of the show found that he was so likable that he should become a main cast member. The show lasted through 2015, and it served as a vehicle for Pratt’s career. It helped him become someone who was recognized for more than just teen drama, and as Andy become one of the show’s most popular characters, Chris Pratt found himself gradually becoming a household name.

Chris Pratt as a Movie Star

During his early career, Chris found himself being typecast as a more goofy, comic character. There wasn’t anything wrong with that, but he wanted to show the world that he had more range than that. This plan was put into place starting in 2012, when he had a major role in the controversial action movie Zero Dark Thirty. People were surprised by his performance, not expecting to see something so high-quality from someone who wasn’t really known as a dramatic actor at the time. In 2014, he obtained an even larger role by being cast as Peter Quill in the Marvel movie Guardians of the Galaxy. His outstanding performance in the film led to people comparing Pratt to other action movie stars, like Harrison Ford. 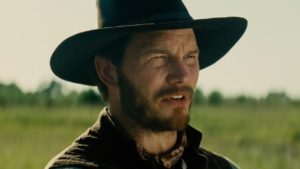 He maintained his momentum through 2015, when he starred in the blockbuster hit Jurassic World. (Chris had always dreamed of appearing in one of these movies, so it was really a dream come true for him.) Although his character received mixed reception, it still allowed him to cement his reputation for being a Hollywood leading man. This reputation has only been solidified in 2016, when he appeared in the Western movie The Magnificent Seven and in the science fiction movie Passengers. Chris Pratt started small, but he has since become one of the biggest names in Hollywood. 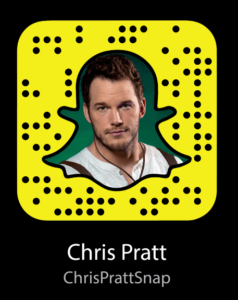 If you want to add Chris Pratt on Snapchat, all you have to do is click the link here.

If you want to check out Chris Pratt’s personal Facebook page, click the link here. His page is under the name @PrattPrattPratt.

Chris Pratt’s Twitter account is under the name @PrattPrattPratt. Take a look by clicking the link here.

Chris Pratt has an Instagram account, and it’s under the username prattprattpratt. Check it out by clicking the link here.

Chris Pratt doesn’t have a Kik, or at the very least he hasn’t seen any reason to share it. As of 2017, he doesn’t have an account to his name. If you have someone on Kik claiming to be Chris, then you’re probably being tricked.