Demetria Devonne Lovato, or also known as “Demi” is best known for being an American singer and songwriter. Born on August 20th, 1992, Demi Lovato broke into the American pop culture scene when she starred in several different Disney films. Born in New Mexico, the star initially did not have a lot of opportunity, but after moving to Texas, Lovato began studying music and really practicing her passions. Her Disney television career would soon transform into a singing career, which evolved into her touring around the world and having a triple platinum record. Demi Lovato has always had love for music, and she brought that passion to every song that she created.

How Did Demi Lovato Become Famous?

Lovato began studying music when she was seven when she started taking guitar and piano lessons. She loved all things musical so she decided to start taking things seriously and take voice and dance lessons. She got her first role on the Barney and Friends show as a little girl named Angela. After spending a few seasons on this show, she was contacted by Disney to try out for a role. That role was for Camp Rock, an upcoming Disney film in which she would be one of the main characters. She also tried out for Sonny with a Chance while she was there and actually got both roles. Camp Rock debuted in June of 2008 and was instantly seen by millions of people around the world. She had instantly become a mini celebrity and was adored all around the world.

Before the movie was aired, she was asked to also sing for a few songs for the movie, considering she had prior vocal training. The songs were released after the movie and again, fans flocked to it. Her songs became so popular that she began her own tour around the world, with a few songs that she had already had in the making.

Her first album Don’t Forget, was released in September of 2008 and was very well received by her fans. The album turned out to be a huge success and landed a number two spot on the Billboard Hot 100 list. During its first week of sales , an estimated 90,000 copies were sold in the United States alone. She collaborated with the upcoming band, Jonas Brothers, and soon after, began touring around the country with them. The album itself would end up selling over 500,000 copies and became gold certified. The lead single on the album was Get Back and reached one of the top spots on the Billboard Hot 100 list.

After her album was released, Demi Lovato began working on creating more and more music. In 2009, she released Send It On, which was a song dedicated to the Disney’s Friends for Change foundation, a charity that was trying to spread news on environmental change. All of the money that the song made was donated to support the cause and this gave Lovato a lot of fame. Her second album, Here We Go Again, was released in July of 2009. This album was heavily reliant on an acoustic guitar and was received very well by her fans. This was Lovato’s first number one album as it reached the number one spot on the Billboard Hot 100 list for several consecutive weeks.

After this album was released, she began her first national tour, selling out venues all across the world. She was constantly having huge guest stars like the Jonas Brothers, David Archuleta, and Jordan Pruitt. She would later go on to receive the Teen Choice Award for one of the songs on this album. It was after this album was released that Disney invited her back to record for Camp Rock 2: The Final Jam, which would be the sequel to her first film. She accepted the offer and the film was not as well received as the first one. Despite the negative feedback from movie critics, the soundtrack went on to take the number two spot on the Billboard Hot 100. All the while she was doing this, Lovato was recording for Sonny with a Chance. She would eventually drop the television show to pursue better opportunities for herself.

The opportunity that came after this television show was The X Factor. Lovato was asked to come onto the show and became a guest judge and coach. She would join Simon Cowell, Brittney Spears, and LA Reid as the judges for the second season. She continued her work on the show and all the while releasing a bunch of singles for different events that were occurring. Like many others, Lovato was affected by the Sandy Hook Shooting and released a song, Angels Among Us, which was dedicated to them and the proceeds to that song would be donated.

During her time on The X Factor, Lovato would release an e-book, Demi, on iBooks. Alongside her new book, she would release a new single, Heart Attack, which was very well received by her fans. This song made it to number twelve on the Billboard Hot 100 list and she was planning another tour around the world. 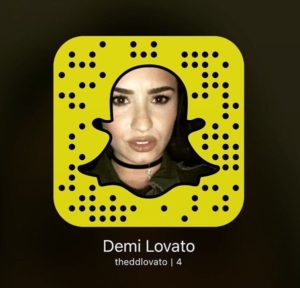 Note that this is the only snapchat that the young star has. Be careful when talking with accounts that don’t have the same name, as she has reported seeing multiple accounts claiming to be her!

These are all of her official social media pages, so be sure to check these out if you want to know all the things about her! She most often updates her Instagram and her Twitter, but having her on Snapchat is a huge bonus as you will get to see some cool behind the scenes stuff like setting up for concerts, and her daily outfits!