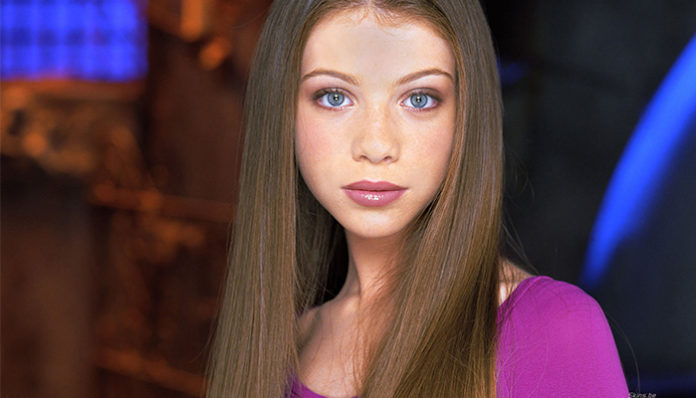 Emmy Award-nominated actress Michelle Trachtenberg is perhaps best known for her role in the series, Buffy the Vampire Slayer. Like many artists out there, the brunette started her career in the show business earlyーshe appeared on television for the first time at the tender age of three. As a young girl, she appeared in over a hundred different commercials however it wasn’t until she was nine years old that she landed her first credited role in the Nickelodeon drama, The Adventures of Pete & Pete (1994). Continuing to appear in front of the cameras, she later made her feature film debut in Louise Fitzhugh’s Harriet the Spy (1996). From there, Michelle went on to appear in a handful of series including Space Cases (1996), Meego (1997), Guys Like Us (1998), and Inspector Gadgets (1999). Nearly half a decade after making her debut, the brunette finally received a merited break in 2000, when she secured a lead role in The WB series, Buffy the Vampire Slayer. A major hit, it swiftly catapulted Michelle into celebrity status.

A year after the new millennium, Michelle also served as the host of the Discovery Kids series, Truth or Scare (2001). Met with praise, her narration on the show eventually netted her a Daytime Emmy Award nomination in 2004. Since then, Michelle’s popularity has only gone up; throughout the years, she has gone on to star in multiple television shows including Six Feet Under (2004), Robot Chicken (2006), Gossip Girl (2008), Mercy (2009), and Weeds (2011), to name a few. An actress with over fifty credits to her name, her work has garnered her several industry awards including a Women’s Image Network Award (e.g. Actress MFT Movie), three Young Artist Awards (e.g. Best Performance in a TV Drama and Feature Film), and a Special Jury Prize from the Sarasota Film Festival (e.g. Breakthrough Performer). Most recently, she starred in a TV film called, The Christmas Gift which premiered in 2015.

So what has the 31-year-old star been up to as of late? Is she still actively pursuing roles on film and television? If so, what are some of her latest projects? What happened to Michelle Trachtenberg? Where is she now in 2018? 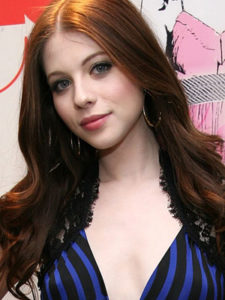 Born on October 11, 1985, in New York City, New York, Michelle Christine Trachtenberg is the daughter of Michael and Lana Trachtenberg, a fibre optics engineer and a bank manager. The youngest out of two children, she has an older sister named Irene and is of German and Russian ancestry.

A natural performer, Michelle has been acting ever since she was old enough to walkーat three years old, she made her television debut in a Whisk detergent commercial. Proving to have exceptional talent, she later took on over a hundred different advertising gigs as a young girl. By the time she was nine, she already had her first credited acting role in the Nickelodeon series, The Adventures of Pete & Peteーone which she played for two years. A couple of shows later, Michelle made her feature film debut in the family drama, Harriet the Spy (1996); it was also her first time portraying a title character.

Determined to make it big as an actress, she later relocated to Los Angeles, the country’s entertainment capital; while her mother accompanied her to the new city, her father remained with her sister in New York. Later that year, Michelle starred in the CBS sitcom, Meego (1997) alongside Bronson Pinchot, Jonathan Lipnicki and Will Estes. Although it was short-lived, it eventually earned the up-and-coming star a Young Artist Award for “Best Performance in a TV Comedy Series” in 1998. She then appeared in a comedy series called, Guys Like Us (1998) before returning to the big screen in the films, Inspector Gadget (1999), and Can’t Be Heaven (1999). After many years of climbing up the industry ladder, Michelle finally received a big break in the new millennium when she joined the cast of Buffy the Vampire Slayer (2000), as one of the main leads in season five. 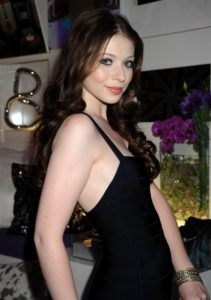 Created by American screenwriter Joss Whedon, Buffy the Vampire Slayer originally premiered on The WB on March 10, 1997. Starring Sarah Michelle Gellar as Buffy Summers, the series followed the young girl as she struggles to balance her teenage life with her destiny of fighting demons and vampires as “The Slayer”. Critically acclaimed, it regularly attracted millions of young audience members to the screens every week.

Immensely popular, Buffy the Vampire Slayer received numerous positive reviews and was highlighted by multiple publications including Time Magazine, Rolling Stone and The Hollywood Report. Hailed as one of the greatest TV shows of all time, it played a significant role in the launch of Michelle’s acting career. Although the series started in the late 1990’s, it wasn’t until 2000 during its fifth season, that the actress made her debut as Dawn Summersーthe title character’s younger sister. Although she joined the cast late, viewers quickly warmed up to her character; she ultimately continued to play as Dawn until the end of the series in May 2003. For her stunning performance, Michelle received a Young Artist Award and was also nominated for three Saturn Awards, and a Teen Choice Award in the 2000’s.

After the series came to an end in 2003, she guest starred in the HBO drama Six Feet Under (2004) where she appeared for four episodes. Landing another film role, she returned to the big screen in Tim Fywell’s figure skating film, Ice Princess in 2005. Written by Hadley Davis and Meg Cabot, it revolved around a teenage girl who leaves her promising academic life behind her in order to pursue her newly found dreams of becoming a professional figure skater.

Cast as the title character, Michelle played the role of Casey Carlyleーthe teen in question; starring alongside her in the film is Joan Cusack, Kim Cattrall, Hayden Panettiere, Trevor Blumas, Juliana Cannarozzo and Erik King. Released in theatres on March 18, 2005, Ice Princess grossed over $6.8 million in Canada and the United States during its opening weekend and ranked number four at the box office. Despite the favourable reviews that it garnered from critics, its commercial performance was quite lacklustre; by the end of its theatrical run, it had earned a total of $27.6 millionーjust a little over $2 million more than its production budget of $25 million. Nonetheless, Michelle received much applause for her acting in the movie. 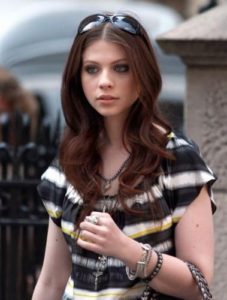 In 2008, Michelle signed on to portray a recurring character in the popular teen drama, Gossip Girls. Based on a novel series of the same name, it originally premiered on The CW on September 19 2007 and starred Blake Lively, Leighton Meester, Chace Crawford, Penn Badgley and Taylor Momsen; it wasn’t until the show’s fifteenth episode entitled, Desperately Seeking Serena” that the actress made her grade appearance in the series.

A guest star, she portrayed the role of Georgina Sparksーa young woman with a dark past who recently left rehab; although Mischa Barton was originally cast for the part, the role ultimately went to Michelle after she decided to decline the offer. After appearing in a small handful of episodes in the first season, she returned for a multi-episode arc in the second half of season two; she later appeared in the season three finale, and throughout season four, five and six. Although Gossip Girl received mixed reviewsーmany criticizing it for its deviations from the original booksーit quickly gained a huge following, especially amongst younger viewers. By the end of its run in the winter of 2012, the series had broadcasted well over a hundred episodes and had accumulated over a dozen Teen Chocie Awards.

The following year, the actress appeared in Burr Steer’s comedy film, 17 Again (2009). Written by Jason Fildardi, it centred around a 37-year-old who gets a second chance to relive his mediocre teenage years after meeting a janitor by a bridge. While Zac Efron played the main lead of Mike O’Donnell, Michelle portrayed the character of Margaret Sarah O’Donnellーhis teen daughter who wants nothing to do with his father; other actors in the film include Leslie Mann, Sterling Knight, Thomas Lennon and Melora Hardin. Screened in theatres on April 17, 2009, 17 Again exceeded even the filmmaker’s expectations; it grossed over $23 million and ranked number one at the box office in its opening weekend. In spite of its financial success however, it was met with generally mixed reviews; while some praised it for being a “pleasurable teen comedy”, others panned it for its “overused formula”. Still, it managed to net over $136 million worldwide by the end of its run.

In 2013, Michelle appeared in a film adaptation of the non-fiction book, Killing Kennedy. Starring actor Rob Lowe as John F. Kennedy, its cast list also included Will Rothhaar, Ginnifer Goodwin, Will Rothhaar and Jack Noseworthy. Featuring a screenplay by Kelly Masterson, the TV movie dramatized the presidency and eventual assassination of the President in the 1960’s. Released on the National Geographic Channel on November 10, 2013, it drew in over three million viewers during its original airingーbreaking the previous record held by Killing Lincoln (2011). While it received a fair amount of negative reviews, Killing Kennedy ended up being nominated for multiple awards including three Primetime Emmy Award nominations, a Screen Actors Guild Award nomination and a Critics’ Choice Television Award nomination, amongst a few others. For her portrayal of Marina Oswaldーthe then-wife of assassin Lee Harvey Oswald, she won a Women’s Image Network Award in 2014. 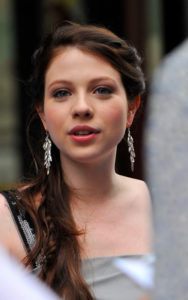 This past fall, Michelle co-starred in a made-for-television film called Sister Cities (2016), which made its way onto the screens on September 17, 2016. Adapted from a well known play of the same name, it revolved around four estranged sistersーas different as can be in terms of personalityーwho come together after many years to mourn the alleged death of their mother. In it, the actress played the role of Dallas Baxter, the “perfectionist” sister; her three on-screen siblings were portrayed by Stana Katic, Jess Weixler and Troian Bellisario. Filmed in Los Angeles, Sister Cities was lauded by many viewers for its excellent acting and storytelling.

Other than that, it doesn’t look like the brunette’s been starring in too many roles as of lateー she did however, appear in an episode of Last Week Tonight with John Oliver (2016) and Chopped Junior (2016).

If you’d like to stay connected with the American actress, you can do so by following Michelle Trachtenberg on Twitter at @RealMichelleT.