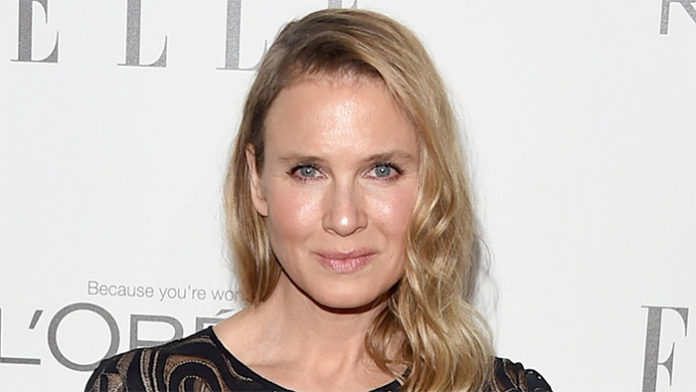 The daughter of a nurse, Renee Zellweger first made herself known in the Hollywood scene in the horror film, Texas Chainsaw Massacre: The Next Generation (1994). As a teen, the blonde first got involved in acting as a member of her high school drama club; following her graduation, she went on to take drama as an elective at the University of Texas at Austin. During her junior yet, Zellweger began seeking work opportunities as her father had been laid off. Aside from waitressing, she also started to direct her attention towards acting, as a means of supporting herself financially. After playing in a few commercials, she was able to attain her card for the Screen Actors Guild. Continuing to act even after she had graduated from college, she soon found herself starring in a number of low-budget television productions. For instance, Zellweger made her TV debut in the film, A Taste for Killing (1992) at the age of twenty three. From there, she landed roles in Murder in the Heartland (1993), and Dazed and Confused (1993).

A couple of minor roles later in 1994, the blonde beauty receive a highly anticipated breakthrough when she was cast as one of the lead characters in the slasher film, Texas Chainsaw Massacre: The Next Generation. While the horror flick didn’t perform ideally at the box office, it garnered the actress much applause for her performanceーwhich also happened to be her first starring role in a motion picture. The next year, she was met with another huge opportunity when she was offered a main role in the coming-of-age film, Empire Records (1995), which once again boosted her popularity as an actress. Throughout the rest of the 90’s, Zellweger continued to star in a handful of movies including The Whole Wide World (1996), Deceiver (1997), and A Price Above Rubies (1998). After the arrival of the new millennium, she received her first Oscar nomination for the film, Bridget Jones’s Diary (2001).

In 2002, Zellweger took on a starring role in the musical, Chicagoーwhich went on to earn her an Academy Award nomination and a Golden Globe Award. The following year, the blonde received an Oscar, a BAFTA Award, a Screen Actors Guild Award, and another Golden Globe for her stunning performance in the war epic, Cold Mountain (2003). Some of her other film projects include: Shark Tale (2004), Cinderella Man (2005), Bee Movie (2007), New in Town (2009), and My Own Love Song (2010). After taking a prolonged break from acting in 2010, she returned to the big screen in the thriller, The Whole Truth in 2016. That same year, she also reprised her role as Bridget Jones in Bridget Jones’s Baby (2016).

So what has the blonde beauty been up to as of late? Now that she’s returned to the show business, what new roles have she been offered? What happened to Renee Zellweger? Where is she now in 2018? 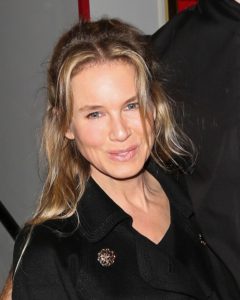 Born on April 25, 1969 in Katy, Texas, Renee Kathleen Zellweger is the daughter of Emil Erich Zellweger, an engineer who worked in the oil business and Kjellfrid Irene Andreassen, a nurse. As a teen, the blonde was an avid athlete; not only was she into soccer, but she also played football, baseball and basketball.

A well-rounded student at Katy High School, she was a member of the speech, cheerleading, gymnastics teamsーshe was also a part of the drama club. Following her high school graduation, Zellweger went to the University of Texas where she studied English. During her time there, she took an elective in drama, which helped to pique her interest further in acting. In her junior year, she found herself looking for work after her father had been laid off at his job. Consequently, Zellweger began working as a waitress to support her own education.

Eventually, she began seeking small acting gigs to further support herself. Landing a spot in a few commercials, Zellweger later attained her Screen Actors Guild card after starring in a Coors Light advertisement. At one point, she also worked briefly as a local hire, appearing in various uncredited roles in films. In 1992, she made her television debut in a TV film called, A Taste for Killing. The next year, she appeared in the mini-series, Murder in the Heartland (1993), and in the low-budget movie, Dazed and Confused (1993). In 1994, she appeared in the motion pictures Reality Bites, and 8 Seconds, prior to securing a starring role in the slasher film, Texas Chainsaw Massacre: The Next Generation. 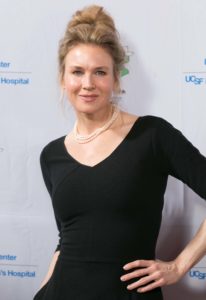 Often regarded as her breakthrough role, Texas Chainsaw Massacre: The Next Generation gave Zellweger the opportunity that she needed to display her talents to the world. Directed and written by Kim Henkel, it told the story of a group of teens, who after getting themselves into a car crash in the middle of the woods, find themselves wandering into an old farmhouse inhabited by a family of cannibalistic psychopaths.

Starring opposite of actor Matthew McConaughey, the blonde played the female lead of Jennyーone of the four friends. In the film, she is joined by Sean, Barry and Heather who are portrayed by John Harrison, Tyler Shea Cone, and Lisa Marie Newmyer respectively. Another one of the film’s main antagonists, Leatherface, is played by Robert Jacks.

Distributed by Columbia Pictures, Texas Chainsaw Massacre: The Next Generation was released on August 29, 1997. Shortly after reaching theater screens, it grossed approximately $53,000 in its opening weekend across 23 locations. Later re-released, the film grossed an additional $186,000 in the United States. A commercial flop, having been produced on a budget of $600,000, the horror film received mainly negative reviews from critics. In addition to being panned for its incoherent script, many also noted its relatively unknown cast. Having said that, some individuals did appreciate the slasher; for instance, both the Los Angeles Times and Variety Magazine offered the film favourable reviews.

In 1995, Zellweger received wide acclaim for her role in the coming-of-age film, Empire Records. Directed by Allan Moyle, it revolved around a group of record store employees who try, to the best of their abilities, to prevent the shop from being bought by a big-box chain. One of the lead cast members, the actress played the part of Ginaーa cashier at the store, who is also the best friend of Corey (played by Liv Tyler). Boasting an ensemble cast, Empire Records also featured Anthony LaPaglia, Maxwell Caulfield, Rory Cochrane, Debi Mazar and Johnny Whitworth.

Released in theatres on September 22, 1996, Empire Records was unfortunately, a commercial flop. By the end of its run, it had only managed to gross a little over $303,000 in ticket sales. Given many negative reviews from various publications such as The Chicago Sun Times and TV Guide, it went on to earn a 24% approval rating on Rotten Tomatoes. In spite of its lacklustre performance however, the film did manage to boost Zellweger’s fame further as an actress. 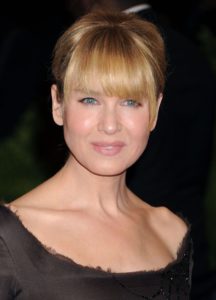 In the fall of 2000, the actress played the title character in the black comedy, Nurse Betty alongside Chris Rock, Greg Kinnear and Morgan Freeman. Written by James Flambert and John C. Richards, the movie revolved around a Kansas waitress (played by Zellweger) who experiences a nervous meltdown after standing witness to her husband’s murder; following the incident, she begins obsessively pursuing her favourite actor, George McCord (played by Greg Kinnear). Aside from the previously mentioned cast members, Nurse Betty also included appearances from Pruitt Taylor Vince, Aaron Eckhart, Harriet Sansom Harris and Allison Janney.

Distributed by USA Films, the comedy flick made its way to theatres on September 8, 2000. Upon its release, Nurse Betty reached number two at the North American box office, taking in over $7.1 million during its opening weekend. Well-received by theatre goers and critics, the film garnered many praises for its imaginative script and talented cast; it currently holds an 84% rating on Rotten Tomatoes. Despite the applause that it received, the movie was ultimately a commercial flopーas it only earned $29 million from a $35 million budget. Regardless, Nurse Betty netted a number of awards including two Black Reel Awards, an Image Award, and three Satellite Awards. Recognized for her brilliant talent, Zellweger received her first Golden Globe Award for the category of “Best Actress in a Motion Picture Musical or Comedy” in 2001; she was also given an aMerican Comedy Award, and an Actress of the Year Award form the London Film Critics.

In 2002, Zellweger worked with director Rob Marshall in the comedy film, Chicago. Her first musical, it starred the actress as Roxie Hartーa murderess who finds herself in jail in the 1920’s. Featuring a screenplay by Bill Condon, it revolved around Hart, and another murderess by the name of Velma Kelly (played by Catherine Zeta-Jones), who fight against each other for fame behind bars. In addition to the two actresses, Chicago‘s cast list also included Richard Gere, Queen Latifah, John C. Reilly, Taye Diggs and Christine Baranski, amongst others.

After premiering at the Samuel Goldwyn Theater, Chicago was released nation-wide on December 27, 2002 in the United States. A massive box office hitーperhaps the first that Zellweger had been a part ofーit grossed over $2 million in its initial weekend across 77 screens. In the end, it managed to earn more than $306 million across the globe against a $45 million budget, rendering it a commercial success. Featuring a list of musical numbers, the film received widespread acclaimーmainly for the casts’ performances and superb directing. Hailed as one of the “Best Screen Musicals” by The Daily Telegraph, the musical went on to earn more than 40 industry awardsーincluding an Academy Award for “Best Picture” and a Golden Globe for “Best Motion Picture – Comedy or Musical”. Having put on a stunning performance, Zellweger was also awarded with a Golden Globe Award and an Oscar nomination.

Throughout the rest of the 2000’s, the actress has starred in several high-profile films including Cold Mountain (2003), Bridget Jones: The Edge of Reason (2004), Cinderella Man (2005), and Miss Potter (2006), to name a few. Following a six year absence from acting, she returned in the thriller, The Whole Truth in 2016. 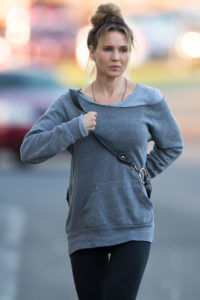 This upcoming October, Zellweger will be starring in the drama film, Same Kind of Different as Me (2017). Written and directed by Michael Carney, it will revolve around an art dealer who must befriend a homeless man in order to save him and his wife’s marriage. Boasting an all-star cast, the film will also feature Von Voight, Djimon Hounsou, Olivia Holt, Greg Kinnear and Dana Gourrier. Filmed in Jackson, Mississippi, the movie will be out in theaters on October 20, 2017ーso be sure to mark your calendars!

Aside from that, it doesn’t look like the actress has any other projects lined up for the new year. Stay tuned thoughーwe’ll let you know about her forthcoming roles as they come.

Unfortunately for us fans, the Academy Award-winning star is not a user of social media (yet, anyway)ーif you’d like to stay up-to-date with her latest roles, you can do by checking her official IMDb page.