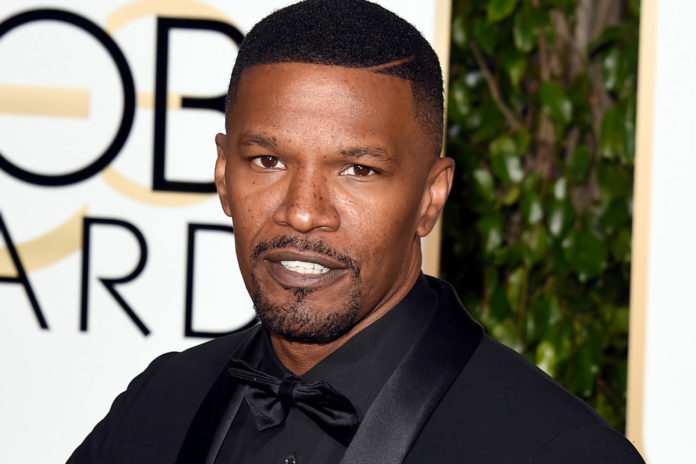 Over the course of the last decade or so, Jamie Foxx has become one of the most highly-regarded actor of our time. He has won numerous awards and accolades for his work in film, and he has also seen a modest degree of success in the music business. Foxx was born in Terrell, Texas on December 13th, 1967. He is also known by his real name, Eric Bishop. He had to put in a lot of work to reach where he is today, but all of that work has definitely paid off.

Interestingly enough, Jamie wasn’t always interested in being an actor. Growing up, his main exposure to anything entertainment involved playing piano and telling jokes. When he went to Terrell High School, he received very good grades and was also a top-tier athlete. His dream at the time was to play football professionally, and in his spare time he sang for a couple of local bands. Once he graduated from Terrell, he ended up attending United States International University on scholarship. He studied classical music while he was there, so obviously he didn’t have his heart set on becoming a world class actor or anything like that. Jamie’s first foray into anything like that came in 1989, when he told jokes at an open mic night on a dare. He used the name Jamie Foxx because he felt that it could be interpreted as a woman’s name, and he knew that female comics were called up before male ones. 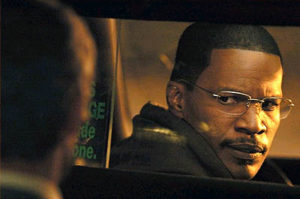 Foxx ended up doing pretty well for himself, and so he took the plunge into comedic acting. In 1991, he obtained a part in the sketch comedy show in Living Color. His work on the show was so solid that he was able to star in his own sitcom starting in 1996, fittingly titled The Jamie Foxx Show. The Jamie Foxx show ran through 2001, and although it wasn’t all that popular, it helped Jamie kick off his acting career in a major way. In the years to follow, his appearances in films Toys, Any Given Sunday, and Collateral stole headlines, and people were surprised that this athlete-turned-comedian could be such a strong dramatic actor. His work in Collateral earned him an Academy Award for Best Supporting Actor.

Collateral would certainly not be the last critically acclaimed role that Jamie Foxx would see. In 2004, he played the titular character in the movie Ray. Critics raved about Jamie’s powerful performance, and about the incredibly nuanced charisma that he brought to the character. His performance was so great that he ended up winning an Academy Award for Best Actor for the role. He also won a BAFTA Award for Best Actor in a Leading Role for the same part. Later, he would appear in movies like Jarhead, Miami Vice, and Dreamgirls. Each of these releases just helped to cement his reputation of being a strong, versatile Hollywood actor.  In the years to follow, he would appear in several other major roles. 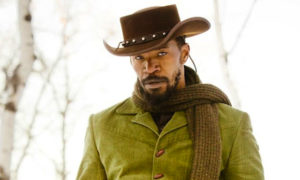 One of Jamie Foxx’s most iconic roles is his depiction of Django Freeman in the Quentin Tarantino movie Django Unchained. The film was commercially and critically successful, garnering a total of five Academy Award nominations. For his work in the role, Foxx earned a Black Reel Award nomination for Best actor. He saw yet another majorly successful role in The Amazing Spider-Man 2, when he played the movie’s main antagonist Electro. He is currently set to appear in two other movies in 2017, so I think that it’s safe to say that Jamie Foxx has really embraced the film industry.

As unbelievable as it sounds, Jamie Foxx’s music career may be even more successful than his film career is. While all of the acting that I mentioned above was going on, Jamie was hard at work and putting his musical education to work. In 1994, he released his debut album Peep This, which frankly did not do very well at all. However, coasting off of his recent success in acting, Foxx released his second album Unpredictable in 2005 to crazy sales. It sold well over 500,000 copies in one week, and it featured artists like Snoop Dogg, Ludacris, Common, and Kanye West. 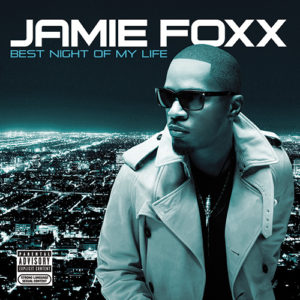 Needless to say, he was legitimizing himself as a musician around the same time he was legitimizing himself as an actor. His third album, Intiution, ended up topping the Billboard 200. The singles “Blame It” and “She Got Her Own” are still very popular songs today. In 2010, he released Best Night of My Life, which was also very successful. Thanks to the exposure that he has received from his acting career, Jamie Foxx has been able to very skillfully execute successful work in front of a camera and in the studio. 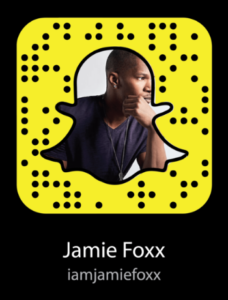 In order to add Jamie Foxx on Snapchat, you can either scan his official Snapcode above, or you can just click the link right here.

If you’re interested in checking out Jamie Foxx’s public, official Facebook page then all you have to do is look him up under the username @jamiefoxx. Alternatively, you could click the link here to check it out directly.

Jamie is really popular on Twitter, so if you haven’t already followed him, you should now. His username is @iamjamiefoxx, and you can check his page out by clicking the link right here.

Jamie Foxx’s Kik account is not publicly available at this time. If you have met someone on Kik claiming to be Mr. Foxx, I advise you to approach the situation with a healthy dose of skepticism.