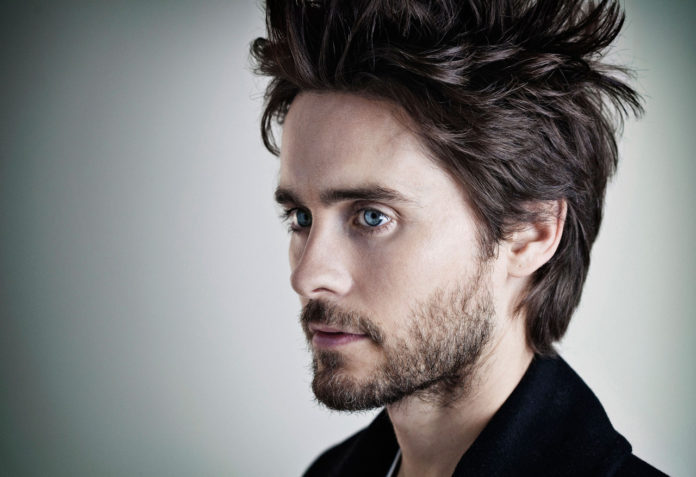 Jared Leto is best known for being an American actor and singer/songwriter. Jeto is someone who has been around show business his entire life, dabbling in both acting and singing. No matter what it is that Leto has set his mind to, he has always proven to be successful and has always been a fan favorite. Born on December 26th, 1971, Leto is currently 45 years old and shows no signs of slowing down his career. He has won many academy awards and golden globe awards for his acting experiences, and has also won awards for his time as a recording artist. His latest acting role was Joker in the hit movie, Suicide Squad, and was very well received by fans all around the world, and exposed himself as a serious actor who can take on any role given to him.

How Did Jared Leto Become Famous?

Jared Leto was born in Louisiana and lived a very average life growing up. His parents soon separated and his mother went and lived in a hippie commune and encouraged his sons to participate and be involved in the community. So naturally, growing up, Leto was exposed to a ton of different arts including music, photography, painting, and theater. This really stuck with him because he felt so inspired by all of these people doing what they love without letting anything else get to him.

Leto would continue going to school, but briefly drop out of high school because he felt he didn’t fit in. He would soon return to a prep school in Washington, and eventually finish his high school career in Virginia. Leto would continue his education at an arts school in Philadelphia and transfer to New York to finish at another school. While he was finishing up college, Leto wrote his first short film which he called Crying Joy.

As soon as he was finished college, he moved out to Los Angeles to commit himself to a directing career, while doing acting roles to pay the bills. He kept auditioning and would get a lot of calls backs, but never got any significant roles. In 1994, he finally got his big break when he was casted for an ABC drama called, My So Called Life. The show received great reviews, but did not last very long.

After this first role, began to receive a lot of calls for new shows and movies. He would star in Cool and the Crazy, How to Make an American Quilt, and The Last of the High Kings. Leto continued to get roles and continued to further his career.  Leto’s first major role was in the Prefontaine, which pushed the young actor to his limits because he had to train to fit the role. He trained for 2 months running to get into Olympic athlete shape to really feel like he was the character he was portraying.

After landing a lot of other popular roles, Leto decided it was time to branch out a bit. He decided to form a rock band, which he called Thirty Seconds to Mars. Leto and his brother, Shannon, decided it would be best not to use Leto’s fame to promote the band, because they wanted to know that they got where they did on their own. They would eventually go on to release their first album after years of Leto writing all of the songs. Their first album was received very well by fans, and the band was soon wanted all around the world.

While he was on the road touring with his band and writing songs for future albums, Leto continued his acting career. He got many big roles in big name movies including Fight Club, American Psycho, Requiem for a Dream, and Highway. Leto showed everyone that he was able to balance all of these aspects of his life at a very high level. Leto continued to balance acting and music as they were his passions. He continued to win awards and even received a platinum album.

Jared Leto has always had a soft spot for children. During his time as an actor and musician, Leto volunteered for multiple organizations, including Art of Elysium which helped children with chronic illnesses. Leto felt very passionate after Haiti was affected by an earthquake in 2010. He went to the island and took pictures and helped as much as he could. With all of his knowledge and photographs, he released a book in which a portion of the profits went to help rebuild the destroyed island. Leto was eventually named the global ambassador for the World Wide Fund for Nature. 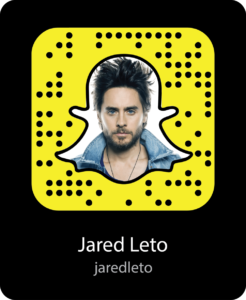 This is the only place you can find the official snapchat for Jared Leto. Be careful, as many people try to trick others by creating fake profiles for these celebrities, so be sure you are interacting with the proper fan page.

With over 9 million followers across his social media, Jared Leto enjoys doing as much as he can for his fans. If you want to see the latest updates on the actor, I definitely recommend checking out his snapchat story and his twitter. He updates these most often. On his snapchat, you can find all the behind the scenes stuff that goes on with putting on concerts, and what it looks like behind the stage at a Hollywood production. If you are a fan of his work, definitely give all of his social media outlets a look, as you can find a lot of cool information out about him that you might not have guessed!

Jared Leto Webstie – You can find his official website at – http://www.jaredleto.com/

Jared Leto Facebook – You can find the official fan page for Jared Leto at – https://www.facebook.com/jaredleto/