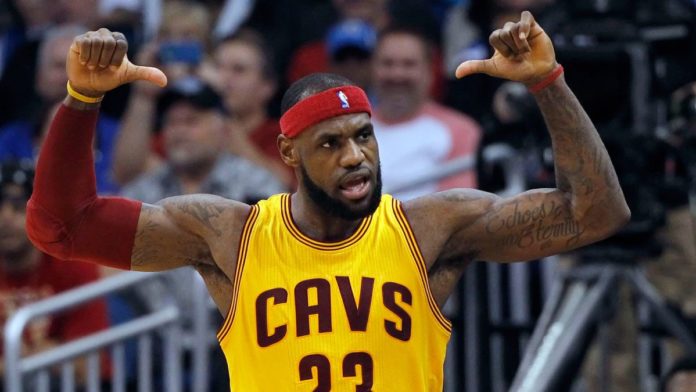 There are a lot of people out there who consider LeBron James to be one of the greatest basketball players of all time. His accomplishments and accolades are many. Over the years, he has seen prolific success with both the Miami Heat and the Cleveland Cavaliers. LeBron James was born in Akron, Ohio on December 30th, 1984. Although he may be one of the most popular basketball players in the entire world, he still regularly uses social media as a way to connect with some of his many fans.

LeBron’s childhood wasn’t the most stable, at first. He was raised by a single mother, and financial difficulties made it to where they frequently moved from place to place in Akron. Deciding that the home environment wasn’t safe enough for James, she allowed him to move in with a local youth football coach, who introduced LeBron to basketball to begin with. He played for the Northeast Ohio Shooting Stars with the Amateur Athletic Union, and he would eventually go on to play basketball in high school for St. Vincent – St. Mary High School. James was able to nab a varsity spot on the team in his freshman year, and he helped his team win a Division III state title in that very same year. Although he was young, he was proving himself to be a real force on the court. 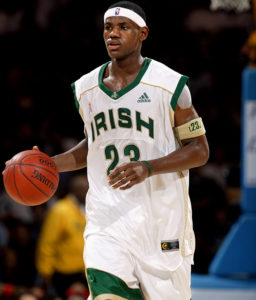 During his high school career, James was subject to a lot of media attention. Although the attention was definitely distracting for the young basketball player, it also put him in it spotlight really early on. By his senior year, some of his games were being nationally televised. Without a doubt, he was one of the most hyped high school basketball players that the modern era had ever seen. Due to a couple of snafus involving all-star high school basketball games, James lost his NCAA eligibility. This would be devastating to a lot of high school athletes, but since he was already sort of a basketball star, he was able to walk away from this without much of an issue. He graduated high school in 2003. He was drafted by the Cleveland Cavaliers with the first overall pick of the 2003 NBA Draft in that same year.

James began his career in Cleveland, and an impressive rookie season led to him being named Rookie of the Year. Although he had a solid first year, he wouldn’t see himself rise to stardom until a couple of years down the road, when his dominant play would become even harder to miss. In 2006, he just barely missed being named NBA’s Most Valuable Player. It’s worth noting that LeBron’s play didn’t just elevate himself, individually. It also allowed his team to reach entirely new heights. With his help, the Cleveland Cavaliers were able to make it to the playoffs, a feat that they hadn’t accomplished for a very long time without James. LeBron was eventually even capable of bringing the Cavaliers to the NBA Finals. For his stellar work in the 2008-09 season, he was named the league’s most valuable player. 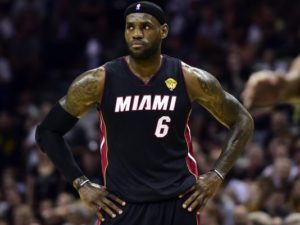 LeBron joined the Miami Heat in 2010 following some poor post-season play with Cleveland, which was considered a controversial play by fans and sports journalists alike. Jerseys were burned across the state of Ohio. Joining the other dominant players in Miami, LeBron was able to win back-to-back championships in 2012 and 2013. James became an unrestricted free agent in 2014, however, when he opted out of his contract with the Miami Heat. He would end up returning to Cleveland, where he has remained ever since. James joined Kyrie Irving and Kevin Love to form a highly competent star trio, and he helped the team win the 2016 NBA Finals. His success across these different teams, over such a long period of time, have led many to say that he is the greatest man to ever play the game. 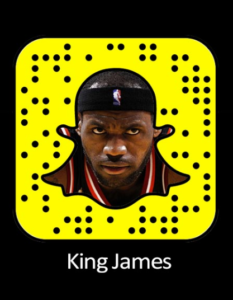 If you want to add LeBron on Snapchat, then you can just use your app to scan the snapcode that is listed above. Otherwise, you can add him by clicking the link right here.

Are you interested in checking out LeBron James’s official, verified, public Facebook account? If so, then you can just look him up under the username @LeBron. You can also take a look by clicking the link here.

LeBron James has over 30 million followers on Twitter. If you aren’t any of those 30 million people, then you should be able to follow him by searching for him under the username @KingJames. Alternatively, click the link here to check out what he shares with his followers.

Unfortunately, LeBron James doesn’t have a Kik username or code that is publicly available at this time. Considering his popularity, I guess it makes sense that he wouldn’t have a direct line between himself and all of his fans. Still, if you’ve met anyone on Kik claiming to be LeBron James, then they’re probably not being truthful with you.