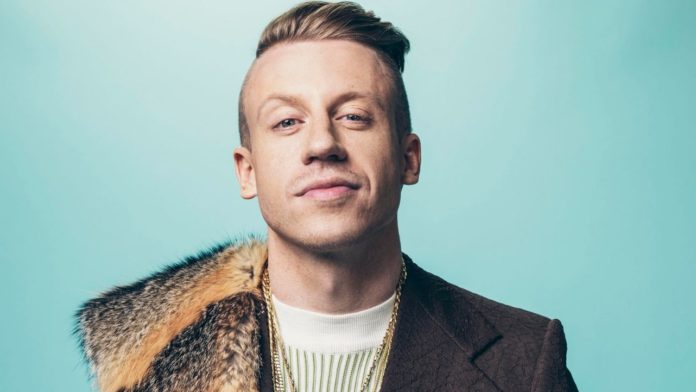 Benjamin Hammond Haggerty, or better known by his stage name, Macklemore, is known for being an American hip hop artist. Born on June 19th 1983, Macklemore came from a small town in Washington State. Growing up, he was drawn towards rap. He would go into music stores and listen to it for hours because his parents wouldn’t let him purchase it. When he was fifteen, he started his musical journey by writing his first song. He has said his musical influences are Wu Tang Clan, Nas, and Aceyalone. His journey from his small town in Washington State was successful as Macklemore is now a worldwide hit and continuously goes on tour all around the world and inspires people everywhere he goes.

How Did Macklemore Get Famous?

Macklemore started his passion for music young. During his years at high school, he started a small group where they would rap for each other and give each other pointers. Although this didn’t go anywhere, he felt it was good practice if he wanted to continue his career and become a professional. In 2000, his senior year of high school, Macklemore released his first EP, Open Your Eyes. Though this album was very small and was distributed amongst his fellow students at his high school, it still gave him something to take pride in.

After continuing to work on his music, Macklemore met Ryan Lewis in 2006 shortly after the release of his first full length album, The Language of My World. At first, Ryan Lewis was simply his photographer, but the pair would become really close friends and Lewis would go on to start producing his music. One of his first performances was at Bumbershoot, which is a relatively large festival in Seattle. In 2009, he released The Unplanned Mixtape, which would gain him world wide popularity and a spot on the iTunes hip hop section.

In 2009, the duo went public as a duo and released their first album under the name Macklemore and Ryan Lewis. This album wasn’t the most popular at first, but one song in particular, which was a remix of the popular Red Hot Chili Peppers song Other side, was a huge hit. The duo would perform this in front of his first sold out venue of nearly 50,000 people. After this album was released, the pair would finally venture outside of their hometown and start their first multi city tour which sold out venues everywhere they went. He continued to perform at many smaller musical festivals as he found the atmosphere to be inspiring.

In 2012, their third album, The Heist, was released and it instantly climbed to the Billboard Hot 100 List with many popular songs including Same Love and White Walls. He was asked to perform at the Music Choice Awards and this was something that was very big to him. This sparked his first worldwide tour and it got him to see a lot of the world that he had never imagined himself going to, nevertheless selling out venues for.

2013 was a great year for Macklemore as he released the single, Thrift Shop, which zoomed to the top. This was the first song in many years to reach the number one spot on the Billboard Hot 100 list that wasn’t produced by a major record label.

Macklemore has been through a roller coaster of a life. In 2008, Macklemore admitted to having a drug addiction and checked himself into a rehab facility. He had the support of his fans who never left his side, constantly sending him positive messages and vibes. His sobriety lasted until 2011 in which he relapsed. He made the song Starting Over, to describe his experiences with relapsing and how it made him and his family feel.

Macklemore has always been very inspired by his surroundings. For example, Macklemore was a huge baseball fan growing up, and went to a ton of Seattle Mariners games. When the commentator for the Mariners died, Macklemore instantly made a song, My Oh My, which was an homage to the commentator and actually performed it at the stadium to more than 50,000 fans. He was awarded a custom made jersey by the sports team and felt as though he had a special bond to the Mariners and thee city in general.

In 2013, he became engaged to his girlfriend of seven years. He would soon tweet out that he was expecting a child, and with that announcement came a new song. This song, Growing Up, was a hit and fans felt a connection with the singer as he would always release songs with his personal events.

One of the most interesting things that Macklemore has done was in 2016. He was invited by Barack Obama to speak about the dangers of addiction. He talked about his own experience and how he overcame all of the negativity he received from others and how he coped with relapsing. He made it clear that he was always given support and that was one of the best things that helped him recover. 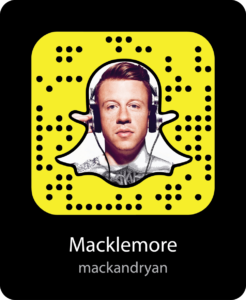 This is the only official snapchat of the artist, so be sure to check and make sure this is the one you’re following!

If you want all of the inside details of Macklemore, I definitely recommend checking out his snapchat and his Instagram. He constantly posts pictures of his daughter and updates his fans with information on where he’ll be at daily. He has proved that his fans are so dear to him by always keeping them in the loop with what is going on in his life. He currently has over 4 million followers and he thanks everyone of them everyday because without them, he wouldn’t be where he’s at.