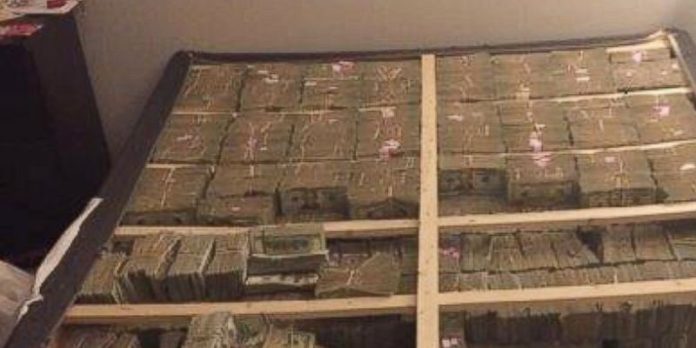 US authorities have seized what could be the biggest amount of money ever found under a mattress. Federal agents have found $20 million in cash under a mattress. The money is said to be from a pyramid scheme involving TelexFREE, which was disguised as an internet phone service company before it was shut down by authorities.

The money was found after investigators followed a Brazilian man, who is believed to be the person in charge of hiding the money. The company, which was founded in 2012, started in Brazil but was shut down there a year later. They were shut down after being accused of taking more than $1 billion from participants.

The photo of the $20 million hidden under the mattress were posted on Twitter by the US Attorney’s Office in Massachusetts. The money was found in an apartment that belongs to a Brazilian man, who was living in Westborough, Massachusetts. The man was arrested by authorities and is being held without a bail.

TelexFree was shut down in Brazil four years ago after complaints and accusations that the company had taken the money from participants. At the time, the company was said to have around 1.9 million participants, who spent money on them and were promised payouts for posting online ads.

In 2014, authorities raided the offices of TelexFree in Massachusetts as part of the investigation. Authorities have arrested some of the co-owners and top promoters but one is a fugitive for leaving the US shortly after the raid on the offices. The co-owner arrested, who recently plead guilty, is now facing jail time.

The money found under the bed is said to be tied to the TelexFree case, which began almost three years ago.