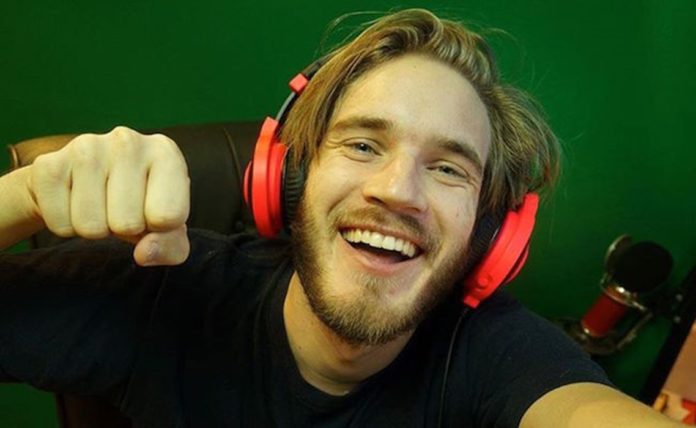 Objectively, PewDiePie is the most successful YouTuber of all time. He has over 52 million subscribers, and the only other user who comes even close to that currently sits at a little over 30 million. His success on YouTube has honestly changed the world, causing people to look at YouTubers as a whole, and YouTubing as a profession, in a completely different light. PewDiePie, also known as Felix Kjellberg, was born in Gothenburg, Sweden on October 24th, 1989. He has dominated YouTube since 2013, and his contributions to the internet world can’t be denied. 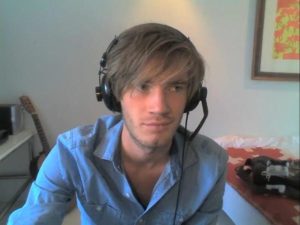 Felix grew up in a traditionally successful family. Both of his parents were chief executive officers in major companies, but he wasn’t as interested in that. He would spend a lot of his spare time playing video games, and it was something that he was very passionate about. However, he went on to attend Chalmers University of Technology, studying industrial economics. He wasn’t particularly happy doing the work, and by 2011, he had dropped out in order to further develop his YouTube channel. As you can imagine, people thought that he was absolutely crazy. In order to support himself while he began to work on a career in entertainment, he had to work at a hot dog stand. However, he would eventually see this risk pay off in a big way.

Early on, Felix’s channel was simple enough. Let’s Play channels, or channels that involve users playing through a video game and offering commentary, had already been around for a little while before he got into the scene. He primarily played action or horror games, and he would also frequently post vlogs to his channel, as well. Although this may not seem all that innovative of a concept, he was really one of the first YouTubers to try to get “big” in this particular field of videos. (At this time, YouTube was dominated by channels like nighahiga and Ray William Johnson. Not many gamers.) By July of 2012, he had reached 1 million subscribers. From there, his success would increase at an exponential rate. By 2013, he would become the most subscribed user on the platform. 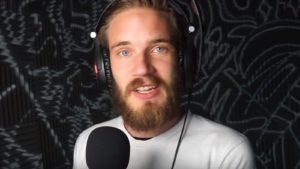 If you’re plugged in at all, you might have heard about the recent controversy involving Felix’s apparent desire to delete his YouTube channel. In early December of 2016, shortly before he was going to reach 50 million subscribers, he started to do a lot of things that made it seem like he was going to delete his account. He felt as if YouTube wasn’t supporting him in the way that they should, and he had long been disillusioned with where the website seemed to be going. His fans were shocked, and many believed that one of YouTube’s biggest stars taking such a drastic form of protest could actually make a change on the platform. When he hit 50 million subscribers, he posted a video of fireworks and announced that he would be deleting his account the next day.

However, when that time came around, he only ended up deleting a side channel that he had originally made as a joke. While many of Felix’s fans were relieved to hear that he wouldn’t be leaving YouTube, some viewed the entire ordeal as a publicity stunt. Others criticized his criticism of YouTube, saying that it seemed like he was just upset that his channel hadn’t been doing as well as normal. Felix, it’s worth noting, claims that the whole talk of deleting to begin with was a joke that just got out of hand. Either way, as long as he keeps making videos, I have a feeling that he’s going to continue to grab headlines in almost everything that he does. As the most popular user on such a massive platform, it only makes sense that he would attract so much attention.

Although it’s understandable if you don’t enjoy PewDiePie’s brand of comedy, you have to admit that he’s a pretty charitable guy. Due to his financial success, he has been able to make generous donations to a wide variety of different charitable organizations. Not only that, but he’s also used his platform as a popular YouTuber to encourage many of his fans to donate to these charities. Over the course of his career, he has donated to such organizations as the St. Jude Children’s Research Hospital, the World Wildlife Fund, Charity: Water, RED, Save the Children, and more. 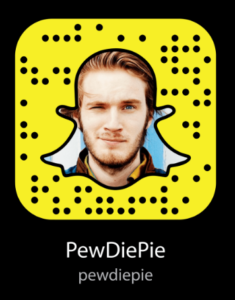 If you want to follow PewDiePie on Snapchat, then all you need to do is scan the snapcode displayed above. Otherwise, you can just click the link right here.

In order to follow PewDiePie on Twitter, then you can just look him up under the username @pewdiepie. To check his official Twitter page out for yourself, you can also just click the link here.

PewDiePie has over 11 million followers on Instagram. Just in case you don’t happen to be one of those 11 million people, then I’ll just tell you that his username is pewdiepie. Check his Instagram out by clicking the link here.

As of right now, it doesn’t seem like PewDiePie has a publicly available Kik account at this time. If you find someone on Kik claiming to be Felix, then it’s very likely that you’re being tricked.