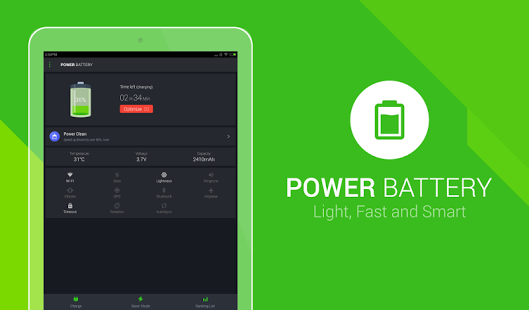 As we’ve gotten more and more apps on our smartphones, many of us have realized that our batteries simply can’t keep up. Worse yet, sometimes the batteries can overheat and cause plenty of technical issues. What can we do to help ease this burden? Paradoxically, we may be able to download an app to help our batteries last longer. Here, we take a look at Power Battery, made by LionMobi. 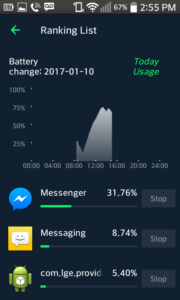 Before we get into the good and bad portions of this app, let’s first set a baseline on what we are working with. For the purposes of this App Review, I am using an LG L70 running on the standard Android Marshmallow OS. In recent months, the battery life has been a bit shortened, and the phone itself experiencing overheating as a result of high app use, among other factors. This has made it a prime testing candidate for an app such as the Power Battery by LionMobi. No phone use habits were changed for the purposes of this review, and thus it’s very much a “live in” test. Therefore, the results and following analysis are my experience, and yours may differ slightly depending on your conditions should you download this app. 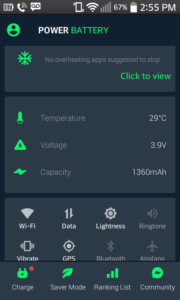 When opening up the app, you are greeted with a set of panels that display information including temperature and voltage data, which settings are enabled, and a bottom menu of other expanded features. Also included is the occasional ad panel (which is typically clearly different from the rest of the app) and the ability to load in another add if you scroll down too far. This makes for an easy to navigate system and a clean appearance that isn’t terribly intrusive. While the scroll down for a full page ad (which sometimes does play audio) isn’t my cup of tea, it’s certainly better than the pop-up ad approach right before you press to change an option. The graphs also allow for easy interpretation of usage data, as do the app battery use estimations (though other estimations will be mentioned later). Furthermore, interface navigation is made easy both in app, and through the creation of three separate buttons for app function on the home page of your phone. These means that you don’t need to scroll through options, and instead just hit exactly what you were looking for. 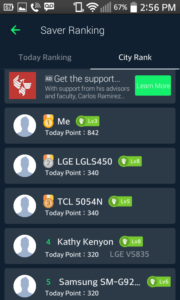 One of the biggest concerns for those with a draining battery is the threat of overheating. To combat this, LionMobi has included not only a thermometer function into the Power Battery App, but also have a few optimization tools that ensure the phone keeps within a safe operational temperature. Focusing on cutting out redundant functions and apps that hog power, using the cooling can drop your phone by a few degrees Celsius in no time (in my case, from 33C to 29C in under a minute). While this doesn’t work as well while charging, this can prevent your phone from overheating in a pocket, a problem I’ve personally run into a few times.

Alongside the cooling features of the phone, there are also several “save” functions, that include a catchall that shuts all but the essential functions of your phone down, as well as time-dynamic and custom options. These all allow for a longer lasting battery and when combined with the easy to use interface, makes what some people may view as a complicated task as easy as a single tap. To encourage this sort of action, LionMobi also has a social and community function set. These aren’t exactly needed, but are quite a bit of fun. One such function is where the amount of energy saved is converted into potential carbon emissions, and your phone is ranked against others in your area to see who is the greenest. This not only brings a bit of quite pride into the equation, it also sheds light on a factor I hadn’t considered in using an app like Battery Save, the more power-sipping as opposed to power-guzzling our phones our, the less we impact the environment, even if it’s merely milligrams of carbon in difference per person.

Really, this should come as no surprise as an issue and honestly if this is as bad as it gets we’ve got a pretty good app on our hands. When charging a phone, it is best to turn off as many apps as possible to reduce overheating and charge time. This is of course also true for the Power Battery app. While using the optimize function is great just before a charge, disabling the app just before charging may lend it to a faster charging time than what the estimate calculates if left on. Furthermore, less energy will be used by what replaces the main lock screen (which in and of itself is a cool little menu feature). Will it save you hours by turning off the app? Probably not. But a few minutes here and there certainly can add up.

We’ve all heard the saying that “There are lies, darn lies, and statistics”, right? Well, I’d petition we add estimations in there somewhere, as unfortunately, these can be hard to drill down to exact figures. On the homepage of the app, you are given an estimation which appears to be an average calculation based off how long the battery would last on constant use. This can make for interesting results. For example, I am while writing this glancing at my phone with 72% battery (in my experience, enough to run about 8 hours in good circumstances). However, instead of being within that estimate or lower, I am seeing an estimate of nearly double that for battery life, primarily due to an estimate of 45 hours on standby mode. The other estimates (5 hours on WiFi, or just under 3 hours with Video Call Mode) sound much more reasonable.

For this reason, I believe this feature should be altered with an over/under estimate the user can set with a quick check screen. For example, given that I always use WiFi for my phone, and go between Audio Mode and GPS Mode, being able to get an estimate based off the average estimate of these would be of greater use to me than the optimistic 16 hour battery life estimate. All in all, this is a handy little feature still and as long as you don’t base anything crucially important (like having enough battery power for your entire trans-continental flight) off these estimations it’s nice to have in the app.

All things considered this is definitely one of the best apps on the market. With plenty of features, a good layout, and an obvious dedication to creating a quality product, I would recommend giving the app a go for yourself. I will certainly be keeping it on my phone as it did lengthen overall battery life pretty significantly. It’s one of the few free, non-commerce apps that may end up saving you a few extra bucks in 2017, whether in the way of slightly lower power bills, or pocketing the cost of an overheated phone. In a scale out of 10, I would give Power Battery a solid 9.