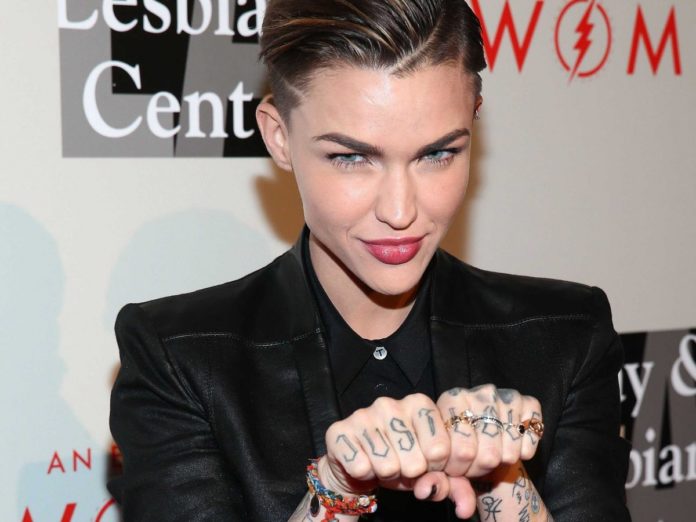 Although Ruby Rose has been modeling for years, she has only just recently become a popular mainstream figure through her work in television and film. Ruby Rose, also known as Ruby Rose Langenheim, was born in Melbourne, Australia on March 20th, 1986. A multi-talented wonder, Ruby has developed a strong following in the LGBT community for being openly lesbian and genderfluid. She regularly uses her various social media accounts in order to connect with some of those fans. Ruby is very active on Twitter, Snapchat, Facebook, and Instagram, and she communicates with her fans through all of those platforms. 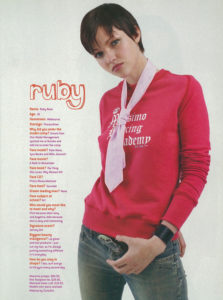 Ruby didn’t really get into the industry until 2002, when she joined the Girlfriend model search. Despite her best efforts, she ended up coming in second place to Catherine McNeil, who was just fourteen years old at the time. She wouldn’t get her next “big break” so to speak in modeling until 2010, when she worked alongside Milk and Honey (an Australian fashion label) to design a fashion line. The fashion line was meant to embody her own unique personal style, and it features everything from washed jeans to leather jackets. Now, I know what you’re thinking. Not just anybody is able to get their own fashion line. What did Ruby Rose do before then to obtain recognition? Ruby competed in a three-week national search to become an MTV VJ, and she was able to land the gig.

Although I would say that she was just as successful in modeling, Rose has gone on to say that she prefers entertainment over modeling, since it’s a lot less superficial. As a television personality, Ruby really came into her own. She appeared as a guest judge on shows like Australia’s Next Top Model. She also worked as a talk show host for The 7pm Project for a period of time, before she moved to work on some other projects. Like many models, Ruby Rose seemed to have a slight interest in acting. In 2008, she performed in the Australian comedy Suite for Fleur. However, that was kind of a minor gig. In the years to come, she would serious develop her acting career. 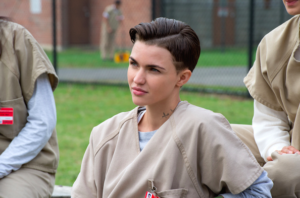 I think it could be argued that Ruby Rose’s mainstream acting career really began in 2013, when she appeared in the Australian drama Around the Block. She performed alongside the likes of Christina Ricci and Hunter Page-Lochard, and the film itself received mixed reviews. Ruby wouldn’t see any major success in acting, though, until 2014, upon the release of her short film Break Free. She produced Break Free entirely on her own, and she has said that working on the film allowed her to explore her abilities within the craft in a very meaningful and significant way. All of Ruby’s hard work would pay off in 2015, when she obtained a major role in the hit Netflix original series Orange Is The New Black. Her performance in this show, as Stella Carlin, would thrust her directly into the mainstream spotlight. She received a lot of the attention for this role.

Over the course of the next couple of years, Ruby Rose’s acting career will grow in some very major ways. She is set to have a major role in the franchise film Resident Evil: The Final Chapter, which will be releasing in the United States in late January. Ruby will also be a main cast member in the movie XXX: Return of Xander Cage, which is similarly set for a January release. She is set to have a major role in the highly anticipated sequel John Wick: Chapter 2, which is going to be releasing in February of 2017. Looking more to the future, in 2018 she will work alongside Jason Statham in the American horror film Meg, which is about a deep sea mission terrorized by a white shark. Needless to say, Ruby Rose’s plate is very full right now. Whether she’s working on the big screen, on the smaller screen, or with a high fashion label, Ruby is leaving her distinct and unique mark all over the entertainment industry. 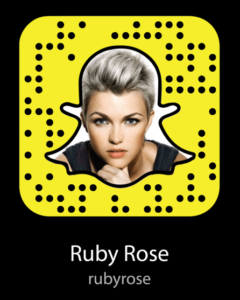 If you want to follow Ruby Rose on Snapchat, then you can do so by using the app and scanning the snapcode that I’ve included above. Alternatively, you can look her up under her username @rubyrose or just click the link that I’ve included right here.

Do you want to take a look at Ruby’s official, verified, public Facebook page? You can find the page by searching for it under @RubyRose, or by clicking this handy little link right here.

Ruby Rose has a very strong presence, and you can follow her by searching for her under the Twitter handle @RubyRose. Feel free to check out what she shares with her followers by clicking the link here.

Considering her work as a model, it isn’t all that surprising that Ruby Rose has such a huge following on Instagram. If you want to join that following, then I suggest that you check her out under her official username, @rubyrose. Take a look at her account by clicking the link here.

As it turns out, Rose doesn’t actually have a Kik account. If she does have one, then she hasn’t made the decision to publicly release that information to her fans. If you have met someone on Kik who claims to be Ruby Rose, then I would take their claims with a healthy grain of salt.