Victoria’s Secret is an American designer, market, and manufacturer of women’s beauty products including lingerie, underwear, bras, and other products. Victoria’s Secret was started by Roy Raymond on June 12th, 1977. Raymond was inspired to open up the store after feeling embarrassed buying lingerie for his wife. He thought men and women needed a place that they could go to in order to shop for these items without feeling embarrassed or ashamed. It all started out with a loan he took out from the bank for $40,000 and another $40,000 loan from his parents. After being opened for a year, Victoria’s Secret was clearly a winner, earning more than $500,000 in its first year. After the initial success, Raymond started a mail order catalog and opened three more stores with his profits. Eventually, Victoria’s Secret would be sold to another founder for $1 million dollars. Soon after, it would be turned into one of the largest lingerie retailers, topping a $1 billion dollar net worth.

Victoria’s Secret all started with a man who felt embarrassed getting lingerie for his wife in a shopping center. This man would go on to take out a loan from a bank and an additional loan from his parents in order to start a lingerie store in which men and women can both feel comfortable shopping in. The name, Victoria’s Secret, came from his fascination with the Victorian Era, and the secret of what people wear underneath their clothes.

After its first year of business, Victoria’s Secret was a huge success. The business grossed over $500,000 during its first year. Raymond saw the success of his store and immediately opened up three new stores a mail order catalogue. All of his stores started out in California, more specifically, the San Francisco area.

Despite its initial success, Raymond was headed towards bankruptcy. Raymond was targeting males to sell his lingerie to. This was clearly not making the business profitable. In 1982, Raymond sold his 6 store and 40 page catalogue business to Leslie Wexner, the creater of Limited Stores Inc for $1 million. Leslie saw that his business had a ton of potential, but needed a marketing adjustment. Leslie would change the marketing strategy to target women instead of male shoppers. He promised new styles, colors and patterns, than ever before seen in women’s underwear. The strategy worked, and Leslie became the owner of one of the most successful chain clothing stores in America.

Nowadays, Victoria’s Secret has more than 1,000 stores across the United States and is estimated to be one third of all purchased in the intimate apparel style of clothing. Victoria’s Secret went through a small period where they were lagging behind and sales started to decline, but that was quickly shut down when the company rebranded itself to be a bit classier. Victoria’s Secret continues to thrive by hosting one of the biggest fashion shows in the world and hosting some of the most beautiful women in the world at their headquarters.

Victoria’s Secret had some very shocking controversies during its time of growth. In 2009, Victoria’s Secret was sued by multiple different clients, claiming that their underwear had contained formaldehyde which caused awful rashes on the women who wore them. The case would soon be dropped, as many of the clients had refused to submit to a patch test to test the nature of the rash. The scientists also determined that formaldehyde quickly disappears in air, water, and sunlight, which would not be consistent with what the victims were claiming.

Another shocking controversy appeared in 2012 when the company was accused of violating child labor laws. It was never found out whether or not the company was guilty, but some claim that the company settled out of court in order to keep the news out of the media. 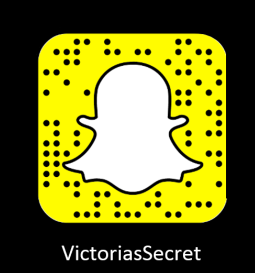 This snapchat is the official snapchat of Victoria’s Secret. Here you can find all kinds of behind the scenes action on their fashion shows, latest creations, and even some deals! I definitely recommend adding them as they hold multiple giveaways through their snapchat and other social media accounts. This is definitely a person you want on your snapchat during the fashion show, as you will see things you just don’t see on the TV.

I definitely recommend checking out all of the social media accounts related to Victoria’s Secret. They hold multiple giveaways and have a following of more than 50 million followers. If you want to be kept up to date on all of the latest sales, you definitely want to follow them. They also feature their newest products, coupons, and many other great things fashion related. Their social media accounts are especially active during the Victoria’s Secret fashion show, which is a great time to add their snapchat to see all of the behind the scenes action!

Also be sure to check out Pink, Victoria’s Secret sister clothing line. You can find their social media pages below.