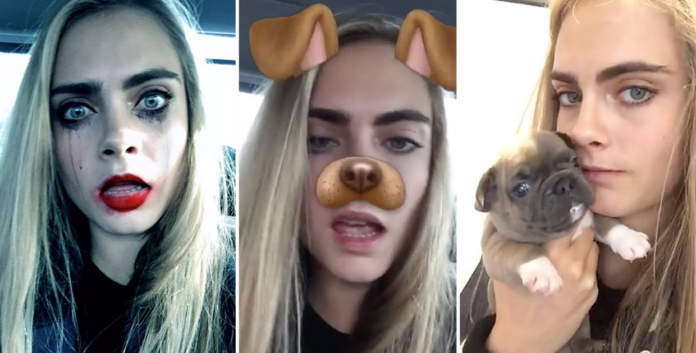 Before Cara Delevingne got famous in America with her part in the John Green movie Paper Towns as the love interest, Margo Roth Speigelman, she was a fashion model in England.

How Cara Delevingne Got Famous 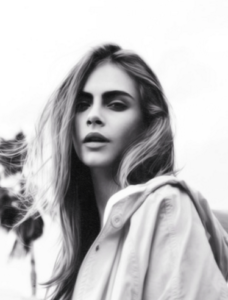 Cara was born in Hammersmith, London on August 12, 1992. She came from a wealthy family. Her older sister Poppy is also a model. Cara is the goddaughter of Joan Collins, an actress who appeared in a popular soap opera called Dynasty. Cara Delevingne got into modeling at the early age of ten. In the meantime, she went to fancy schools such as the Francis Holland School for Girls, and Bedales School in Hampshire where she majored in music and drama. She decided not to continue with school, opting instead to go into modeling full time.
Cara Delevingne became a famous model when she was cast in Burberry’s spring/summer campaign in 2011. This gig got her onto the catwalk at London’s Fashion Week, and later at New York’s Fashion Week in 2012. Her modeling career took her all over the fashion scene, and she was doing shows in Milan and Paris. She continued modeling until 2015, when she ended her contract in order to put more energy into her acting career.

Before appearing in Paper Towns and Suicide Squad, Cara Delevingne acted in Anna Kerina, an episode of Playhouse Presents, The Face of an Angel, as well as the Taylor Swift’s music video for Bad Blood. She also voice acted in Grand Theft Auto V as the radio DJ. She has a few interesting roles coming up in pieces such as a period romance called Tulip Fever, and a British movie called Kids in Love. 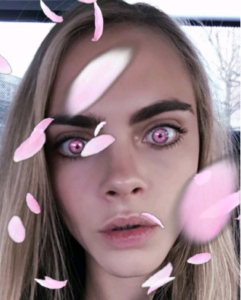 Cara has earned many awards for both her acting and her modeling, including the Model of the Year in 2012 and 2014 in the British Fashion Awards. She won a bunch of awards for her part as the love interest Margo Roth Spegielman in Paper Towns, such as Breakthrough Actress Elle Style Awards and Choice Summer Movie Star: Female in the 2015 Teen Choice Awards. In 2016, she got the Choice Movie Actress: AnTEENcipated for her role as the Enchantress in the Suicide Squad.

Cara has had a number of high-profile relationships with both men and women. She briefly dated young country star Jake Bugg in 2013. Since then, she was rumored to have had connected to Rita Orr, Prince Harry, Leonardo Dicaprio, and Harry Styles. Cara Delevingne and Michelle Rodriguez were an item in early 2014, and when it ended soon afterwards, Cara moved on to Sienna Miller. Later on in 2014, Cara was rumored to have dated Jack O’Connel from Unbroken for about a month. Cara’s longest and most famous relationship was with singer Annie Clark. That relationship ended in the fall of 2016. 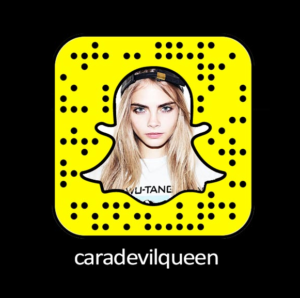 Want to add Cara Delevingne to your Snapchat feed? Just click here.
Cara posts often on Snapchat, and it looks like she loves to try out the different Snapchat filters.

You can find Cara Delevingne on her official FaceBook page at CaraDelevingneOfficialPage, or by clicking here. Her page has 5,914,891 followers. Cara’s most recent posts are about her recent partnership with Rimmel, as well as her trip to Uganda to visit refugee settlements and promote education in that area. Her cover photo is not exactly work safe, so exercise caution if you are reading this article on the job if your boss is not a fan of artistic nudity.

You can find Cara Delevingne on Instagram at caradelevingne, or by clicking here.

What is Cara Delevingne’s Kik Username or Code?

It does not look like Cara Delevingne has a kik, or at least not a public one.

Check out Cara Delevingne’s Twitter page here, or by her username caradelevingne.

Cara Delevingne is on YouTube under the username caradele. You can access the page by clicking here. She posts playlists for videos she liked, or music that she enjoys. There are 4 uploaded videos, and the latest one is from 2 years ago. That video shows Cara in a windy area apologizing to someone named Kevin for not being able to go to prom with him. You can find that video by clicking here.