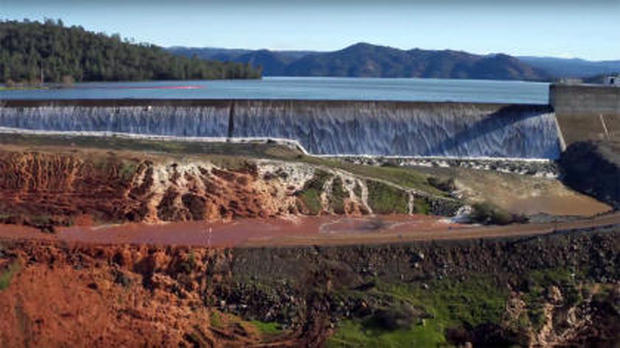 On Monday, emergency workers began to repair the damaged spillway, which led to the evacuation of nearly 200,000 people. It is the first time that the Lake Oroville Dam, opened in 1968, has water flowing over the emergency spillway.

Mass evacuation orders began yesterday but it was reported a few hours ago that water levels had dropped. The weather forecast does say rain in the area could continue on Thursday, Friday, Saturday, Sunday and Monday.

On Sunday, nearly 200,000 people were evacuated from areas below the dam. Authorities did not give people a date when they could return to their homes. Evacuation centers were opened for the people leaving the area. The state water resources announced on Sunday that the evacuation orders were not a drill. The Los Angeles Times reported just a few minutes ago that evacuations below the dam remain in effect as emergency staff try to make repairs before new storms.

The Lake Oroville Dam is about 75 miles north of Sacramento and about 25 miles southeast of Chico, a city where evacuation shelters were opened. Several news sites are now reporting that evacuations may not end until fixes are made to the dam. Emergency staff are now working to fix the spillway before more rain falls. The evacuation orders remain in effect for nearby areas.