What Happened to Topher Grace – 2018 Update 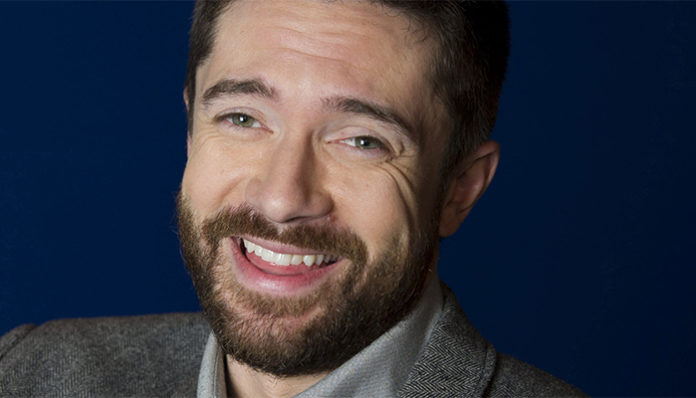 Born in New York City, American actor Topher Grace is most well known for playing Eric Forman in the sitcom, That ’70s Show. Raised in Connecticut, he started out his acting career while attending boarding school in New Hampshire; during that period, he participated in a number of musical productions including The Pirates of Penzance, and Joseph and the Amazing Technicolor Dreamcoat. Not only that, but Grace also directed a choose-your-own-adventure film with the help of a few classmates as a teen. Following his high school graduation, he attended the University of Southern California briefly before dropping out to focus his attention on an acting career. As fate would have it, the aspiring actor landed a major breakthrough role almost immediately in the Fox sitcom, That ’70s Show (1998). As it happened, the series’ creators, Terry and Bonnie Turner was sold on his acting after seeing him in one of his high school playsーas their daughter happened to attend the same school.

Despite having only had a year of college and some theatre experience with him, Grace rocked his role as Eric Forman in the sitcom. One of the most popular comedies on television at the time, it propelled the actor into newfound fame. For his portrayal of the character, he also received a handful of accolades including three Teen Choice Award nominations (e.g. Choice TV Actor, TV Breakout Performance) and a Young Artist Award nomination (e.g. Best Performance in a TV Series Young Ensemble). While he was on the show, Grace also guest starred in several other TV series such as Saturday Night Live (2005), and Stella (2005). On top of live action acting, he also lent his voice to characters in What’s New, Scooby Doo? (2002), King of the Hill (2003), Robot Chicken (2005), and The Simpsons (2008). A few years later, he received another break when he was cast in the Daytime Emmy Award-winning TV mini-series, The Beauty Inside (2012).

Aside from his work in television, the actor has also starred in sundry movies over the years. In 2000, he made his motion picture debut in the crime drama film, Traffic (2002), where he played as Seth Abrahams; the role later earned him a Young Hollywood Award for Breakthrough Performance the following year. After a few smaller roles on the big screen, he was cast as the male lead in the romantic comedy, Win a Date with Tad Hamilton! (2004), playing alongside Josh Duhamel and Kate Bosworth. For his stellar performance, he received three additional Teen Choice Award nominations. Since then, he has also appeared in Spider-Man 3 (2007), Take My Home Tonight (2011), The Big Wedding (2013), Playing it Cool (2014), and Interstellar (2014), among many others.

What has the New York native been busy with these months? Is he still taking on new roles in the recent years? Will he be starring in any upcoming films? What happened to Topher Grace? Where is he now in 2018? 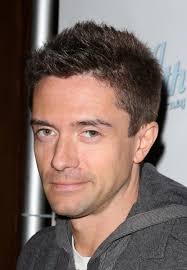 Born on July 12, 1978 in New York City, New York, Topher Grace (Birth name: Christopher John Grace) is the son of Pat, a schoolmaster assistant and John Grace, an executive at Madison Avanue; the oldest child in the family, he has a younger sister named Jenny. Growing up in Connecticut, Grace spent much of his youth playing sports; he is especially fond of tennis and soccer.

As a teen, he went to a New Hamsphire boarding schoolーit was there that he first tried his hand at acting. During his time in high school, he participated in a number of musicals such as Fiddler on the Roof, The Pirates of Penzance, and Joseph and the Amazing Technicolor Dreamcoat; he even played Pseudolus, the narrator in a production of A Funny Thing Happened on the Way to the Forum.

At one point, he even directed a choose-your-own-adventure film, with the help of a few classmates. After graduating from high school, he went to the University of Southern California however ultimately dropped out after a year to pursue a full-time acting career. Having always disliked being called Chris, he eventually changed his name to Topherーas it is today. With some luck, Grace landed a major breakthrough role in the Fox sitcom, That ’70s Show (1998) not long afterward. As it happened, the series’ creators Terry and Bonnie Turner, was sold on his acting after seeing him star in a high school play; coincidentally, their daughter had attended the same school. Apart from the experience that he gained through school plays and theatre camps, Grace had close to zero experience prior to being cast on the show. 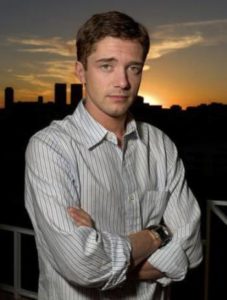 Co-created by the husband and wife team, Terry and Bonnie Turner, That ’70s Show depicted the lives of a group of teen friendsーincluding their coming of age and mishaps, in the fictional town of Point Place, Wisconsin. Cast as the show’s main protagonist, Grace portrayed the role of Eric Formanーa sixteen year old who is initially depicted as being a socially awkward teen.

Based loosely on the younger days of Mark Brazill, one of the series’ creators, the character is shown to have an obvious crush on his next door neighbour, Donna Pinciotti; the two eventually begin a relationship later in the series. After being introduced in the pilot episode, Eric appears for a total of 179 episodes prior to departing at the end of the seventh season. During the eighth and final season, he reappears briefly as a guest star.

In addition to Grace, That ’70s Show also starred Mila Kunis, Danny Masterson, Ashton Kutcher, Laura Prepon, Wilmer Valderrama, and Kurtwood Smith, among others. Consisting of 22-minute long episodes, the sitcom debuted on Fox on August 23, 1998. A consistent performer for the network, it proved to be immensely popular among the audience; during its first season, it drew in an average of over eleven million viewers. Although ratings eventually came down in the later years, it still maintained a fairly high viewership. Nominated for a staggering sixteen Primetime Emmy Awards, That ’70s Show also garnered Grace six consecutive Teen Choice Award nominations from 1999 to 2004, in addition to two Young Artist Award nominations. To date, it remains to be his most remembered performance on television. 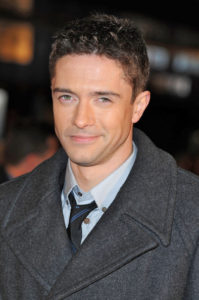 While he was still on the sitcom, Grace worked with director Robert Luketic in the romantic comedy, Win a Date with Tad Hamilton! (2004). His second major role on the big screen (his first being in that of Traffic in 2000), he was joined by Kate Bosworth, Josh Duhamel, Gary Cole, Ginnifer Goodwin, and Sean Hayes in the film.

Produced by Douglas Wick and Lucy Fisher, it followed a young woman named Rosalee Futch who lands herself a date with a male celebrity after winning a local competition; things are not as simple as they seem however, as a love triangle quickly forms between her, the star, and her best friend. Playing as the male lead, Grace took on the role of Pete Monashーa coworker who secretly harbours feelings for Rosalee.

Distributed by DreamWorks, Win a Date with Tad Hamilton hit the theatres in the United States on January 23, 2004. At the box office, it ranked third, having earned over $7 million during its opening weekend across 2700 screens. Despite its stellar cast, the film ended up being a financial failure as it only managed to gross a worldwide total of $21 million from a production budget of $22 million. In terms of critical reception, it garnered mostly mixed reviews; while some lauded its charming cast, others felt that the plot left something to be desired. Regardless, Grace’s role as the good-hearted Pete earned him three Teen Choice Award nominations, one of which he shared with his co-star, Kate Bosworth.

Three years later, Grace received another big break when he was cast as a supporting character in the popular superhero film, Spider-Man 3 (2007). The final instalment of the Spiderman trilogy, it centred around Peter Parker after a strange, black entity causes him great inner turmoil; to make matters even more complicated, he is faced with new villains in the city. While Tobey Maguire reprised his role as the web-shooting hero, Grace portrayed the role of Eddie Brockーa photographer who is later exposed by the former of creating fake photos of Spiderman. In the latter half of the film, he bonds with symbiotic, which causes him to turn into a monstrous being with spider-like powers. Other cast members include Kirsten Dunst, Thomas Haden Church, James Franco, Bryce Dallas Howard, and Rosemary Harris.

Filmed in the city of Los Angeles, Spider-Man 3 opened in theatres on May 4, 2007, after an initial premiere in Tokyo that April. Proving itself to be a huge blockbuster, it grossed over $104 million on the first day, and later went on to take in $381.7 by the end of its opening weekend. By the time it came off theatres, it had reaped in over $890 million worldwide, making it the third highest-earning movie of the year. For his convincing portrayal of the film’s antagonist, Grace was nominated for an MTV Movie Award for “Best Villain” in 2008.

Three years later, the actor was selected to star in the science fiction film, Predators (2010) alongside Alice Braga, Adrien Brody, and Walton Goggins. The third series of the Predator franchise, it revolved around a group of individuals, all of whom have been abducted and placed on an unknown planet where they are reserves for various tribes of extraterrestrial killers. One of the principal cast members, Grace played as Edwinーa doctor who is later revealed to be a psychopathic murderer later in the film. Produced on a budget of $40 million, Predators debuted in theatre screens on July 9, 2010. A major blockbuster, it grossed $10 million on the first day, and later pulled in a total of $24.7 million after its first weekend, putting it in third place at the US box office. Despite being a major commercial success, reactions to the film were generally mixed; for example, it currently holds a score of 51% on Metacritics from movie critics. 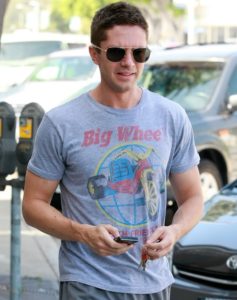 Grace has been busy filming for a handful of movies the past monthsーone of them being the independent horror thriller, Delirium (2017). Directed by Dennis Iliadis, it will follow a man recently released from a mental institute, after he inherits a mansion which he believes is haunted after witnessing a number of disturbing events. According to its IMDb page, Grace will be playing one of the lead roles, alongside Patricia Clarkson and Genesis Rodriguez.

Starring in yet another crime thriller, the actor will also be appearing in the modern noir film, Under the Silver Lake (2017), which is written and directed by David Robert Mitchell. Among the cast are also Andrew Garfield, Riley Keough, Summer Bishil and Jimmi Simpson.

If you’d like to stay up to date with the 38-year-old actor from New York, you can do so by following Topher Grace on social mediaーyou can find him on Twitter at @TopherGrace. While you’re at it, be sure to also drop by his official Facebook page at @TopherGrace.