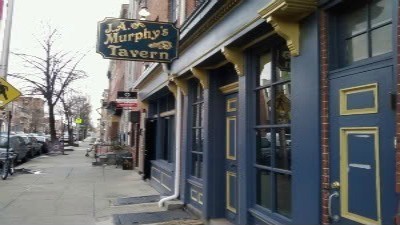 J.A. Murphy’s in Fells Point, Maryland, runs a risk of closing down the bar soon. In 2009, Joel and Keith decided to open a bar on a whim. Despite having no bar or restaurant experience, the two of them successfully launched their tavern by offering dirt-cheap drinks. The first happy hour offered $1.50 mixed drinks and shots; for the first year, the low prices worked, and locals flocked to the bar. J.A. Murphy’s was named “best happy hour,” and it raked in more than $12,000 in sales. Keith took over the daily bar operations, while Joel managed the books and staff. Their accidentally success was short-lived, and the model lead to a business based on excess, not profits. The dollar shots, which everyone loved, forced Keith and Joel to stick to it. A lot of people started binge drinking, and the two frat buddies became overwhelmed by the unruly clientele. To make things worse, Joel’s abrasive attitude divided his staff.

Jon Taffer’s daughter, Sam Taffer, has joined Jon in his pre-emptive stakeout of J.A. Murphy’s. Jon explains, this is a college bar, which is why he has brought Sam to help him. Jon pulls up pictures and reviews of the staff, which are all terrible – the bar smells, the drinks are cheap, but everyone has had a bad experience. Joel is actually the “J.A.” of J.A. Murphy’s, which stands for “jack-ass.” Sam walks into the 3,000 square foot space, with a congested front bar area with only one service station, a separate, unused dining room and a gaming area. Inside J.A. Murphy’s, Sam immediately notices how disgusting the bar is and the horrible smell. She asks for specials, and the only special is two-for-one shots. They have not had draft beer in over a month, so she orders a plain vodka and tonic after attempting to order a lemon vodka, which the bar does not have. 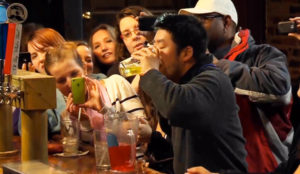 Sam also notices that the patron next to her ordered an “inception shot,” which is numerous shots inside each other inside a pitcher. If you finish the shot within 10 seconds, you get it for free, which is a horrible, nasty way to promote binge drinking. The patron sloppily chugs his shot as Jon watches from the car, and the customer downs the shot in 16 seconds. The patron is completely drunk, but the bartenders could not care less. Sam then orders the nachos with chicken and cheese, and Jon observes the cross-contamination as the chefs touch raw chicken and cooked product without washing her hands. In the car, Jon points out this is a huge red flag for cross-contamination, so he enters the bar to shut it down immediately. Sam eyes the nachos, but refuses to touch them.

Inside the bar, Jon immediately grabs Joel and Keith and heads back to the kitchen. Jon introduces himself to chef Tammy, and points out that Tammy picks up raw chicken and cheese with her bare hand, then picked up spices and crab with her bare hand. Jon is irate and unleashes his wrath on Joel and Keith, who use the excuse that they simply didn’t see it. The two owners could not care less, and Jon demands that all the food be thrown away and the kitchen shut down so nobody else can get sick. Keith, Joel and Tammy comply and shut down the kitchen, but Joel and Keith mock Jon behind his back. The bar is shut down for the night, and Jon leaves for the night.

The next day, Jon introduces himself to the bar staff. The bar staff is responsible for getting people sick, and he refuses to help people who do that. To make things worse, Joel and Keith are negligent about the processes of the kitchen and that should infuriate the two. However, Keith owns up to it and admits that he is being negligent; Jon then asks who trained Tammy, and Joel takes responsibility for Tammy’s training. Jon places the blame on Tammy, and one of the bartenders explains that J.A. Murphy’s lost two of their head bartenders to an employee who left the horrible working environment and opened her own bar. Jon asks for the employees’ opinions, and another bartender explains that he has heard numerous customers complain about Joel. Jon also points out the inception shot – if they sell another drink, they are begging to lose their liquor license. An inception shot contains 5 ounces of alcohol, which is more than 3 times a standard shot consumed in 10 seconds. This is more than enough to spike a patron’s blood-alcohol level over the legal limit in a minute.

Jon calls in his experts; flair mixologist Chris Cardone enters the bar and looks behind the bar. The first thing Chris points out is the stickiness of the soda gun, which is perfect for fruit flies to enter and lay eggs. The draft beer is sticky and the beer is warm, foamy, and nasty. The shot glasses are also dirty and not cleaned, and the entire bar is filled with a layer of foam and filth. The bar is a disaster, and it’s the employees’ fault. There are actually maggots underneath the bar mats, and Chris is repulsed. The bartenders explain there are no cleaning products and they actually offer their own money for cleaning products. Chris pulls out a jug of cleaning liquid, and the bartenders play dumb. 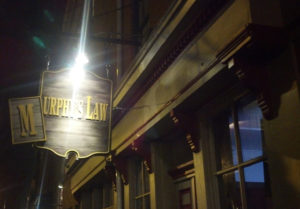 Jon brings in Chef Brian Duffy, who is a renowned Irish chef. Chef Brian enters the kitchen and assesses the current state of the kitchen, asking Tammy what works and does not work. The freezer does not work, so Joel and Keith decided to unplug it and leave it sit. Tammy has to put frozen food inside a refrigerator, which means that it quickly goes bad. Chef Brian’s biggest concern is the mouse poop inside containers in the kitchen. He feels that J.A. Murphy’s is the most disgusting bar, and Brian calls in Jon. Brian shows Jon the mouse droppings all over the kitchen, and the grease that builds up inside the hood drips off his fingers.

To make matters worse, Jon’s interior designer reveals that one of the wooden beams underneath the restaurant is rotting. Jon immediately vacates the bar, and the renovation is pushed back until who-knows. A renovation team comes in and looks over the structural damage, determining if the bar is salvageable. Jon has to take all the staff to an outside facility to do some training, and even takes Joel and Keith to Marka’s bar, the employee who left J.A. Murphy’s to open her own bar. In the meeting, Jon encourages Joel and Keith to treat his employees better as Marka is just one example of how tensions are building in the bar. Joel actually apologizes to her.

Fortunately, J.A. Murphy’s structural damage is salvaged and the bar is now safe to re-enter. The bar had been remodeled successfully, but to little avail – J.A. Murphy’s actually closed before the episode of Bar Rescue ever aired. Jon Taffer even changed the name from J.A. Murphy’s to “Murphy’s Law,” encouraging the employees to laugh at their past mistakes. However, it did have a stellar 4.5 star review on Yelp, with reviewers raving about the cheap liquor and even cheaper menu. The bar closed down in 2012 just two months before the episode ever aired, which can be attributed to the lackadaisical nature of owners Joel and Keith. J.A. Murphy’s had closed and been sold to a new owner.