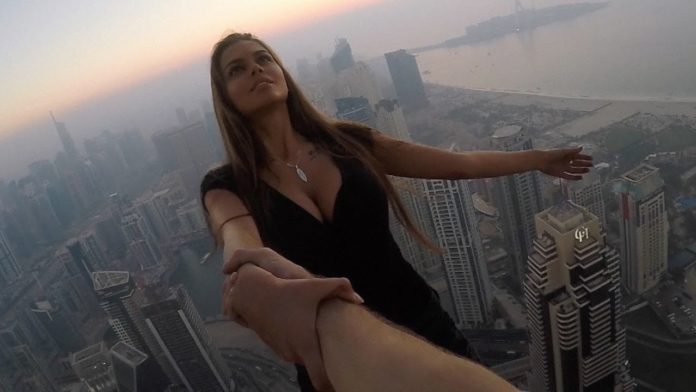 A Russian model has been criticized on social media after risking her life in a photoshoot that took place at a Dubai skyscraper. Viki Odintcova appears to have no equipment as she leans out from the structure. A male assistant is seen holding her by the hand while she leans out and climbs down for the photoshoot. The videos and pictures of her risky photoshoot were posted on her Instagram account.

The model appears to have completed the photoshoot without any problems but her Instagram followers were not impressed by the risky photoshoot. One of her photoshoot videos on Instragram has over one million views and nearly 2,500 comments. Some of the comments were from unimpressed fans, who couldn’t believe she had risked her life for the photoshoot.

One comment mentioned that if he was her parent he would smack both of them and the guy with the beard. The video posted by her on Instagram shows her climbing down while holding the male’s assistants hand. Other comments mentioned that this was a very bad example for the youth.

The photoshoot took place at the Cayan Tower, which is a 73-story skyscraper in Dubai. The residential tower opened less than four years ago is more than 1,000 ft tall.

This isn’t the first time that a risky photoshoot is criticized on social media but this has got to be one of the riskiest in 2017 so far.  Viki Odintcova has over three million followers on Instagram but some of her fans are not happy about her latest photoshoot, which is probably one of the riskiest she has ever done.