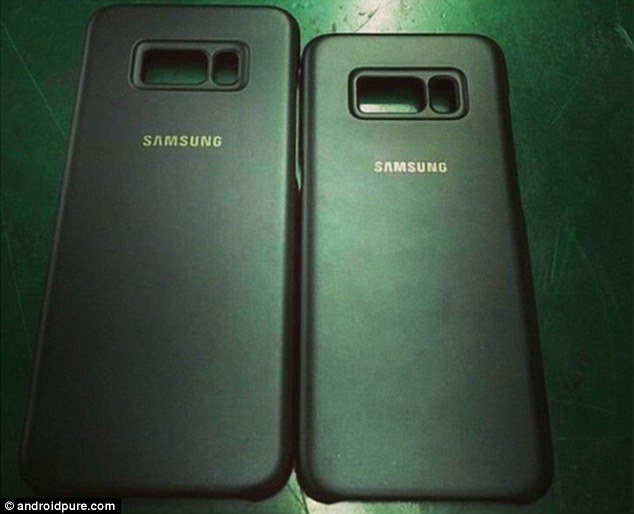 The Samsung Galaxy S8 will not be debuting at MWC (2017) but the release date is rumored to be very close. The upcoming flagship phone has been mentioned in many rumors in recent months and now, there is more information on how the device will look like once it’s unveiled.

A picture of the company’s official cases has now appeared online, letting us know the back of the phone will look like. The leather cases show that there will be a section for the fingerprint scanner on the back. The other section appears to be for the camera. The fingerprint scanner on the back could be confirming recent rumors that the phone will have no home button and that the front will be all screen.

The images, which come from AndroidPure, come just weeks after a report revealed that the phone would be unveiled on March 29. The phone was previously rumored to be making an appearance at MWC (2017) but it was later confirmed that it would not be unveiled in the tech show. Samsung sent press invites for the tech show just a few days ago and it is rumored that the company will be unveiling a new tablet.

Last month, a picture of the Samsung Galaxy S8 surfaced online. The image, which was revealed by Venture Beat, showed one of the two rumored versions of the Galaxy S8. The phone shows no home button on the front and a fingerprint scanner next to the camera on the back.

The Samsung Galaxy S7 made an appearance during MWC (2017) and was released the following month. It will be the company’s first flagship release since the recall and discontinuation of the Galaxy Note 7, which cost the company billions of dollars.

Samsung has not revealed a release date for the Galaxy S8 but the recent report mentions that the phone will be unveiled next month.

What do you think about the recent Galaxy S8 rumors? Let us know in the comments.