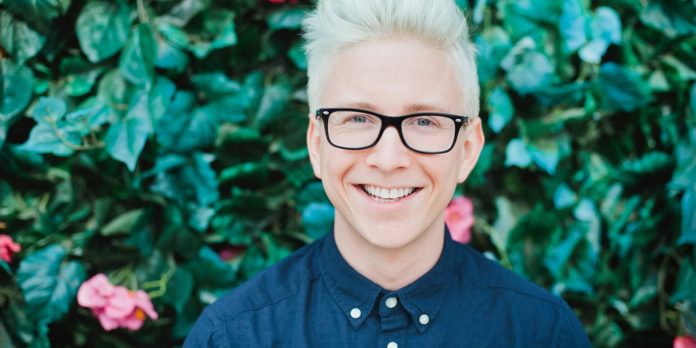 Without question, Tyler Oakley is one of the most popular YouTube stars out there. He has made quite the name for himself as a vlogger, where he has amassed a cult following. His success on YouTube has allowed him to branch out into other forms of entertainment, including television. Tyler Oakley, also known as Matthew Tyler Oakley, was born in Jackson, Michigan on March 22nd, 1989. He has only been producing videos on YouTube since about 2007, but since then he has proved himself to be a marketable and popular personality. Tyler regularly interacts with his many fans on a variety of different social networking platforms, including Snapchat, Facebook, Instagram, and Tumblr.

Tyler was born in Jackson, Michigan as a part of a very large family. He has 12 siblings in total, and his parents divorced when he was just a baby. Oakley was drawn to entertainment at a young age, participating in choir and drama when he was in middle school. Once he graduated high school, he attended Michigan State University where he was looking to study communication. It was at Michigan State University that Tyler would first “meet” YouTube, which he initially used to communicate with his friends from high school. For those of you who may not have used the website back then, it wasn’t always used as a place for people to get famous. A lot of people like Tyler were originally looking to use it to share videos with friends. 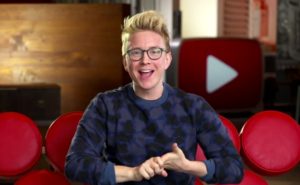 Oakley apparently saw the potential of YouTube as a real platform for entertainment, however. He would eventually become a part of the collaboration channel 5AwesomeGays. Although this channel isn’t really active today, it served as a strong foundation for Tyler’s later career. Within a few years, he was one of the most popular personalities on the entire website. Today, Oakley credits a lot of his early success to the fact that he was relatable and interesting to a lot of people browsing YouTube. As a young openly gay man, he was seen as a little bit of a novelty by some YouTube users. As of this writing, Tyler has over 8 million subscribers on YouTube, and his channel boasts hundreds of different videos. He regularly collaborates with big names like Tom Daley, Zooey Deschanel, Carrie Underwood, Kelly Clarkson, Shawn Mendes, and Seth Rogen on his show The Tyler Oakley Show.

Tyler is seen as one of the first openly gay people to become popular on YouTube, and so he used his position to raise awareness for social causes close to his heart. Over the years, he has spoken out about topics relating to LGBT rights, education, healthcare, and LGBT youth. Aside from regularly creating videos where he shares his thoughts on various social and political issues, Tyler is also known to leverage his large social media following to draw attention to certain controversies and causes that he felt deserved the attention. For instance, following the controversial election of US President Donald Trump, Tyler has regularly taken to Twitter to voice his discontent with the state of the country. 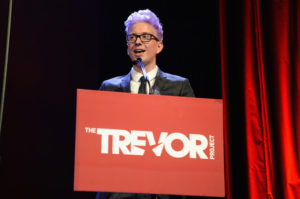 Tyler does a lot of concrete things to support the causes that he cares about, too. It’s not all just talk. Tyler is perhaps best known for his support for The Trevor Project, a non-profit organization founded in 1998 that is dedicated to leading suicide prevention efforts among LGBT youth. He began to work as an intern for the organization in 2009, and to this day he serves as a co-host for TrevorLIVE, a red carpet event that the charity holds on an annual basis. Over the years, he has raised and donated hundreds of thousands of dollars to The Trevor Project. YouTube celebrities have a bad tendency to run their mouth more than they actually make things happen, but that really isn’t the case with this guy. 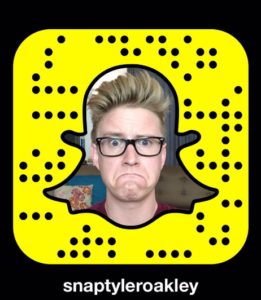 If you want to add Tyler Oakley on Snapchat, then you can do so by using your app to scan his snapcode, which I’ve placed above. If you don’t want to do that, then you should also be able to follow Tyler by clicking the link that I’ve placed right here.

Tyler has a public, official, verified Facebook account that you can find under the username @thetyleroakley. Alternatively, you can take a look at this page by clicking link here.

Tyler has over 5 million followers on Twitter. If you want to become one of those 5 million people, then you can do so by searching for him under the name @tyleroakley. Take a look at what he shares with his followers by clicking the link right here.

Do you want to follow Tyler Oakley on Instagram? You can look for him under his official Instagram username @tyleroakley. You should also be able to check out his page by clicking the link right here.

Unfortunately, if Tyler Oakley has any kind of Kik account, he has yet to make the details regarding that account public. If he has a Kik username, then he hasn’t shared it with any of his fans. So, if you have encountered someone on Kik claiming to be this YouTube star, then I have a strong feeling that they’re lying to you.

Tyler Oakley has a very large following on Tumblr. You can search for him under the URL tyleroakley.tumblr.com, or you could just click the link right here to reach his blog and see what he shares with his many followers.