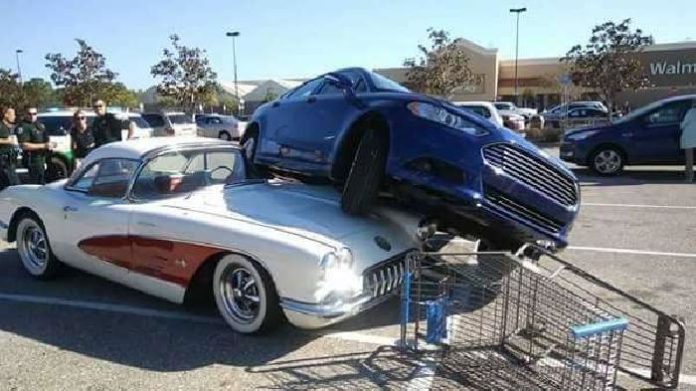 A classic 1959 Corvette was parked near a Florida Walmart when a Ford Fusion parked on its side. Video of the crash was not captured but a visitor did take a video of the car sitting on the side of the classic and being removed from underneath.

The video of the aftermath of the parking lot crash was taken by Jason Motz, who said the classic was parked when a driver cutting through the lot accidentally hit the gas. The accident left the Ford Fusion parked on one side of the 1959 Corvette.

People walking in the parking lot watched as police and the owner of the classic pushed the car from underneath. The side of the front left tire appears to be damaged as well as part of the door. People are seen taking pictures of the two cars after they are removed. The video of the aftermath of the crash has more than 180,000 views.

We don’t see 1959 Corvette’s everyday, especially with a car parked on its side. The accident was bad for the classic as it will definitely need some expensive repairs. But the crash could’ve been a lot worse for the classic if the car had gone completely over the hood. A bad day for the owner of the 1959 Corvette but the good news is that no one was injured in the accident.