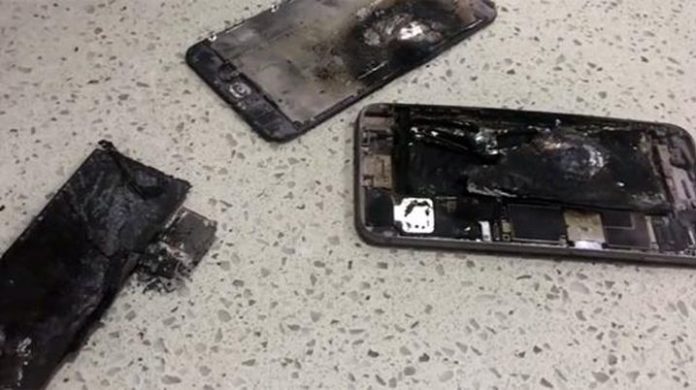 A man from Queensland decided to take his iPhone 6 Plus to get the screen fixed. But the phone ended up being completely destroyed after exploding. The incident happened as the man appeared to be explaining what was wrong with the phone. He was about to hand it over to the employee in the repair shop when it exploded in his hands.

The man was explaining to the repair shop employee that his phone wouldn’t hold charge when the incident happened. The video of the security camera in the repair shop shows the man talking with the phone in his hands when it begins smoking. The man quickly drops the iPhone 6 Plus over the counter while the woman next to him and the employee step back. He also steps back but returns to see that the phone is overheating and smoking. The phone sits in the counter for a few seconds before the employee returns with a fire extinguisher. The man and woman leave the repair shop for a few seconds as the fire extinguisher and phone smoke begins to go all over the repair shop.

A security camera above the counter in the repair shop shows the man touching the screen before it begins smoking. The phone continued to throw out smoke before the employee returned with a fire extinguisher.

The explosion left the phone complete destroyed and the repair shop said it had to close for the rest of the day due to the fumes left. The phone’s explosion blew open the screen and burned everything inside the phone.

Exploding phones cost Samsung, one of Apple’s biggest competitors, billions of dollars in 2016. The Galaxy Note 7 issues were one of the biggest tech topics in 2016 but the iPhone 6 has also been involved in a few incidents. In October 2016, there were reports of an iPhone 6 exploding in a student’s back pocket, burning a hole in his jeans. In December 2016, a woman also said her iPhone 6 exploded in her pocket.