Average Car Salesman Salary 2018 – How Much Do Car Salesmen Make

Your perception of a car salesperson may not be the best. When a lot of people think of people who sell cars, they immediately think of the stereotypical used car salesman. The stereotypical used car salesman is greasy and immoral, and he is willing to lie to get you to buy one of his cars. However, car sales in real life isn’t quite so dramatic. The majority of car salesmen are people who are just trying to make an honest living by selling cars. It’s a common career choice among people who hold an interest in both cars and in sales. It’s not always fun work, but it is deeply rewarding work. There’s something particularly satisfying about knowing that you’re helping people make such a large purchasing decision.

Just like with any other kind of salesman, your own performance is usually able to affect your own salary. Most car salespeople work on commission, which means that their salary is directly affected by how many cars they sell. This may seem stressful for a lot of people, but some are capable of truly thriving under this sort of pressure. How much does your average car salesman actually make? How could that figure be affected by outside factors like experience or location? How does someone actually become a car salesman? In this article, I plan on answering all of those questions. Without further delay, let’s see if we can’t learn a little bit more about this often misunderstood profession.

Your average car salesman makes about $42,150 per year, which is a pretty good amount of money for someone to make. This salary means that your average car salesman is selling about ten cars per month. Selling cars isn’t a very easy thing to do, especially considering how much most cars actually cost these days. As a result, people who are able to do this very well are paid very well in turn. Since that’s an average salary, though, that means that some people are obviously paid more and some people are paid less. How can location affect the average salary of a car salesman? Obviously, certain cities have a greater demand for this form of transportation. If you live in a major city like Miami, Cleveland, Detroit, Chicago, or Denver, then you should have a much easier time finding work as a car salesman. You should also have an easier time pushing product once you get there, which results in a bigger paycheck for you. 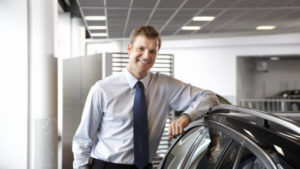 Next, let’s consider how education can affect the salary of a car salesman. In many cases, a college education isn’t really required in order to become a car salesperson. Employers will usually care more about your prior experience in sales than they would care about any college degree. However, I think that it’s obvious that no one would look down on your for having some kind of degree in business entering into this career. It wouldn’t hurt, but it may not help you as much as you would like. I can’t stress enough how much the income of your average car salesman is affected by education. You can have nothing but a high school diploma and make six figures as a car salesman, provided that you’re good at your job and you’re able to sell cars. Education does not have a very large effect on the salary of a car salesperson, and it certainly doesn’t affect salary enough to warrant going into debt to obtain one.

How to become a car salesman – Do you have to go to school?

With that in mind, what does someone actually have to do in order to become a car salesman? Unlike working in some kind of trade, it’s not like you can go to a technical college and take classes on selling cars. This is a unique line of work, and so the path there is obviously unique. The first thing that you need, though, is a high school education. Just about every job out there likes to see applicants who graduated from high school, so it’s very important that you have this. Work in car sales doesn’t involve many educational requirements, but this is one that most employers won’t bend on. If you have already dropped out of high school, I seriously suggest that you look into taking some kind of exam so that you can obtain a GED or something similar. Once you’re done with high school, you can begin to think about going to college. 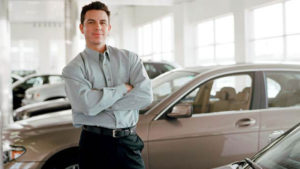 Like I said before, a college education is by no means required to find a successful career in sales. You should not put yourself in debt just to obtain a degree. However, if you have a scholarship or if you can afford it, then you may want to consider it. Even if your education doesn’t get you a greater commission rate, it may still make you a more competitive applicant to jobs at different dealerships. Not only that, but you may even learn a thing or two about how to be a great salesperson. Regardless as to whether or not you decide to go to college, you should still make sure that you get some kind of sales experience before you head into work as a car salesman. The sky is really the limit here, but you should see if you can’t get a part-time job at some kind of high-end retailer or department store. Not only will you acquire valuable on the job experience and learn a lot, but you’ll also be able to say that you’re not just a newbie to sales.

Once all of your “pre-career” stuff is out of the way, you can begin to look for work. If you were lucky enough to work in something related to automotives during your earlier jobs, you may want to contact some of the people that you met and see if they can’t elp you get a job. Otherwise, it’s up to you to search for opening and see where you can end up. You can either choose to apply to a franchise dealer or a used car lot, and depending on where you apply, you may be expected to meet certain requirements in terms of past experience or knowledge of cars. When you’re first hired, you may struggle as you try to get your bearings, especially if this is one of your first jobs in sales. However, you shouldn’t be deterred. As long as you have the people skills and the passion for your work, you’ll be selling cars and making money in no time.