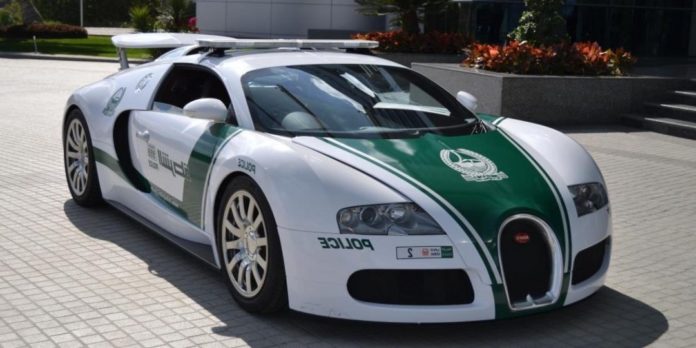 Dubai is a city known for its luxury and even the police have the best cars to catch those who decide to break the law. The city now has the fastest police car in the world, according to the Guinness World Records. The collection of world records has officially certified the Bugatti Veyron as the fastest police in service. The sports car, which has a price tag of about $1.5 million, is part of the fleet of Dubai’s police cars. The Bugatti Veyron has been certified as the fastest but Dubai police also have other cars that are very expensive.

The Bugatti Veyron is not a car we see every day but the one that belongs to Dubai’s police has become very popular. A member of Dubai police recently spoke to Gulf News and said that tourists usually call them on the emergency number to know about the sports cars. He also said that people often ask where the cars will be so they can take pictures with them. Dubai police bought the car in April 2016 and it has become very popular since becoming part of the fleet. Dubai police has more than ten sports cars, including a Lamborghini Aventador, Audi R8 and an Aston Martin One-77. Those three cars alone cost nearly $2 million.

Dubai now has another world record with the Bugatti Veyron as the world’s fastest police car. The Bugatti Veyron has a top speed of 253 mph, so it is unlikely that anyone who breaks the law in the city will escape if chased by this car.  The sports cars from Dubai police are already popular around the world as they are just one of the few cities that have a fleet like this one. Dubai police has 14 sports cars and while only one has the record, all are very expensive and fast.