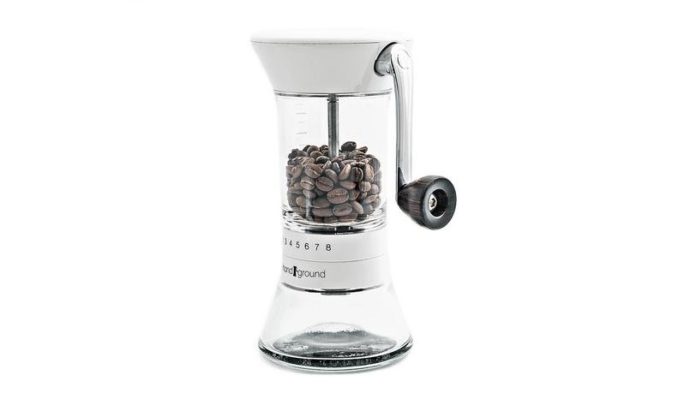 It has been a little while since I got something interesting to review in the world of coffee grinders. Last week I got the Handground, and let me tell you, it is one of the most interesting manual grinders on the market right now. No other manual grinder, in this price range, can match it for volume, and it is clear that the designers have spent a lot of time honing their build, making it as perfect as possible.

Manual grinders have a fair number of positive qualities over their electric counterparts. Primarily is the base grinding method. With the electrics you find in this price range there tend to only be bladed builds available. Not so with the manuals, as all manual coffee grinders came with a burr grinder as standard. Add in the free exercise and you’re golden.

The Handground came out of a successful kickstarter project, and it is easy to see why. For some reason most manual coffee grinders tend to be small, one or two cup affairs. The larger ones tend to have uniformity issues, and that is where the Handground sought to stake a claim. Their grinder is huge, able to fill many cups, and if you rick a french press the added volume is useful here. The actual grind itself also tends to be impressively uniform.

A minor issue to get out of the way first. I do not drink coffee. I merely make the coffee. My partner is the one who will be taste testing, she has been drinking coffee for a long time now, and is more than up to the task of discerning whether a brew is terrible or merely very bad. I did spend a number of years as a barista, and have been home brewing coffee with a variety of methods for a number of years.

So to the methodology. I will but grinding up three gradients, a coarse, a medium and a fine, and testing in one of two brewing methods. The coarse will of course be used in the french press, while the fine will be used in the moka pot. The Medium grind is more for a drip coffee, and seen as I don’t have one I’ll be using a simple observation test to see how uniform it is.

So let’s get to it then. First a look at the design of the grinder.

I am in love with this grinder. From a design perspective it might be little more than perfunctory though. The guts of the gushing in this review will be down in the testing section. They do offer it in three different styles, but none really screen out at me like the copper finish grinder I tested out a few weeks back. The Handground did come in copper, for a select few kickstarter contributors, and as a result I am supremely jealous.  The hopper here is massive, and take up the majority of the body, with a max bean fill of around 100g, or 3.5oz of beans. There is some nice heft to the build, at a little under 2 pounds, and while I found it very easy to get my grind on, I have heard reports of the grinder becoming unruly when used by less physically able folk, so it might be worth looking into a rubber mat to use it on.

There are 15 grind settings to choose from, though in general you will concern your self with 5 of them, depending on the kinds of coffee you tend to make. The burr grinders are 100% ceramics, which are great for both their longevity and their ability to repel odors, great if you want to try out different kinds of coffee. It doesn’t do to brew a Colombian that tastes like an Costa Rican after all. There are really only three parts to concern yourself with, the hopper, the grinder and the bottom container, and cleaning all three is super easy. You must do it by hand though, as machine washing can damage the parts.

Now we need to talk about grinding method, and why a burr grinder is, in so many ways, far better than a bladed grinder for coffee making. There are two kinds of grinding method on the market today. The bladed and the burr. Bladed grinders grind for as long as you hold down the button, and as a result the grind you are left with is entirely random. A random grind leads to a random flavor for your coffee. This is all down to the size of the particles. when you brew, the particles release their flavor and chemicals at a rate dependant on their size, so when the sizes are random you get different parts of the brew releasing at different times, so no matter when you take it off the heat you get a coffee that is either too weak, too bitter, or too muddled. I maintain that if you hold the button in long enough a bladed grinder can make a very nice espresso or moka pot coffee, and the fact that you can use it to grind all kinds of things really is their saving grace, but for any kind of coarse brew you will want to avoid a bladed grinder. Burr grinders, for the most part, grind uniformly, so the particle release at the same time. At that stage it is just a matter of dialing in your brewing time to get the coffee you want.

Overall the Handground impresses me. The options available are good, and the actual use of the device is clean and simple. I get why they don’t sell the copper finish grinder as standard, it would drive the price up beyond most folk’s wallets, but I would have liked the option all the same.

Onward to the brew! I mentioned before that I have been making coffee for years. My preferred method is the moka pot, a nice low cost alternative to buying a steam engine for your kitchen. They are only about $20 and they share an lot in common with the big boy espresso. It is a steamed drink, and when you make it right you get that lovely crema layer, a must in terms of taste, texture and aesthetic for me. Do not be fooled by the “cheaper” espresso machines you see out there. They typically brew at around 1 bar, the same pressure as a moka pot at a fraction of the cost True espresso is made using steam at around 9 bar. My other brewing method is the french press. I bought it specifically for this series of reviews, and have fallen in love with it. It is less time consuming than the moka pot, and the smells are just as rich. It makes a nice strong cup of coffee, perfect for the morning.

So now the grind. You can see the quality already, I assume, and the coarse grind came out lovely. the coarse is for the french press, and I found it brewed perfectly, the aromas that came off it were to die for, and I am told that the flavor was full bodied, and not bitter. A good grinder will allow you to make a flavorful, and bitterless cup of coffee with some careful calculations after all. The medium grind looks to be just as good as the coarse, and I now wish I can a drip coffee machine to really give it a good test. As it stands I have to move onto the moka coffee. My go to moka coffee drink is a low calorie vanilla cappuccino, using a combination of vanilla extract and stevia, combined with foamed skimmed milk and cocoa powder to finish. The final brew looked gorgeous, the crema formed and the foamed milk blended well, the quintessential cappuccino to me. My partner was greatly enthused with the results, and compared it favorably to the Hario’s brew. Overall the Handground knocked it out of the park.

Now we come to the pricing section, and while I am not surprised to see the tag here, I would still like to see it come down a bit. The Handground is going to cost you around $60 to $80. Not a ludicrous price, but also not a spur of the moment purchase. Perhaps that’s a good thing, as I can see the market for this, and while I think it is easy to at least argue that it is for everyone, it may not be the actual case.

I love this build. The quality of the coffee that comes out of it is impressive, but it has to be said that unless you make multiple kinds of coffee in a given week, like what i do, then you may be better served with a different grinder. I have reviewed a lot of the cheaper brands out there, and while most lacked in one area or another, all had at least one kind of coffee it could do well. The Handground knocks all of them out of the park across the board though, so if you have the cash, and want the best coffee you can get, then you have to get the Handground.