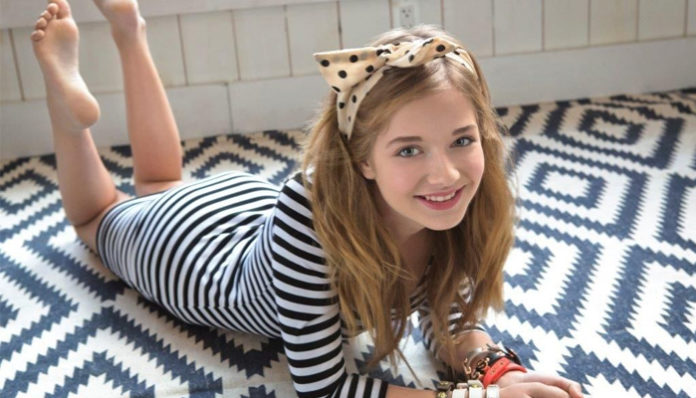 American classical crossover singer Jackie Evancho rose to fame at the age of ten after finishing second on the fifth season of the reality competition, America’s Got Talent. Born in Pittsburgh, Pennsylvania, she started singing at a young age, having been inspired by the musical, The Phantom of the Opera. Before long, the blonde was showcasing her vocals at a number of local talent shows, where she garnered much attention from the crowd; not only that, but she also began singing at nursing homes, and churches. Wanting to improve her craft, Evancho eventually enrolled herself in voice lessons while still in grade school. At the age of nine, she participated in the Hitman Talent Search Contest, where she ultimately finished second- it was then that she caught the attention of music producer, David Foster who later invited her to sing at his concert in New Jersey. Just a few months later, Evancho released her first independent studio album entitled, Prelude to a Dream (2009).

Mostly featuring covers of classical crossover hits, the album successfully charted on the US Charts in 2010. That same year, Evancho also competed in the popular NBC reality series, America’s Got Talent where her vocals captured the hearts of both the judges and audience members. Successfully advancing through the competition, she eventually found herself in the finales, from which she ultimately came out in second place behind winner, Michael Grimm. A year after being on the show, Evancho released her major-label debut album, Dream With Me under Columbia Records. A smash hit, it peaked at number two on the US Billboard Top 200 and has since gone Gold in the United States. To this day, it remains to be the best selling album of her career. As of 2017, the young vocalist has released a total of six albums including Heavenly Christmas (2011), Songs from the Silver Screen (2012), Awakening (2014), and Someday at Christmas (2016).

Aside from her studio albums, Evancho has also released three live albums, one extended play, and over thirty singles- most of which have charted in the US. Some of her most popular hits include O Mio Babbino Caro, Everytime, Ave Maria (Schubert), Panis Angelicus), Somewhere, A Mother’s Prayer, and All I Ask of You. In addition to her solo works, the Pennsylvania-native has also collaborated with a number of other artists such as David Foster, Vittorio Grigolo, Tony Bennett, Peter Hollens, and Jumaane Smith, to name a few. Besides her singing, Evancho has also acted in a couple of feature films including She’s Out of My League (2010), and The Company You Keep (2012).

So what has the young, talented star been up to recently? Has the blonde been working on any new projects? Can we expect to see her on stage anytime soon this year? What has she been busy with lately? What happened to Jackie Evancho? Where is she now in 2018? 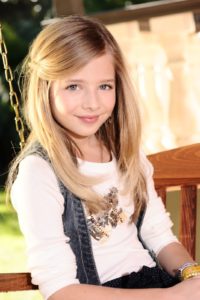 Born on April 9, 2000 in Pittsburgh, Pennsylvania, Jackie Evancho (Birth Name: Jacqueline Marie Evancho) is the daughter of Michael and Lisa Evancho, the former of whom used to operate a security camera company; the second oldest out of four siblings, she has an older transgender sister named Juliet, a younger sister named Rachel and a younger brother named Zachary. Raised in a Catholic household in the Pittsburgh suburbs, she went to school in the Pine Richland School district for several years, prior to switching to online schooling due to her performing schedule. A natural performer, Evancho first inspired to sing at the age of eight, after seeing the musical film, The Phantom of the Opera. Before long, she was singing her way into a number of local talent competitions, where she consistently came in second.

While still in grade school, Evancho had already become a local star in her hometown of Pittsburgh. In 2009, she participated in the Hitman Talent Search Contest where she ultimately emerged as the runner up. Around that same time, her singing caught the attention of music producer David Foster who later invited her to perform on stage with him at his concert in New Jersey. Later that same year, Evancho released her independent debut album entitled, Prelude to a Dream. From there, she received a big break after being selected to compete on the fifth season of America’s Got Talent in 2010; she had unsuccessfully auditioned twice before. 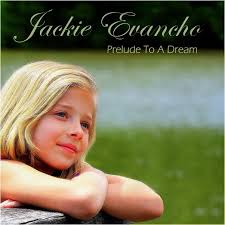 On November 10, 2009, Evancho- who was only nine years old at the time, released her independent debut- a studio album entitled, Prelude to a Dream. Distributed via CD Baby, the one-hour long album primarily featured covers of classical crossover hits such as Martina McBride’s Concrete Angel, Josh Groban’s To Where You Are, and Andrea Bocelli’s The Prayer; some of the other included titles include Starry Starry Night (Vincent), Memory, Think of Me, Teaching Angels How to Fly, The Prayer, and Amazing Grace.

Upon its release, Prelude to a Dream debuted on the Billboard Top 200 at number 121 and on the Classical Albums Chart at number two; by the end of the first week, it had sold approximately 4000 copies. The album eventually reached several other US Charts including the Top Heatseekers, the Top Independent Albums, and Top Digital Albums. Close to a year after its original release, Prelude to a Dream was withdrawn from distribution by Evancho’s parents for the reason that “she will be concentrating [instead] on new material”.

Two years later on June 3, 2011, Evancho released her second full length album entitled, Dream With Me under Columbia Records. Her first major label release, the album’s production was handled by multi-Grammy Award-winning music producer, David Foster. Approximately an hour in length, it boasted fourteen tracks including When You Wish Upon a Star, All I Ask of You, The Lord’s Prayer, Somewhere, Nessun Dorma, A Mother’s Prayer, and Dream With Me; a couple of songs from the album also featured popular artists such as Susan Boyle, Barbra Streisand. To promote the album, Evancho performed a number of concerts in the US, Toronto, and London- she was also featured in a number of major talk shows.

Shortly after reaching store shelves, Dream With Me entered the US Billboard Top 200 at number two- a vast improvement in terms of rankings compared to what was achieved by her independent album a couple of years prior; on the US Classical Chart, it also peaked at number one. By the end of the first week, it had sold approximately 161,000 copies across the United States. Praised for her “truly talented voice” and “constant emotion”, it garnered positive reviews from several contemporary music critics; Allmusic also gave it a three and a half star rating. As of July 2011, Dream With Me has gone Gold after selling over 500,000  units; to this day, it remains to be Evancho’s best-selling studio album. 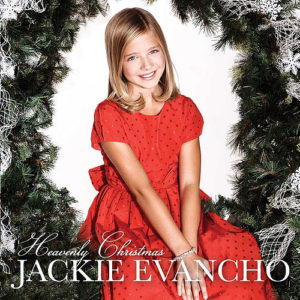 In December of 2011, just a few months after the release of her major-label debut, Evancho released her fourth album, Heavenly Christmas. Her first full length holiday album, it came with ten tracks, all of which were produced by Rob Mousey. Featuring covers of classical Christmas songs, some of the numbers included I’ll Be Home For Christmas, What Child Is This, O Come All Ye Faithful, Walking in the Air, Ding Dong Merrily on High, Away in a Manger, and The First Noel.

Fairly successful, Heavenly Christmas entered the Billboard Classical Albums at number one, and peaked at number three and number eleven on the Holiday Albums Chart and Billboard Top 200 respectively. As of December 2012, more than 300,000 copies of the album have been sold in the US. Lauded for its “tasteful arrangements” and Evancho’s “crystal clear voice”, it eventually ranked number four in the 2011 year end chart.

The following year, the young star released her fourth studio album entitled, Songs from the Silver Screen. Produced by Humberto Gatica and Bill Ross, it contained a mix of ballads from various popular films. Promoted by a concert tour which ran from the summer of 2012 to the summer of 2013, some of the tracks from the album included, Pure Imagination, Can You Feel the Love Tonight, I See the Light, My Heart Will Go On, When I Fall in Love, Some Enchanted Evening, and Come What May.

Another successful endeavor for the young singer, it entered the US Billboard Top 200 at number seven and on the Classical Albums Chart at number one. Across the border in Canada, it also peaked at number twenty two on the Canadian Albums Chart; overseas, it reached number 141 in Japan. Her third album to reach the top ten, Songs from the Silver Screen marked the second time time that an American artist has ever achieved such a feat at a young age. The album eventually spawned two singles, My Heart Will Go On and Music of the Night, which peaked at number nine and number seventeen on the US Classical chart respectively. 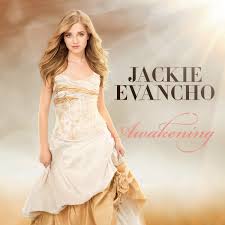 On September 23, 2014, the Pennsylvania-native released her fifth studio album, Awakening under Sony Masterwork’s Portrait Records label. Preceded by two singles, Think of Me and The Rains of Castamere, its production was handled by Nick Patrick. Once again promoted by a concert tour, it contained a twelve-song track list which mostly featured a mix of various classical pieces such as Your Love from Once Upon a Time in the West, Memories from The Silent Force, With or Without You from The Joshua Tree, among others. A deluxe edition accompanied by a bonus Christmas EP was also made available exclusively at Walmart.

Evancho’s latest album, Someday at Christmas was released on October 28, 2016. Her second full length holiday album, it contained twelve different tracks- a number of which had been previously released; the three new numbers included Someday at Christmas, and two alternate version of The Little Drummer Boy, one of which featured Il Volo. Upon its release, it peaked at the top of the Billboard Classical Albums Chart and at number ninety three on the Billboard 200; it also managed to reach number three on the US Holiday Albums Chart. According to Billboard, Someday at Christmas was the 27th best-selling classical album of 2016.

In terms of public appearances, Evancho recently sang the country’s national anthem at President Donald Trump’s inauguration on January 20, 2017. But she has more up her sleeve- the sixteen year old former runnerup of America’s Got Talent will also be holding a concert show at the Benedum this upcoming spring on March 5, 2017- it will be her first time at the location in three years.

As if that wasn’t enough, Evancho also has another studio album planned, which is set to be released- also in March. According to reports, not only will it feature a number of cover songs, but it will also include a few original tracks that were written by none other than the artist herself.

If you’d like to keep in touch with the young star, you can do so by following her on social media- you can find her on Twitter at @jackieevancho or on Instagram at @officialjackieevancho. Don’t forget to also visit her official website for the latest news announcements.