What Happened to Sawyer Fredericks – Now in 2018 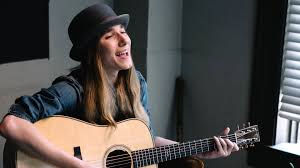 American singer-songwriter Sawyer Fredericks came to the public’s attention after winning the eighth season of the NBC singing competition, The Voice. Born in Connecticut, he grew up in a New York farm surrounded by music. As such, singing was something that he naturally fell into at a young age. Later enrolling himself in voice lessons, he began performing at various events- from open mics to Local Farmer’s Markets at the age of twelve. Gradually pouring more time and effort into his hobby and passion, Fredericks eventually released his own independent LP entitled, Out My Window by the time he was fourteen. From there, he was scouted by talent agents from NBC’s award-winning series The Voice, who invited him to audition for the popular reality TV show. After gaining approval from all four of the judges, Fredericks found himself striving toward fame in the competition. Despite being the youngest contestant, he ultimately proved himself to be a worthy contender.

Following a rendition of I’m a Man of Constant Sorrow for his blind audition, all four of the coaches had their chairs turned around in a matter of seconds. From there, Fredericks ultimately chose to join Pharrell Williams as his coach. Determined to climb his way up toward stardom, he poured everything into the competition; as he continued to do so, he found himself inching ever so close toward the finals. Before long, Fredericks’ natural talents had brought him to the grand finale of The Voice. A few heartfelt performances later, he was crowned as the winner of the season- a title that also came with a cash prize of $100,000 and a recording deal with Republic Records. The youngest artist to win in the show’s history, his competition singles had been downloaded over 1,000,000 times throughout the course of the show. By the end of it, Fredericks had successfully garnered himself a strong and devoted fanbase.

As per his winnings, the young singer signed with Republic Records shortly after his big win in the summer of 2015. Following that, he performed at a number of local events, prior to releasing his first extended play, Sawyer Fredericks later that fall. A hit on the US folk and rock charts, it has since sold over 22,000 copies across the country. Aside from his musical releases, he has also opened for a number of concert tours between 2015 and 2016; for instance, he has headlined for Good Old War and the Langhorne Slim & The Law. In May of 2016, The Voice winner also embarked on a US tour, which brought him to dozens of different cities in the country.

So what has the talented seventeen-year-old been up to since then? Has he been recording back at the studio as of late? Or has concert shows been keeping him busy? Can we expect to see any new releases from the season eight winner of The Voice? What happened to Sawyer Fredericks? Where is he now in 2018? 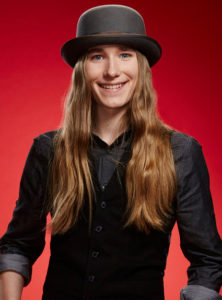 Born on March 31, 1999, in Newtown, Connecticut, Sawyer Christopher Fredericks is the youngest out of three siblings; he has two older brothers. After spending the first eight years of his childhood in the city of Newton, his family relocated to Fultonville, New York where they settled down in an 88-acre farm. Homeschooled in an unschooling environment, he grew up surrounded by music. When he wasn’t helping his parents with the farm, he was either singing or listening to music- something that would eventually grow into a burning passion. Wanting to improve his craft, Fredericks later enrolled himself in voice lessons at the age of eleven. By the time he was twelve, his vocal improvements had led him to perform at various local venues from Open Macs to Local Farmer Markets events.

Continuing to perfect his musical style, Fredericks eventually recorded a six-track demo tape called, Breaking Ice in 2012. From there, he later released an independent LP entitled, Out My Window, which consisted of fifteen original acoustic tracks when he was fourteen years old. Wanting to gain more exposure, the aspiring artist soon found himself uploading his music onto Youtube. It was ultimately there, on the online video viewing platform, that he captured the attention of talent scouts form the NBC award-winning competition series, The Voice. Impressed by his singing abilities, they soon invited the teen to audition for the show.

Sawyer Fredericks on The Voice 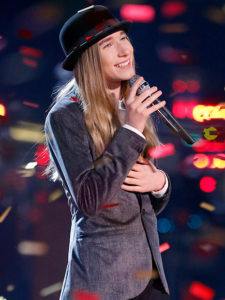 Jumping at the chance, Fredericks opted to sing the traditional folksong, I’m a Man of Constant Sorrow by Dick Burnett for his televised blind audition, which aired on February 23, 2015. A stunning performance, it quickly led all four of the show’s judges, Christina Aguilera, Adam Levine, Pharrell Williams, and Blake Shelton to turn their chairs around. From there, the folk singer ultimately chose to join Williams’ Team.

Given approval by the series’ judges, the New Yorker subsequently found himself paired up against fellow contestant, Noelle Bybee during the Battle round. After performing Have You Ever Seen the Rain by Creedence Clearwater Rival, he was chosen by Coach William to move onto the next round, while Bybee was sent home.

The following week, Fredericks was grouped with Paul Pfau and Mia Z. for a three-way match for the Knockout round. Singing against his two competitors, he chose Collide by Howie Day to be his song for the Top 32. Luckily, it earned him another save by Coach Williams, which buzzed him through to the next stage of the competition; Mia Z. also advanced to the next round.

For the subsequent Battle Round, the folk singer chose to perform Trouble by Ray LaMontagne, which ultimately earned him a spot in the Top 10. From there, he covered John Lennon’s classic title, Imagine, which earned him high praises from the judges. Not only that, but it also became his first competition single to reach number ten on the iTunes Singles Chart- something that came with a 10x multiplier bonus.

Successfully moving on to the Top Eight, Fredericks then performed Iris by Goo Goo Dolls, which once again reached the top ten on the iTunes Chart, having peaked at number four. Garnering enough votes to advance to the next stage of the competition, it wasn’t long until he was singing Simple Man by Lynyrd Skynyrd for the Top Six- which hit number two on the iTunes Chart-making it his third consecutive performance to reach number ten.

For the Top Six, he sang Al Green’s Take Me to the River while accompanied by a teen dance troupe. Afterward, he was allowed to perform a track not yet released by a major label, something rarely seen on The Voice; for that, he selected Shine On by May Erlewine. It was later revealed that while Erlewine herself had given him permission to use the song, she was a fan of fellow competitor, Joshua Davis. Rising to number three on the iTunes Chart, it later became the highest-rated title on the competition that week. Following the Top Six round, Fredericks returned to his native New York for a homecoming visit, during which he performed in front of an audience of 4000.

Fighting to be part of the top five, Fredericks later sang For What It’s Worth by Buffalo Springfield and A Thousand Years by Christina Perry for the subsequent round. Once again garnering the highest ratings of the week, the songs reached number three and number on the iTunes chart respectively. 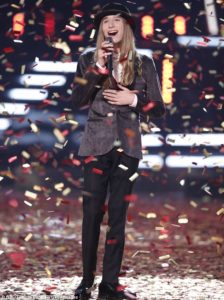 Having successfully earned a spot in the finals, he later came out with the single, Please, which was written by Ray Lamontagne. Performing alongside Coach Williams for the traditional duet, the two sang Summer Breeze by Seals and Crofts; it would later reach number nineteen on iTunes the fooling week. After the duet, Fredericks took to the stage with a grand performance of Neil Young’s Old Man which once again, earned him great applause from the audience.

The next day- July 19, 2015, Fredericks performed a number of hits including Have You Ever Seen the Rain, Born on the Bayou, and Bad Moon Rising with John Fogerty of Creedence Clearwater Rival for the The Voice results show. By the end, the seventeen year old was announced as the winner of the season; Meghan Linsey was the runner up while Joshua Davis finished third.

Sawyer Fredericks After The Voice 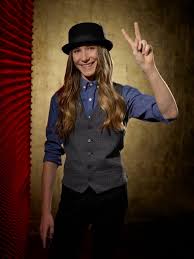 In May of 2015, Frederick signed on as a recording artist with Republic Records. Prior to releasing his music debut however, he began performing at a number of events including at the New York State Fair; in September of that year, he even sang alongside Mia Zanotti, a fellow contestant from his season of The Voice in New York City. A couple of months later, he recorded and penned a song entitled, Forever Wrong (Frankie & Aurora’s Love Theme) which was later included in the album, Magic Strings of Frankie Presto.

In addition to making scattered appearances across various venues, Fredericks also headlined various concert shows including ones for Good Old War and A Great Big World.

On November 11, 2015, the folk singer released his self-titled extended play, Sawyer Fredericks through Republic Records. Falling under the category of pop rock, it came with four tracks including Stranger, Still Here, Lovers Still Alone, and Take it All, all of which were co-written by the artist himself; two of them also featured Mia Zanotti in the vocals. Met primarily with favourable reviews, the EP ended up peaking at number forty nine on the US Billboard Top 200; additionally, it also reached number two and number three on the US Folk and US Rock Music Charts respectively. As of 2016, Sawyer Fredericks has sold approximately 22,000 copies in the United States.

Aside from his EP, the New York-native has also contributed a number of songs such as I’m a Man of Constant Sorrow, Take Me to the River, For What It’s Worth, A Thousand Years, Simple Man, and Old Man in the studio album, The Voice: The Complete Season 8 Collection. As well, he was also involved with the making of the full length album, A Good Storm, which was released on May 13, 2016.

Just this past January, the former The Voice winner was invited to perform the National Anthem on stage at the CCM/ECHL All-Star Classic event which took place in Glens Falls, New York. A posted video of the performance has since been viewed close to 8000 times on Youtube.

Speaking of on-stage performances, Frederick also has a number of shows planned for the upcoming months. According to his official website, he will be performing in various venues in New York, from the city of Cohoes in April to Saratoga Springs this May. Interested in seeing a performance? Some tickets are still available! Please refer to his official website sawyerfredericks.com for more information.

If you’d like to stay in touch with the talented folk singer, you can do so by following him on social media- you can find Sawyer Fredericks on Twitter or Instagram at @SawyerFrdrx.