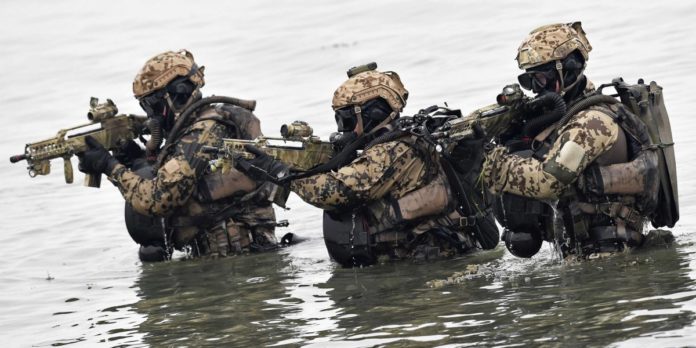 In today’s world, the militaries of many countries are allied. With coalitions, partnerships and plenty of combined force usage, the idea of a singular country fighting another is almost as foreign to us as a tank may have been to the armies of the American Revolution. However, many countries still take pride in being among the best around, without the strength of allies lent to them. Here, we take a look at the 10 most powerful militaries in the world. To properly measure for this rating, we will take into account such factors as overall military force, recruitment, potential draft pool, technological and logistic capacities, and finally, territory as a determination of invasion defense capacity (though this measure will be somewhat muted given the modern nature of war). Due to the deterrent nature of such weapons, the world’s nuclear arsenal are not included in this ranking set. 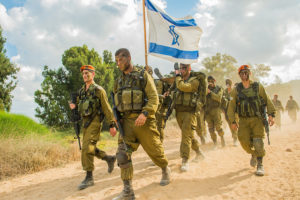 Starting off our list of the top 10 most powerful militaries of the world is the Israeli military. Despite being last on this list in terms of supply and power within borders, Israel plenty of power in terms of partnerships, having created a mutually beneficial partnership with nearly every nation on this list hereafter. Most of the army of Israel is very well equipped and being one of the most research intensive domestic economies in the world, new defense measures are nearly always being developed. At time of writing, most aircraft for the Israeli Air Force is either given or on loan from the United States, while many drones, land carriers and weapons are made within the country. Most renowned for their intelligence and special operations groups, Israel’s defense is one of practicality; The larger numbers may not always determine the winner in war, but the apt use of what you do have may turn the tide of battle. 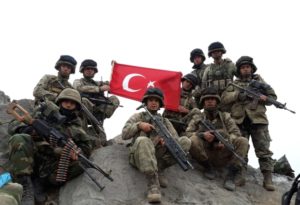 Given the next door Syrian war causing a bit of trouble, as well as a recently failed coup attempt by the Turkish military, one may expect that Turkey’s military may be hurting a little bit. This is however not the case. With a significant role in plenty of recent wars and peacekeeping campaigns, Turkey has acquired some level of acumen in regards to military skill and equipment. Often seen as a navy and air force heavy military, Turkey has over 1,000 air craft and nearly 200 ships at its disposal, the latter of which has primarily been lent to operations within the Black Sea. Now primarily focused on counter-terror operations, airstrikes, and domestically fueled issues, the Turkish military is quickly adjusting to fighting a war with a mostly unknown enemy, and has thus earned its number 9 spot. 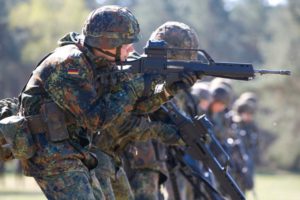 Next up is Germany, often considered one of the top powerhouses in Europe regarding military might. Having built itself back up from the days of East and West Germany, this nation is one of the only NATO nations to ever use Russian manufactured military aircraft in their service. With an annual defense budget of over $36 billion, Germany is well funded, and despite having both a lower aircraft and naval count, the overall forces are significantly higher in terms of raw numbers. With a high number of both active and reserve personnel, as well as highly advanced training against terrorist measures, Germany certainly is well founded to be within the top 8 of the worlds militaries. 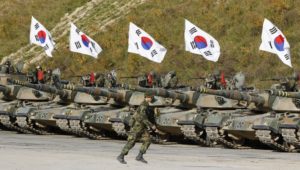 South Korea has for the last half century been a critical point in the world in terms of military contention. As a result, many nations have lent aid to South Korea to help them develop arms and security against their northern neighbor and adversary. With nearly 2,500 tanks, 1,500 aircraft and a navy of 166 ships, Korea is particularly well armed for any form of vehicle based assault. With an active and reserve combined count of nearly 3.5 million, and training often aided by the United States and other NATO allies, South Korea seems quite well equipped to handle about any problem it may encounter. Beyond its own borders, South Korea has often aided in peacekeeping missions as well as naval transports near the Horn of Africa. 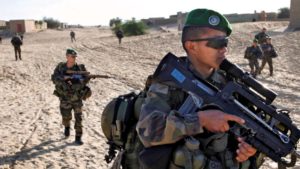 While often made fun of as the “White Flag Army”, France has a remarkably powerful military. Having the 2nd largest force in the EU, the 10th largest budget for it worldwide, and (though not counted here) the third largest nuclear arsenal worldwide makes it quite the powerful force. Of particular renown are the French Foreign Legion , whose candidates come from all over the world to prove themselves to be some of the toughest soldiers in the world, often refusing to give an inch until their last man has fallen. The forces of the French military (active and combined) reach just over 400,000 and nearly 1,300 aircraft, there are plenty of soldiers for France which don’t believe surrender is an option. Another of these groups is the famous GIGN, which acts both as a specialized counter terrorist force, as well as a special police service for particularly bad situations within the country. 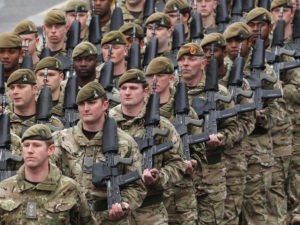 Harkening back to the days where the Sun never set on the British Empire, the United Kingdom still has one of the most powerful militaries in the world, partially due to their diversity in recruitment pools. Not only calling forth troops from North Ireland, Scotland, Wales and Britain, the British Armed Forces also carry a significant number of troops from as far off as Canada, Kenya and Nepal, the birthplace of the Gurkha’s, a force with one of the fiercest reputations in history. With a budget nearly as big as its territorial reach at around $60 Billion a year, the United Kingdom’s military is one of the most well-funded militaries on the planet. One surprise with the British Navy is that, while once considered the rulers of the sea, the current navy is under 100 ships, making it smaller than expected. 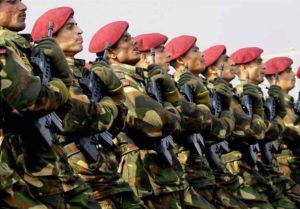 Making it just shy of the #3 spot, India took what was taught to them from the British Military and greatly expanded upon it. Holding no conscription, India at time of writing has by far the largest volunteer army of any nation of the world, and has proven time and time again they know how to use it. With a budget of over $53 Billion, and an air force of over 2,000 aircraft followed by a navy holding just shy of 300 ships, India does everything big. India has also been the single largest contributor to peace-keeping missions on behalf of the UN, and is one of three countries routinely allowed into foreign territorial waters to handle piracy issues, having earned the reputation of both skilled and well-disciplined sailors. While many other countries rely on their scientists to develop defensive technology with lesser acknowledgement of an even exchange for this research, India has routinely put using the military for scientific inquiry into the spotlight, including a wide variety of both expedition voyages and high-flying research studies. 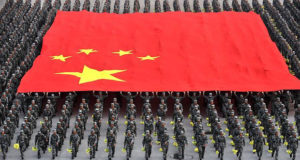 It should come as no surprise that the Chinese military appears so far into the list. Given the extremely large recruitment pool required drafting, at least in theory, nearly all of the Chinese population could be seen as a recruitment pool if demand required, though for most measures, an active force of around 2.5 million is usually considered a good estimate. With nearly 3,000 aircraft and 700 ships to its name, China is a major force to be reckoned with. However, more concerning for those who may have tense relations with China is their cyberwarfare division which has often been the ire of other militaries and even civilian companies. A prime example is that in 2010, Google suffered a hack that was later blamed on PLA unit 61398, which nearly caused Google to exit relations to the country.

Coming in as runner up, Russia has maintained it’s hold on second strongest force among militaries year after year. With a drive for near constant development in terms of both small arms and larger equipment, it is clear that Russia puts a high priority on manufacturing some of the strongest weapons on the planet, and learning from previous developments. With a force of around 2 million soldiers, 350 ships and nearly 10 times that many aircraft, it’s no surprise that historically Russia has been a force of concern for most of the world. These numbers are likely bolstered from the reputation Russia has on the ability to run black operations within countries to gain force multiplying advantages in key strategic areas. Similar to China, Russia also has a well cultivated military hacker community, which has become the sometimes scapegoat, sometimes nightmare of military personnel in the west for years, a logical extension of what the KGB was able to accomplish in previous generations. 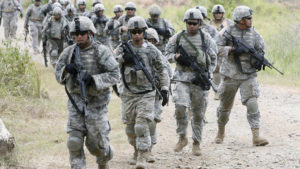 Topping off our list of most powerful militaries is the United States. While not the largest manned military at around 2.5 million active and reserve soldiers, the United States more than makes up for that with nearly 14,000 aircraft and 415 naval vessels to command. Similarly overwhelming is the budget allotted to the military, $581 Billion, which dwarfs every other singular country by a wide margin. Like many other countries present in this list, the US Department of Defense spends much of that on systems development to create ever more capable defense measures and train ever more competent staff. A leading force in both the UN and NATO, the United States is often seen as the most powerful and sometimes known as the police of the world, for good reason.