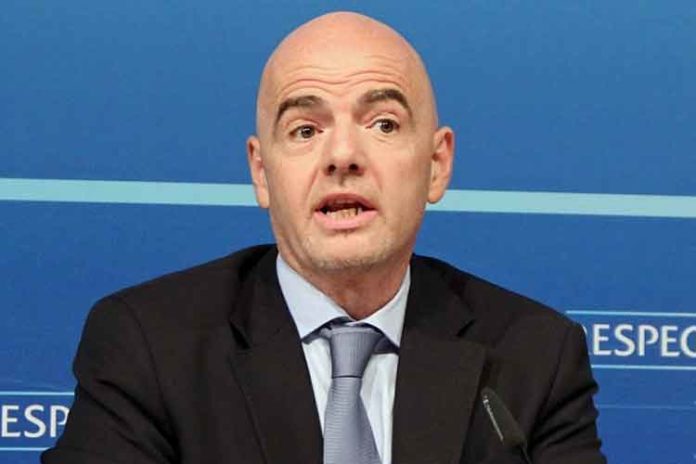 FIFA selected the hosts of the next two World Cups six years ago and while those countries are still making preparations for the big sporting event, the host of the 2026 edition will soon be selected. The US is said to be one of the countries interested but Trump’s recent travel ban could prevent them from hosting the tournament.

FIFA has warned that the travel ban could prevent them from hosting the 2026 World Cup, which will be different from previous editions as it will have more teams. The expansion was recently approved by FIFA and will begin for that tournament. FIFA has not voted for the host of the tournament but the US has shown interest in hosting it. The US hosted the tournament back in 1994.

The US is one of the candidates to host the 2026 edition but FIFA’s President, Gianni Infantino, said on Thursday that Trump’s executive order could invalidate a bid. Infantino told reporters in London that teams who qualify for the tournament need to have access to the country. Trump’s executive order temporarily stops the entry to the US for citizens of six countries. The countries are: Sudan, Iran, Libya, Somalia, Yemen and Syria. Iran qualified for 2014 World Cup.

The next World Cup will be hosted by Russia while the following tournament will take place in Qatar. Bidding for the 2026 edition has not started but the US is already seen as one of the favorites to host the event. The US has a number of stadiums and hosted the 1994 edition, making them a contender for 2026. In recent months, it’s been reported that the US and Mexico could partner to host the 48 team 2026 World Cup. A World Cup hosted by the US, Canada and Mexico has also been mentioned as a possibility.

Infantino also said that they are now in the process of defining the bid requirements. The FIFA President added that it’s obvious when it comes to FIFA competitions that the teams, fans and officials of those teams need to have access to the country.

The US submitted bids for the next two events but withdrew from the 2018 edition and was not selected for 2022. The 2026 edition will be different from previous editions as it will have 48 teams. The expansion, approved back in January, allows more teams to qualify for the tournament. Iran is the only country that has qualified for the World Cup out of the six that are part of the travel ban. The last appearance for Iran at a World Cup was in the 2014 edition.

The US hosted the World Cup in 1994 but they are contenders as FIFA has also said they want to have the tournaments in different continents. Russia will host the next World Cup while Qatar will host the 2022 edition, which means Europe and Asia won’t be favorites to host the 2026 edition.

In January, FIFA approved an expansion that adds 16 more teams to the tournament. The changes will begin in the 2026 World Cup and will give teams that have been very close to qualifying in the past a bigger chance to be part of the tournament. The 48 national teams will be split into groups of three and two of the teams will advance to the next round. It is the first expansion since 1998. In January, it was reported that FIFA would begin talks about the extra slots the following month. Africa and Asia are likely to get more extra slots.

The travel ban was rolled out back in January and the decision included seven countries. Mr. Trump then signed a new executive order on Monday and Iraq was dropped from the ban that prevents immigration. The executive order places a 90-day ban on the six countries. Iran, who has qualified to the World Cup four times, is one of the countries. The other five countries have never qualified to the World Cup but the approved expansion will give them a higher chance of qualifying. The US has plenty of stadiums and wouldn’t need to make much preparations for a World Cup but the travel ban could convince FIFA to vote for other options.