What Happened to Grace VanderWaal – Now in 2018 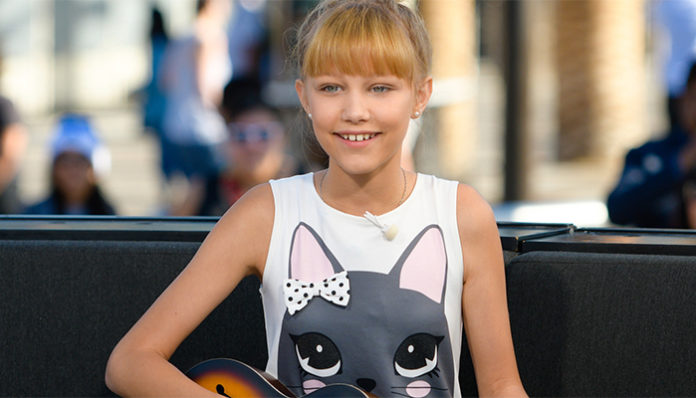 American singer-songwriter Grace VanderWaal is best known for being the winner of the eleventh season of the talent competition series, America’s Got Talent. Born in Kansas and raised in New York, the blonde began composing her own songs at the astonishing age of three. Continuing to do so into her preteen years, VanderWaal eventually found inspiration in the form of film- more specifically, she would pen songs while trying to imagine the feelings of certain characters.

At the age of eleven, she bought her first instrument- an ukelele, which she quickly taught herself how to play through a series of videos. From there, VanderWaal later picked up the saxophone as a member of the school marching band. Led by her fiery passion for music, she then started to play at various open events in and around her hometown. Growing up, her musical influences included Katy Perry, Twenty One Pilots, ad Jason Mraz.

Having garnered many years of experience through her casual music performances, VanderWaal eventually decided to try her luck in the NBC talent competition, America’s Got Talent in 2016. Only twelve years old at the time at the time of the auditions, she was undoubtedly one of the youngest individuals present at the try outs. Determined to succeed despite her young age, she decided to sing her own original song, I Don’t Know My Name for the auditions; a performance that earned her high praises from the show’s judges.

Having successfully showcased her abilities on stage, VanderWaal ultimately led Judge Howie Mandel to press the Golden Buzzer- which sent the young singer straight to the Live Shows; as such, the ukulele player did not have to participate in the Judges Cuts. Capturing the hearts of everyone with her charm and talent over the course of the show, her music ultimately led her to the show’s grand finale. One final performance later, the teen was declared as the winner of the entire competition.

The winner of season eleven, VanderWaal was awarded a $1,000,000 cash prize as well as the opportunity to headline a concert show in Las Vegas. Shortly afterward, she also headlined NBC’s America’s Got Talent Holiday Spectacular which aired in December of 2016. Later signing on with Columbia Records as a recording artist, she wasted no time in working on her official music debut. Prior to the end of 2016, VanderWaal released her extended play, Perfectly Imperfect, which was met with wide acclaim. Since her big win, she has appeared in a handful of TV shows including The Wendy Williams Show (2016), The Talk (2016), Access Hollywood (2016), and Today (2016).

What has the talented thirteen year old been up to since then? Has she been working on any new projects? Can we expect to see a full length album from her anytime soon? What about public performances? What happened to Grace VanderWaal? Where is she now in 2018? 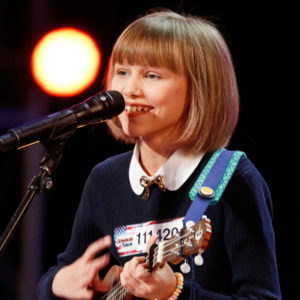 Born on January 15, 2004, in Kansas City, Kansas, Grace VanderWaal is the daughter of David and Tina VanderWaal; the youngest out of three siblings, she has an older brother named Jakob and an older sister named Olivia. Naturally gifted in the art of music, she began composing her own songs at the astonishing age of three. Home-schooled, the blonde spent much of her spare time immersing herself in music. Continuing to hone her songwriting skills over the next few years, she eventually found inspiration in the form of film- that is, she would write a song about the feelings of certain characters. Growing up, she has cited artists Katy Perry, Jason Mraz and Twenty One Pilots to be some of her biggest musical influences.

At the age of ten, VanderWaal took up the ukulele after being inspired to play by a family friend. Using her birthday money, she eventually bought the instrument, which she quickly taught herself how to play using online how-to videos. Shortly afterward, the aspiring musician also learnt how to play the saxophone as a member of her school’s marching band. Wanting to try her hand out at performing, she started to play at various open mic events in and around the Kansas area. Giving it her all, VanderWaal also decided to study music theory, which improved her overall songwriting.

Grace VanderWaal on America’s Got Talent 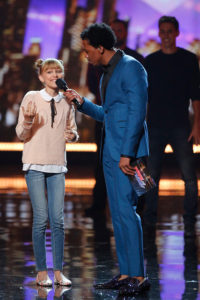 At the age of twelve, Vanderwaal decided to try her luck on the popular NBC competition series, America’s Got Talent- a show which she had grown up watching. Despite being one of the youngest performers present at the auditions, her performance of her original song, I Don’t Know My Name quickly captured the attention of the judges. Not only did it garner a glowing review from Simon Cowell, one of the show’s creators himself, but it also lead Judge Howie Mandel to press the Golden Buzzer- an act which sent the young singer straight to the Live Shows- leading her to effectively bypass the Judge’s Cuts.

Created by Cecile Frot-Coutaz, Ken Warwick and Simon Cowell, America’s Got Talent is one of the most notable reality talent shows that has ever graced the screens of American television. Part of the Got Talent franchise, every season features a number of performers (e.g. dancers, singers, comedians, magicians, etc), all of whom compete against each other for a chance to bring home a cash prize of $1,000,000. Debuted on the NBC Network in the summer of 2006, the show has received a number of industry accolades throughout its run including a nomination for a Primetime Emmy Award in 2011.

A contestant on the eleventh season, VanderWaal went up against a number of fellow competitors including the comedic jugglers The Passing Zone, magician Jon Dorenbos, variety illusionist Hara, contortionist Sofie Dossi, among many others. Premiered on May 31, 2016, season eleven’s judges consisted of Heidi Klum, Mel B, Howie Mandel, and Simon Cowell- the last of whom replaced Howard Stern. Much like the previous two seasons, it also featured the Golden Buzzer- a buzzer that when pressed, sends the performing act directly onto the live show; each judge may only use it once per season.

Following the Judge Cuts, only eighty acts were left from the original 100+. For the subsequent Quarterfinals, which spanned over three weeks, VanderWaal sany another original song while playing the ukulele, Beautiful Thing– a title dedicated to her sister; the episode aired on television on August 23, 2016. Met with a standing ovation from all four of the judges, Heidi Klum, Mel B, Simon Cowell, and Howie Mandel, VanderWaal quickly established herself as one of the front runners of the competition despite her young age. Having garnered enough votes from the public, she then moved on to the Semifinals. 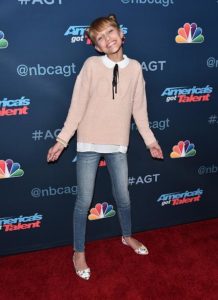 Having successfully earned a spot in the semifinals, the young singer eventually found hersef performing another original title, Light the Sky, which she accompanied with the ukulele. Another applause-worthy performance from VanderWaal, she was met with a standing ovation at the end of her song. By the end of the episode, six acts had been eliminated and sent home; the ukulele player however, had made it through to the Finals. Some of the other finalists include comedian Tape Face, opera singer Laura Bretan, magician Jon Dorenbos, and Mentalists The Clairvoyant.

One of only ten contestants left during the Finals, Vanderwaal chose to sing Clay– another original piece which she had written herself, as her Finals song. Broadcast-ed on September 13, 2016, the episode also saw performances from all nine of the other acts, all of which received a standing ovation from the show’s four judges; unlike the previous rounds, no acts were buzzed.

For the grand finale which aired on September 14, 2016, Grace VanderWaal took to the stage with her original classic, I Don’t Know My Name– the same song that had earned her a spot in the competition during the auditions. Soon after, it was revealed that she had made it to the top five instead of fellow contestant, Sofie Dossi. From there, it was later announced that she had actually finished first, making her the grand champion of the season; ranking behind her were The Clairvoyants in second place, Jon Dorenbos in third place, and Brian Justin Crum in third place.

Grace VanderWaal After America’s Got Talent

After winning the competition, the young star revealed that she would be using part of her cash prize to purchase a tree house, and to make a donation to a charity. On television, she was also invited onto a number of TV talk shows such as The Tonight Show Starring Jimmy Fallon and The Ellen Degeneres Show. Shortly afterward in October of 2016, she headlined a handful of sold-out concerts win Los Angeles, after which she performed on NBC’s America’s Got Talent Holiday Spectacular event. 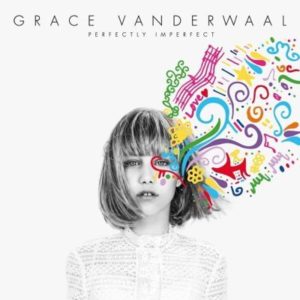 Eventually signing with Columbia Records later that fall, she soon started to work on her debut EP that October. Perfectly Imperfect, as it was titled, was made available on December 2, 2016. Recorded in New York, its production was handled by Greg Wells, who also helped to mix the tracks. Approximately 17-minutes in length, it came with five songs including I Don’t Know My Name, Beautiful Thing, Light the Sky, Clay, and Gossip Girl, many of which had been featured on America’s Got Talent; a bonus track entitled, Missing You (Coffeehouse Version) was also included in a Walmart exclusive version of the EP.

Relatively successful, Perfectly Imperfect entered the US Billboard Top 200 at number two; it also reached number four on the Billboard Digital Albums Chart. Outside of the US, it also reached number eleven on the Canadian Albums Chart and number two on the New Zealand Heatseekers Album Chart. Met with praise from critics, many of which lauded the EP’s powerful ballads, it spawned the single, I Don’t Know My Name.

Hailed as one of music’s hottest starts under twenty one by Billboard Magazine, she held a number of shows in promotion of her EP including at the New York Knick game which took place in Madison Square Garden; in addition, she also performed two of her original songs at Macy’s 2016 Thanksgiving Parade.

Although she’s been busy working on a new album (she has said that it will be less acoustic than her EP), she has made the time to appear in a number of events this year, including at the top of the Empire State Building for Valentine’s Day. This March, VanderWaal also sang at two charity events- the first of which supported young people’s commitment on social issues; the second of which was for a benefit gala held by Cirque du Soleil at a Las Vegas hotel.

Talented beyond her years, she was also one of the finalists at the 2017 International Acoustic Music Awards for the category of “Best Female Artist”. Soon afterward, she was also nominated for Radio Disney Music Award.

If you’d like to stay in touch with the former AGT winner, you can do so by following her on social media- you can find Grace VanderWaal on Twitter or Instagram at @gracevanderwaal.