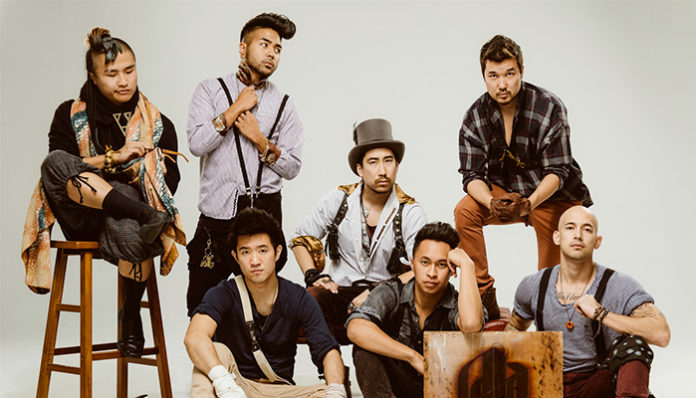 Quest Crew, a Los Angeles-based hip hop dance crew, first gained international recognition after winning the third season of the MTV competition series, America’s Best Dance Crew. Named after the Quest Learning Center in Artesia, California, where they spent much time practicing, the crew consists of twelve members: Daniel Ryan Conferido, Brian Hirano, Andy Luo, Aris Paracuelles, Dominic Sandoval, Lydia Paek, Hokuto Konishi, Victor Kim, Adil Khan, Nick Teti, Ryan Feng, and Steve Terada; Lydia is the only female of the group. Prior to the formation of Quest Crew in the late 2000’s, many members of the team performed with the SickStep dance troup; after they disbanded, the dancers came together to form the hip hop group which they are known as today. Prior to attaining widespread fame in America’s Best Dance Crew, they performed on the funraiser campaign, Idol Gives Back in 2008. The following year, they competed and later won the championship title in the MTV dance competition series.

Aside from having participated in America’s Best Dance Crew, a few members of Quest Crew also appeared on the Fox dance competition, So You Think You Can Dance in the late 2000’s. More specifically, Hok and Ryan auditioned for the first season; Hok later auditioned for the second season once again alongside Victor and Steve. Although Hok was a tough contender in the show, issues with his student visa later caused him to be dismissed from the contest. Persevering, he later tried out again for the third and fourth seasons, although he never got past the top ten. Many years after they first showed off their dance moves to the world, Quest Crew was recognized with a Prime time Emmy Award for the category of “Outstanding Choreography” for their brilliant routine in Runaway Baby/Take U There in 2016.

Six years after being declared the winners of MTV’s hit show, Quest Crew once again competed in the eighth season of America’s Best Dance Crew, which premiered on the network in the summer of 2015. After countless dance offs with other crews such as Kinjaz, Super CR3W, We Are Heroes, and Elektrolytes, they once again proved themselves to be the best, having received the winner’s crown during the sixth and final episode. Since then, they’ve been featured as guest performers in a number of popular TV programmings such as The Ellen Degeneres Show, The Tonight Show with Jay Leno, Dancing with the Stars, and at the 2016 Creative Arts Emmys. In 2010, a few of the crew members even performed as back up dancers for Usher’s performance during the NBA All Star Game.

So what has the award-winning hip hop dance group been up to recently? Are they still actively performing on television? What new projects or endeavors have they been busy with as of late? What happened to Quest Crew? Where are they now in 2018?

The History of Quest Crew and its Members 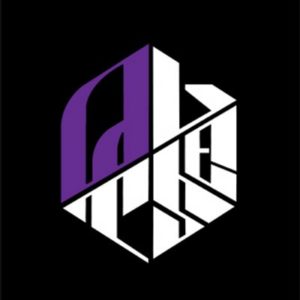 Named after the Quest Learning Center, an institute where they spent much of their time practicing, a few of its members originally performed as part of a dance troupe called SickStep. Following their disbandment, they decided to recreate another group and thus the hip hop crew was born. Although their dance line up has changed many time over the past years, their current roster consists of nine members- Hokuto Konishi aka Hok, Steve Terada, Ryan Fend, Dominic Sandoval, Ryan Conferido, Brian Hirano, Rudy Reynon, Aris Paracuelles, and Joe Lee. Some of their past members include: Victor King, Lydia Paek (who was the only female in the group), Andy Luo, Aichi Ono, Nick Teti, and Adil Khan.

Created in 2006, Quest Crew was created through creative drive, friendship, and a thirst to perform. Since they first started dancing together, they’ve crossed many achievements off of their list- one of the most well known being that they attained the winner’s title on the MTV reality dancing competition, America’s Best Dance Crew in 2009. Following several scattered auditions and performances in various other shows such as So You Think You Can Dance?, they once again emerged as the winner during the eighth season of America’s Best Dance Crew. Most recently in 2016, Quest Crew was nominated for a Prim etime Emmy Award for “Outstanding Choreography”, which they later ended up winning- which is a huge feat for the group. 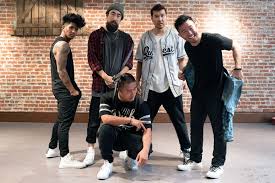 The brainchild of Howard and Karen Schwartz, America’s Best Dance Crew originally premiered on February 7, 2008. Produced by American singer Randy Jackson- a former American Idol judge, each season features a group of competitors, all of whom showcase their talents in front of a panel of judges for a chance to grab the winner’s title, a golden ABDC trophy, and a $100,000 USD cash prize. Each week on the show, the crews are presented with a different challenge; although the challenges differ for each group, they typically all share a general theme. At the beginning of every episode, the show’s host Mario Lopez starts off by revealing which dance crews are safe, and which are at risk for elimination- those placed at the bottom then perform their dance routines, after which the judges will decide which will stay, and which will be eliminated.

Another noteworthy aspect of America’s Best Dance Crew is that each dance crew has their own banner that represents their members; it is often shown during their respective performances and interviews. When a group is eliminated from the competition, their banner logo, which is usually hung from the top of the stadium falls to the ground. Prior to departing the show, the eliminated team also gets a chance to dance it out a final time as they “walk it out” to the song played on stage.

One of the contestants of the third season, Quest Crew went up against numerous talented dance groups including Beat Freaks, Boxcuttuhz, Dyanamic Edition, Fly Khicks, G.O.P. Dance, Ringmasters, Strikers All-Stars, and Team Millennia. Originally premiered on MTV on January 15, 2009, its panel of judges that season consisted of Lil Mama, Shane Sparks, and JC Chasez. Hosted by Mario Lopez, the season also featured television host, Layla Kayleigh as the backstage correspondent. During the series premiere, each group was given the opportunity to perform to tunes of their own choosing, after an eventful episode, Quest Crew found themselves safe from elimination while G.O.P. Dance were eliminated from the show.

In the second episode known as the Fit Test Challenge, each crew was given a physical exercise to incorporate into their respective dance routines. For the Quest Crew, they were tasked with incorporating kickboxing into their routine, which they successfully pulled off. After all the groups performed on stage, Team Millennia and Boxcuttuhz ended up being in the bottom 2, with the latter being subsequently eliminated from the competition. Over the next four episodes, the hip hop group buzzed through the different rounds, never once having fallen to the bottom. During the seventh episode, which originally aired on February 26, 2009, the crews competed against one another in a Last Chance and Hip Hop Decathlon Challenge; following the event, Quest Crew fell to the bottom two for the first time since the start of the competition.

During the live grand finale, which was broadcasted on March 5, 2009, Dance Crew performed to Theo Flo Rida’s, Right Round and ultimately came out as the winner of the season; Beat Freaks were the runner-up. 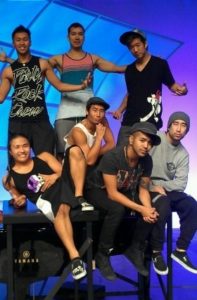 Six years after this initial win on the show, Quest Crew once again auditioned for, and made it onto the eighth season of America’s Best Dance Crew. Unlike previous seasons, the eighth season is unique in that it welcomed back five of the show’s previous winners. Premiered on MTV on July 29, 2015, Jason Dundas served as the host while Frankie Grande, Teyana Taylor, and T-Pain served as the Judge’s panel. One of the six dance crews competing against each other, the hip hop group went up against Kinjaz, Super CR3W, We Are Heroes, Elektrolytes, and I.aM.mE.

During the first episode, all six groups incorporated songs from MTV Video Music Award-nominated artists into their dance routines; while they all went to the next round, We Are Heroes were faced with possible elimination after falling to the bottom. The following episode, each dance crew was assigned a VMA Icon and told to perform to a track from their catalogue; Quest Crew ended up dancing to Chris Brown’s Turn Up the Music, which proved to be a success as they once again avoided the bottom two.

During the third episode, each crew on the show were told to incorporate a sense of fashion into their normal routines; dancing to Bang Bang by Nicki Minaj, Ariana Grande and Jessie J, the group unfortunately fell to the bottom two for the first time, alongside Elektrolytes- the latter of which was eventually eliminated from the show. On the next episode entitled, Crews’ Control Challenge, each of the remaining teams had to compete against one another in two different challenges; after the event was done and complete, Quest Crew once again fell into the bottom two, although they ultimately were saved from elimination. Following a heated dance off during the competition’s semi-finals, the three finalists- Quest Crew, Kinjaz and Super CR3W, performed one last routine prior to the announcement of the winner. After a stunning display of dance moves to Afrojack’s hit song,SummerThing!, Quest Crew was announced as the winner of season.

Quest Crew on So You Think You Can Dance 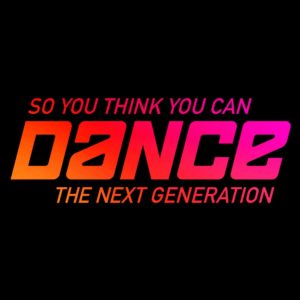 Throughout the years, several of their members have also appeared on the Fox dance competition series, So You Think You Can Dance. For instance in 2005, both Hok and Ryan auditioned for the first season of the show with a former crew member from Sick Step. Although the former did not end up making it onto the show, Ryan ultimately made it to the finals, before falling out of the competition.

The next year, Hok, Victor Kim, and Steve Terada all auditioned for the show’s second season, it being Hok’s second try for the show. While Victor and Steve both ended up being eliminated in the choreography challenge, Hok successfully made it to the top twenty- although complications with his student visa ultimately rendered him ineligible to be employed, causing him to be subsequently dismissed from the show.

After obtaining a US work permit, Hok once again tried out for So You Think You Can Dance, alongside crew mate Dominic Sandoval. Although both ended up making it to the top twenty, Hok was eventually eliminated during the fifth episode while Dominic was eliminated in the seventh episode. Following that, both dancers went to tour with the rest of the competition’s top ten dancers. In 2008, Victor tried out for the show’s fourth season but was ultimately eliminated during the initial rounds.

Most recently, Quest Crew hit the limelight after winning a Prime Time Emmy Award for “Outstanding Choreography” in 2016. In an emotional interview after the ceremony, the group accredited So You Think You Can Dance to much of their success, that “if it wasn’t for [the] show, [the crew] wouldn’t be [at the Emmys].” While it’s only their first major award win, with their dedication and talents, we wouldn’t be surprised to see them landing another award sometime in the future!

Stay tuned for new dance routines from the award-winning hip hop crew! If you’d like to stay up to date with what’s been happening, you can do so by following them on Twitter at @TheQuestCrew.